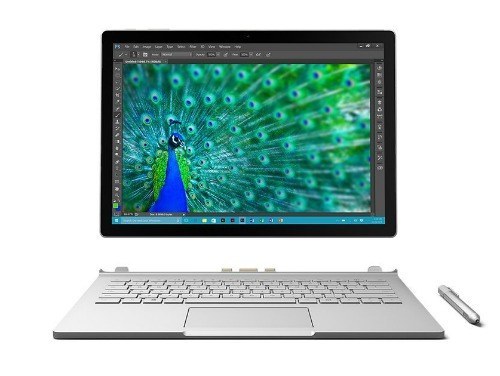 See it at the Microsoft Store.

UPDATE: Many users have had a short battery life and other problems. Microsoft last issued and update on Dec. 2 and 17th,  but the power management has not been addressed. Their suggested workaround, is to not use sleep mode, where the battery drains, but rather hibernate. Windows Hello may be the core of the problem.. You can say good-bye to Hello by shutting it off in Settings> Accounts > Sign-in options.

UPDATE #2: Another firmware update has been released for the Surface Book and Surface Pro 4 on Jan. 27, 2016. This one is for Bluetooth, battery, and fingerprint sensor, but though the battery drain issue anecdotally is better, it’s still there. To see more about updates, check this page on Microsoft’s site.

The camera on the Surface Book and Surface Pro 4 is compatible with the Hello Windows facial recognition software that lets you use your face instead of saying “Swordfish” (or typing in a password) The Book does not have a fingerprint reader, so you can’t log in that way; only the fingerprint-reader model of the Onyx SP4 Type Cover does.

The discrete graphics are in the keyboard case, so when you detach the keyboard, the Book will switch back to regular integrated graphics, which are strong enough to do most things, but if you are using 3D programs and the like, you would need to flip the screen over and keep the keyboard on.

The Gorilla Glass display is super sharp, with 6 million pixels at 271 ppi (same ppi as in the slightly smaller Surface Pro 4, which has about 5 million pixels). Microsoft claims it will get the entire sRGB color gamut. The blacks are deep. The screen is 12.3 inches wide, and 13.4″ diagonally, with a small bezel. Its 3:2 aspect ratio is intentionally made to the proportions of a standard A4 sheet of paper. The screen is 21% larger than on the Surface Pro 4.

At about 3.4 lbs. including the keyboard and pen (pen weighs 21 g or about three-quarters of an ounce), it would start to feel heavy after carrying it around for a short time–maybe consider a rolling laptop case. The clipboard (tablet) without the keyboard weighs 1.6 lbs, quite light.

Microsoft says then when the lid is down, the battery will not drain.

To draw and get the longer battery life, you can remove the screen then flip it around and re-attach it to the keyboard so the screen is facing up. (see Update above for notes on widespread battery drain issues)

Call me Clipboard. Microsoft is calling the tablet part of the computer the “clipboard,” lest you forget to think of the Surface Book as a laptop. It’s first a laptop, second a tablet. Got it?

Good-bye, pen loop. The pen now snaps to either side of the clipboard via magnets.

The innovative accordian-like hinge that Microsoft calls “dynamic fulcrum” gives a rounded edge, making it more comfortable to hold in your palm than a rectangular edge. When shut, there is a small gap between the keyboard base and screen. The hinge uses a wire dubbed “Muscle Wire” as part of the sinew that holds the two halves together. The hinge is strong and you can pick up the whole device by the keyboard or display. You can also open the Book to any angle. The Surface Book does not have the stand attached to the back that the Surface Pro line has, so if you want to prop up the tablet, er, clipboard, alone, you will have to use an exterior stand.

One Microsoft Surface Book review found that having the gap between the keyboard and clipboard was a problem when carrying it in a bag–dust and dirt would end up on the keyboard. So storing it in a laptop sleeve might be a good idea. 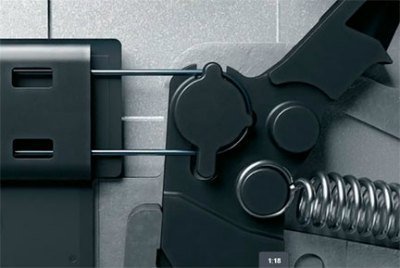 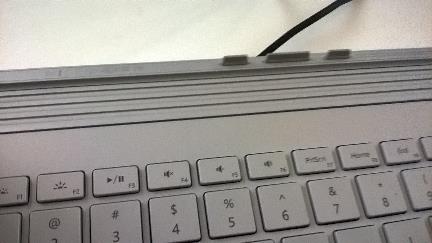 To detach the clipboard, you press a button on the keyboard. If you’re using the Nvidia graphics, which will cease to work once you take off the keyboard, you will see a notification. 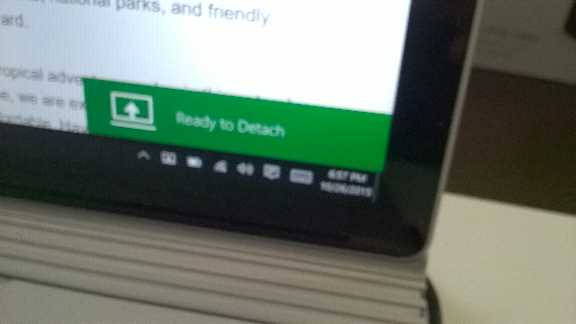 You hold down a key on the keyboard for a couple of seconds until you see this pop up. You will get another message when you have successfully attached it. The detaching/attaching process is not super simple.

Microsoft calls it a “continuum” when you take the clipboard off to continue using it. 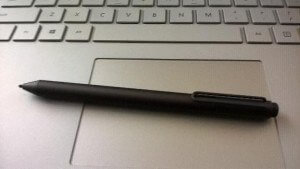 The large, glass trackpad with 5 touch points feels great on the fingers–it’s smooth and responsive, like skating on ice.

When in laptop mode, you cannot open up the whole thing flat the way you can with a regular clamshell laptop. So if you’re drawing, you either need to somehow draw with the clipboard up, or switch to tablet mode, which gives you no access to the keyboard. You can’t use the keyboard base unless it’s attached. So if you want to use keyboard shortcuts, you will need to use the on-screen keyboard, a USB or Bluetooth keyboard, or try some Photoshop actions.

Despite the Surface Pro being laptop-first, when in laptop mode the clipboard wobbles  a bit. The keyboard base and the tablet are roughly equal in weight, but it seems it would balance better were the screen considerably lighter than the keyboard. However, it isn’t too bad.

Blue Surface Pen. The one that comes with the Surface Book and Surface Pro 4 is silver.

The new Surface Pen is a great improvement over the old. First of all, it now has 1,024 levels of pressure sensitivity (after Microsoft spent some time assuring us that 256 was fine and most of us agreed). It’s still N-trig (Microsoft has purchased the technology behind N-trig, so it’s here to stay, and it’s nice to see them improving it with artists in mind). There’s  now a cushiony eraser on the back. The pen has only one button now; the previous pen used one of the buttons to activate an eraser. You can click to open OneNote or double-click to take a screenshot and put the image into OneNote.

Best of all, the pen comes with 4 nibs, including artist pencil nibs of 2H, H, HB, and H, and a fine-point pen. HB is the preinstalled tip. The nibs have some friction, giving some tooth to the drawing experience so it feels more like paper. The old pens did not come with extra nibs, the nibs didn’t last long, and there was no way to replace them; you had to buy a new pen. The pen takes one AAAA battery. Microsoft says this pen will have reduced latency (less lag). Testing it, it still has some lag, perhaps a bit less than the SP3. The pen has a solid heft to it. 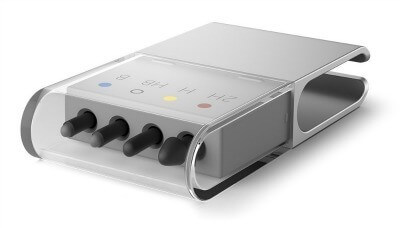 Because of the replaceable nibs, this new pen should last much longer; it’s more economical and less wasteful. If your nibs wear out or get lost, you can buy an extra nib kit. It’s backward-compatible with the Surface Pro 3 (with which you would still get 256 levels of pressure sensitivity) and will also work with the Surface Pro 4 (which gives you the full 1,024 levels). Microsoft claims the pen has a full year of battery life. The pen barrel comes in five colors– charcoal, blue, red, silver and gold. The Surface Book and Surface Pro 4 come with the pen, but not the nib kit, which is inexpensive. If you buy an additional pen, that pen will come with the nib kit. 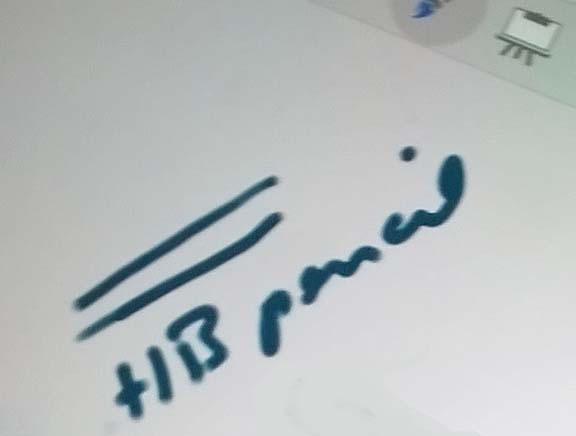 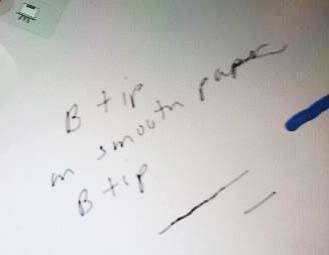 B tip on smooth canvas in Fresh Paint 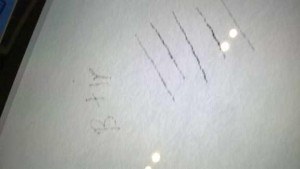 B tip on rough canvas in Fresh Paint

The B tip does look more like a pencil line. You can choose a brush that says, say, 4H and still use the 2B pencil, which I find a little hard to wrap my mind around. Every brush you choose will look a bit different with the different nibs.

Writing with the Surface Pen is not bad, but isn’t quite as natural as on paper–harder than with Wacom, but easier than using an iPad with a basic capacitive stylus.

When using the eraser tip, the eraser size doesn’t adjust in OneNote, it wipes out a large area, but in art programs it’s adjustable.
The issue with slowly-drawn diagonal lines being wavy is still there, and it’s just a function of the digitizer and the rate at which it “polls” the data. There are some ways to fix it, such as using Lazy Nezumi or a line smoother such as in Manga Studio. Or just draw lines more quickly. There is a definite and palpable improvement with the new pen and increased pressure levels. To me, N-trig is still not as satisfying as Wacom to draw with but it’s not because of the jitter. However, many artists really like N-trig. It’s best to try it out. The Surface Book is an ambitious concept and I hope we see more laptop-first tablet PCs with detachable tablets as these are ideal for drawing.

If you want a more solid keyboard, a larger drawing surface, or if the discrete graphics are important to you, then the Surface Book would be the way to go. It also is just nice-looking. It certainly could be a solution to the artist who wants a laptop too.

If you’re interested in the history of PixelSense tech, here it is on Wikipedia.

2 thoughts on “Microsoft Surface Book Review: a laptop-first 2-in-1”