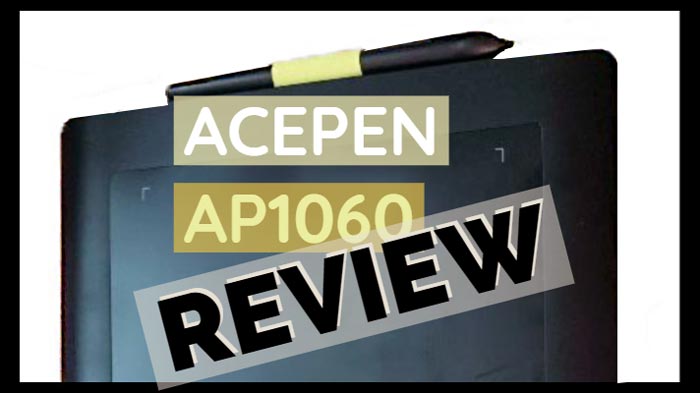 Acepen, located in China, makes a wide variety of drawing tablets. They were kind enough to contact me and send me their AP1060 graphics tablet to review. It’s an affordable tablet comparable to the Wacom Intuos.

Graphics tablet. Opaque black tablet, draw on it while looking at screen. Works with Mac and Windows. I used it on Windows 10 and Mac Mohave.

(in a rush to see more reviews and info? Go to Amazon to see the Acepen)

The tablet is solidly built of plastic. It doesn’t feel hollow. It’s not made of the most premium materials, buy it’s sturdy and has some heft. The shorter sides curve downward, while the long sides have an edge. It rests on four small rubber dots. The bottom has 8 screws. The USB port holds the connector tightly, it’s not loose (more on this later). 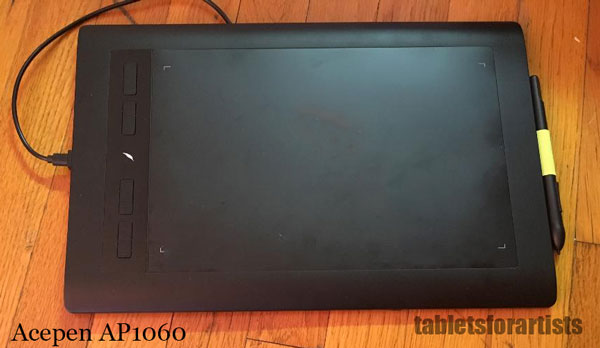 I like the bright yellow fabric pen loop on the side, it’s easy to see. I didn’t have trouble fitting the pen into it as with some pen loops. The pen needs to go in thin side first. My package came with a driver mini-CD, but I used the one from the Acepen site. 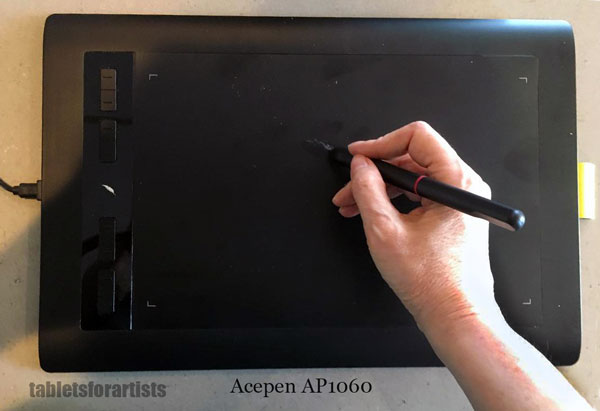 Drawing on the Acepen graphics tablet

Pen loop on side of tablet

Drivers can be downloaded from Ace Pen site

Lightweight and thin, and doesn’t need an external power supply, only the USB cable, so very portable.

You can “rotate” the tablet in the driver so that you can physically rotate it to have the buttons on the right side, so it’s fine for left-handed people.

The batteryless pen is nice, easy to grip, and light but not so light it’s flyaway. It’s got a tapered shape and is about the size of a fountain pen. Because the pen is passive, no batteries are needed. You get 8192 levels of pressure, which is the maximum of any device on the market. There’s no eraser end. 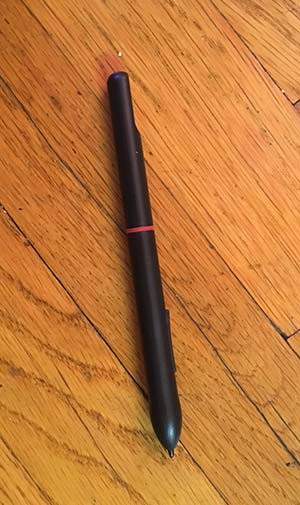 The Ace Pen 1060 came well-packaged printed box. The side says 1060N (I’m not sure what the N stands for). The innards were packed safely. A quickstart booklet with different languages is included. There’s also a thank-you card with contact info for the company (card is not in my photo) 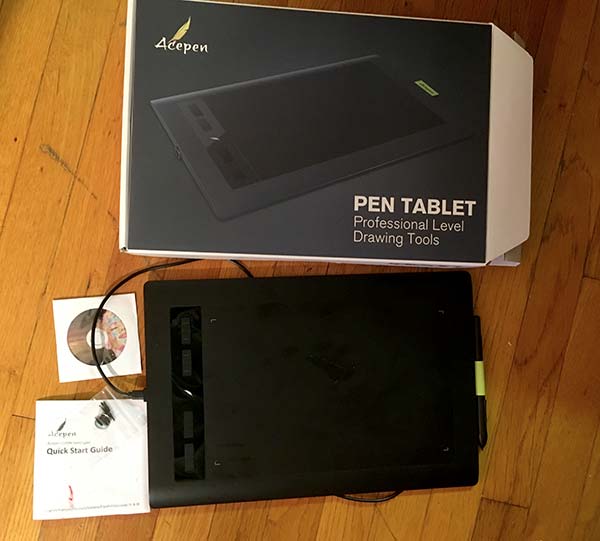 The design is attractive, with buttons along the side. and over an inch of bezel all around. I like the smooth slope of the long sides.

The first thing I noticed was the shiny surface of the tablet. That’s a removable protective film. There’s also a removable film over the black plastic strip the buttons protrude from. Once removed, that strip is sleek and shiny.

The LED light is, cleverly, a small feather that’s like the company’s logo. The fabric pen loop is a nice and useful touch that most tablets don’t offer. It’s easy to put the pen in (thinner part first), and once in, it’s snug.

The tablet has a total of 8 hotkeys, all on the tablet surface. 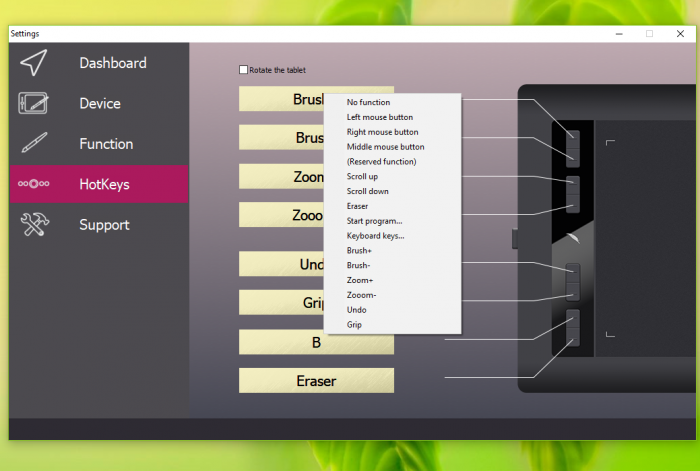 Before you install the Ace Pen 1060 driver, be  sure you have uninstalled any other tablet drivers you have installed. (If you’re using a tablet PC, leave the drivers that came pre-installed with your tablet PC as they are.)

I used the driver from the Acepen site rather than the included CD. The latest versions of drivers will always be online.

Installing it was simple onto both Windows and Mac. With Mac Mohave you have to remember to allow third-party programs to be installed.

The driver created an icon on my desktop generically named Tablet Digitizer. Opening it, the Windows driver had some nice color graphics with shading, while the Mac version used the more common black-and-white outline drawings.

Be sure the micro USB is fully inserted into the tablet. If it’s not, you will get a blinking LED light o the LED indicator between the buttons. The  tablet’s USB port is secure, no slippage.

After installation, the driver guides you to restart. You can then connect the tablet.

Customizing the buttons worked and was very simple. You simply right-click in Windows to open a menu and choose your favorite shortcuts. You can’t customize on a per-app basis.

The LED light on the tablet goes on when the pen makes contact with the surface.

You can rotate the tablet in the driver for left-hand or other use. You can also map it to the monitor.

Like most tablets in the affordable range, there is no touch function, no tilt sensitivity, and no wireless option. Note: the company says it’s working on adding tilt.

What this tablet does offer that most in the affordable range don’t is a fully customizable pen button. You can program it to your favorite keyboard commands.

I tried some (not all) customizations with the tablet and pen buttons and they worked fine.

You can adjust the pressure from firm to light in the driver. 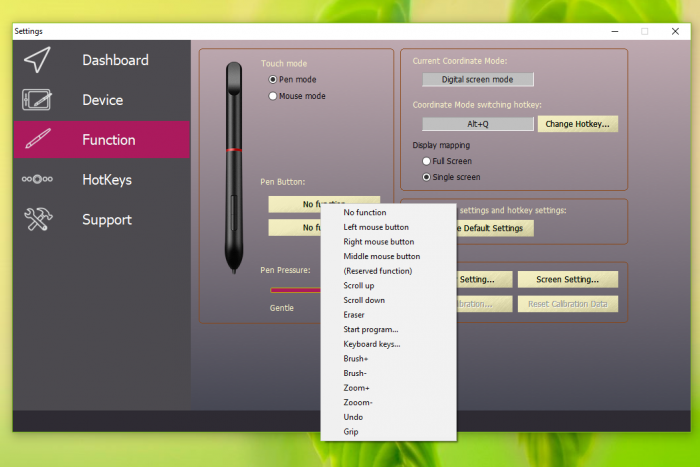 The drivers were easy to install, but on my Windows, sometimes I can open the driver without the tablet connected and other times I cannot. Another time, I had to click Run as Administrator. This hasn’t affected the functioning, but I prefer more consistency.

When I tried a working micro USB that did NOT come with the tablet, I had some connectivity issues, getting a blinking LED light (I don’t know the brand of USB). I then switched back to the one it came with and it worked again. The company has mentioned that the tablet does not always work with cables that did not come with it. They don’t sell replacements.

Obviously, if someone loses or breaks the USB, this could become a problem. So I ordered a new micro USB cable to test it. I picked this Amazon Basics micro USB, and it works fine. I now feel better knowing I can reorder a micro-USB if I need to.

Windows: I tried out Photoshop, Sketchbook, Krita, Paint Tool SAI, and GIMP. Got a very small lag in Photoshop. The driver was pretty sensitive in Photoshop (going from thick to thin quickly).

Like other tablets besides Wacom, you can use the Ace Pen with vector programs such as Inkscape and Illustrator but doesn’t give pressure sensitivity in Illustrator. You can use SAI vector layers with the Ace Pen  if you want pressure in vector drawing.

Note:  Sketchbook, GIMP, Inkscape, and Krita are all free and can be downloaded online.

The size is enjoyable to draw on, big enough to not feel cramped.

The tablet surface tended to attract fingerprints and oils from my hand (the weather has been very humid during testing). The package didn’t come with a glove or cleaning cloth so you may want to get those, especially the glove.

The tablet has a very slightly beaded surface that’s pleasant to draw on, not slippery or  bumpy. I do miss the rubbery feeling of Wacom Intuos Pros, but the affordable tablets never have that. The pen makes a little bit of noise but not too much.

I do wish there was some space between each button rather than having four pairs (it looks like four buttons but is actually eight), as if you hit one button you might hit the one next to it by accident. But it was easy to get used to and hit the buttons correctly.

The pen (which the company calls a Monet pen)  is pretty stylish and easy to grip. It’s not too heavy or too light.  The pen buttons are easy to get to. I don’t feel at all like I need a grip to help hold the pen.

Reading other reviews, most of them are very positive about the pressure sensitivity, value, and overall experience. A few experienced issues with connectivity and drivers.

May not work with cables it did not come with
Design of buttons could leave more space
Attracts fingerprints
Driver hiccuped, though no major issues

Comparing the Ace Pen 1060 drawing tablet to the pricier Wacom Intuos, you get a better bang for your buck with the Acepen. You get more levels of pressure and the same resolution, speed, and accuracy. The regular Intuos has 4096 levels and doesn’t have tilt either. (Again, Acepen is planning to roll out tilt).

You don’t get bundled software as you do with Wacom.

The driver for the Ace does almost as much, though doesn’t let you save commands for separate art programs or some other, small features of Wacom.

Comparing it to the Intuos Pro, which is far more expensive, you don’t get tilt, touch, wireless, or bundled software, or app-specific customization, or the ability to use different kinds of physical pens. So the Acepen is more comparable to the regular Intuos but has more pressure levels and may later get tilt.

It’s a good starter tablet for students and can be used for professional art as well. The feature of having customizable pen buttons make it stand apart from most Wacom-alternative graphics tablets. It gives you a generous size and many of the same features Wacom has while not busting the budget. There are plenty of free art programs online you can use with it.

The USB port thing could be a problem but I’m glad I found one that works with it that I can order anytime.

I’ll continue to use this and take advantage of the high levels of pressure and customization.

See the Acepen AP1060 on Amazon

To buy on Amazon Japan:

Learn all about tablets for art