This week saw the Astropad app launch. Its pitch is that it can “turn your iPad into a professional graphics tablet.” Now your iPad becomes an input device.
It works over wifi or a USB. It can handle up to 60 frames per second, fast enough for animation and video (though not for sophisticated gaming, but you wouldn’t create or play those on the iPad). 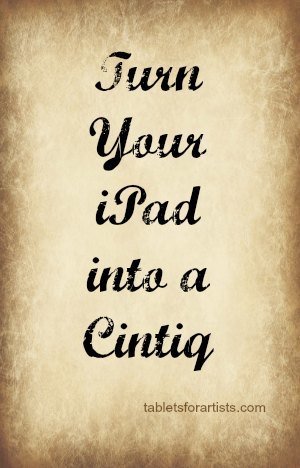 To use Astropad, you need a Mac that runs 10.9 (Mavericks) or later and any iPad running iOS 8. Watch a video here.

It’s using your iPad as a graphics tablet/input device–so what’s on your Mac will be mirrored on your iPad.

Pressure sensitivity is dependent on your having the iPad styluses that are best for art, as well as the apps that give you the sensitivity.

Besides regular iPads, it works with the iPad Pro with the Apple Pencil.

If you use an iPad Pro, you’re getting a lot of the functionality of a Cintiq, though it doesn’t do all the same things.

It would be nice if Apple itself made more iPad and Mac compatibility, but it took the Astropad developers, who run an independent studio, to do it. Perhaps next comes a way of hooking up Android tablets.

You can download a 7-day trial from the Apple store.

Duet Display is an iPad app that’s similar but works with both Windows and Mac.

4 thoughts on “Astropad: Turn your iPad into a Cintiq?”