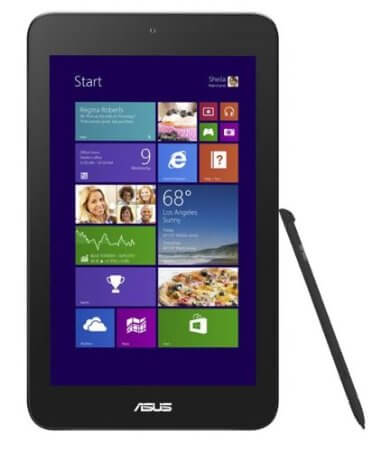 This tablet is quite exciting because it has the Wacom digitizer at a much lower price point than a Cintiq or any tablet where you draw on the screen that also has full Windows, as opposed to Atom or Android. It’s comparable in size and price to the iPad mini, but iPads lack  pressure sensitivity and can only run apps, not full programs. (Also, this tablet would let you watch Flash videos without an app.)

Small, 8″ slate tablet. A Bluetooth keyboard can optionally be added.
Unlike some tablets of the same size that run Atom or Android, this one runs full Windows 8.1.

This would be all right for the left-handed, but you should use the stylus for commands as it could be in inconvenient to use the multitouch with conventional Windows menus being on the left. Also, the screen is small, so whether righty or lefty, the stylus is easier.

This small tablet packs quite a punch as far as features–namely, the Wacom digitizer and pen, and full Windows make this a nice choice for artists, and it’s the reason we chose to review it. The Windows start button is on the left edge, which can be hard to find. One the right side opposite it is the sleep button, so you have to remember which is which. 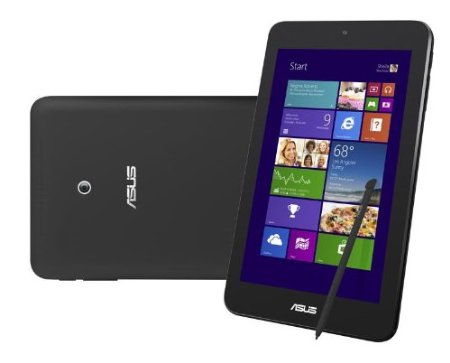 The screen is not that high-resolution. It can’t be compared to something high-res like a Cintiq 13HD, but for the price, it’s not bad. If you, for instance, make Print on Demand cards, the screen is larger than the card, and you could zoom in while drawing. You could create comics for online or print. Not all digital art needs a large monitor. The screen does attract smudges so I suggest a smudgeguard glove, screen protector. Built-in palm rejection favors the stylus, so you can hold the tablet while drawing without your hand causing anything to happen. The screen has is multitouch. It’s quick and responsive to pen and touch, and has good viewing angles. Smooth glass goes from one edge to the other with no lip or plastic border.

The pen comes neatly tucked into the stylus, which is good news. It’s fine for drawing, and handwriting, but you might do more precise work with a larger pen.

The Windows button and power button are on the sides, which can be a bit confusing. The Windows key is on the left edge. The camera is in an unusual place, right in the vertical center on the back. There’s no video output; you’d need an adapter.

Comes with One Note, Microsoft Office, and you can use any Windows programs, including Photoshop, Illustrator, etc.

This has good reviews on Amazon, with people praising its. One Asus Vivotab Note 8 review said the battery lasted for 12 hours, and many said all day. Some said it is more useful than their Ipad (which makes sense, as it can do a lot more, though you will have to deal with things like Windows updates).

Unfortunately, there were some negative notes as well. In particular, this model has issues with the pen suddenly stopping working, and there is a very long thread about this here. So if you do buy this, it’s good to get it from Amazon because they have a 30-day return policy and make it easy to make returns, and the problem usually happens sooner. The extended warranty is a good idea too. I wish I could write an unreservedly positive Asus VivoTab Note 8 review, but because of the many customers who had issues with it, I have to say buyer beware. As it is, it’s not the most powerful tablet in its class, but it’s the only one so far that has the Wacom digitizer, so it’s an exciting development for artists on the go and for artists on a budget. If you get one with no problems, and you don’t mind the small size, this could be a joy.

Rubberized back can take a fall

No HDMI out, but can use an adapter

Some devices have been failing for some users (see Consumer Ratings and Reviews, above)

If you get one without any issues, I think this tablet would be fun for an artist. Because of the small size I wouldn’t want it to be my sole art tablet, but I think this is a good starter tablet or extra tablet, especially with a Bluetooth keyboard (any Bluetooth keyboard would work, not just the detachable one) so you could use it as a small, lightweight computer for art and general productivity.

The VivoTab is comparable to the Dell Venue 8 Pro, though artists may prefer the VivoTab’s Wacom tech.

Here’s an illustrator doing her thing on a VivoTab Note 8: