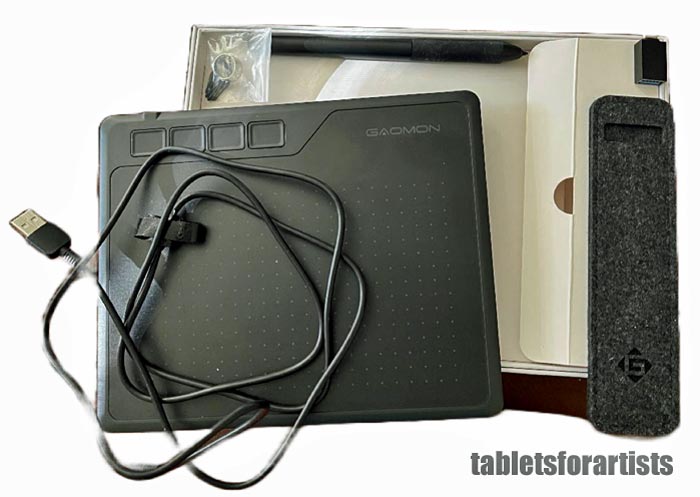 Wired, no wireless option. Need to connect to computer or Android phone/tablet.

This is the first Gaomon I have tried.  I received a complimentary unit for testing.

Gaomon is a Chinese company that has been in the digitizer space since 2011. In 2016, the company released the Gaomon S56K, and has since released more tablets, both with screens and opaque, non-screen ones.]

It’s light and easy to carry in a small bag.

Suitable for left-handed and right-handed use.

Opening up the box. 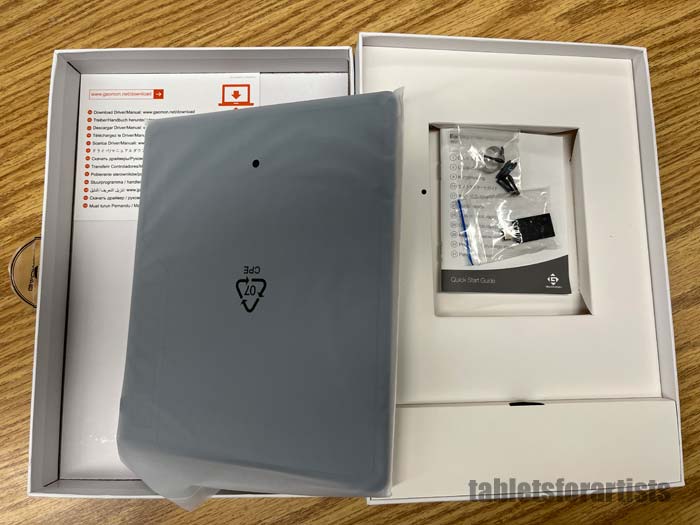 The Gaomon unboxed. The pen is in the compartment on bottom right.

The tablet came in a nice, minimalistic white branded box. The packaging is high-quality and the gray felt pen pouch is quite luxurious. There are 8 extra nibs plus one in the pen. 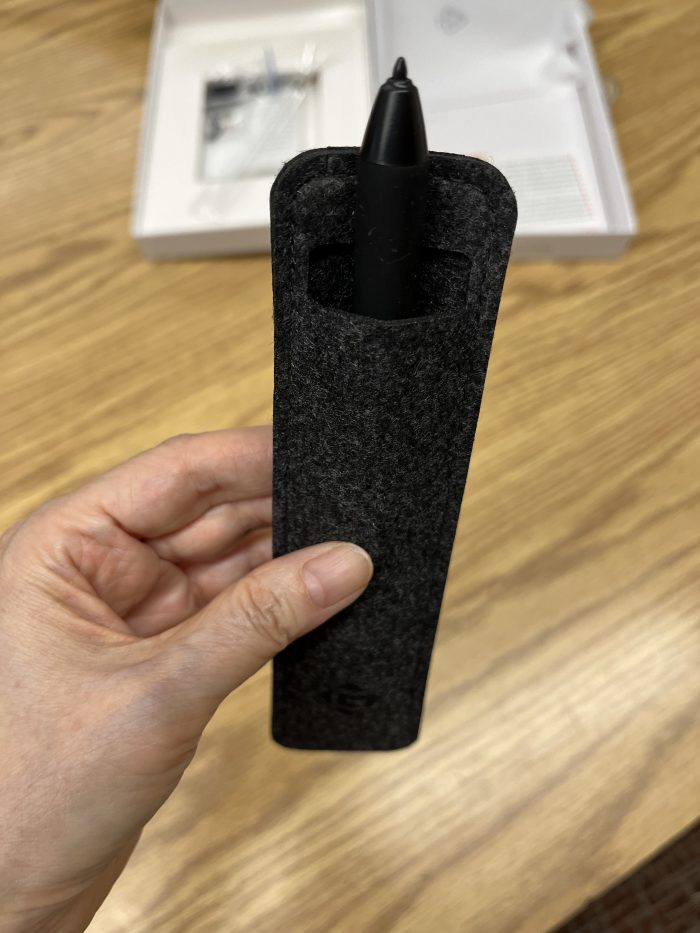 The Gaomon pen in its included felt pouch

The Gaomon is solidly built, not flimsy. It has a matte finish that’s not that bumpy. The bottom has four rubber anti-slip dots. The pen is about the size of a ballpoint pen and weighs 12 G or 3/8 oz. 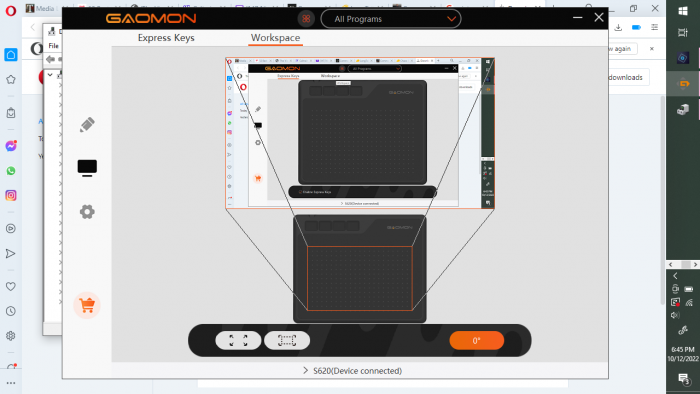 The driver installed smoothly onto both Mac and Windows. Oddly, with the Mac, a screen popped up saying the tablet wants to record my screen and it was asking me to click yes or no. This refers to playing back the drawing so you can watch each step. But the tablet doesn’t have that feature. So I clicked no. Later, I ended up reinstalling the driver after installing the latest Mac update to see if it made a difference, and I did not get that message.

De-install any previous tablet drivers you’ve added, including any Wacom drivers. In the Gaomon driver, you need to click “enable Windows Ink” get the pressure working in Windows.

The driver lets you customize the pen buttons and the four Express Keys and you can do this per app, which is nice. It doesn’t offer as many customization options as some tablets, but the basics are there. I felt the UI was a bit confusing but not that hard. If you want to make some customizations and shortcuts it’s enough.

The Artpaint AP32 pen weighs 13 grams. It’s not too heavy, not too light. It’s not slippery. The two buttons are easy to reach. The top half or so is covered with a comfortable-to-hold rubber sheath. It’s not a super-fancy pen, but it’s similar to most comparable tablets and has the nice feature of the soft grip.

As you can see, it’s plastic matte. 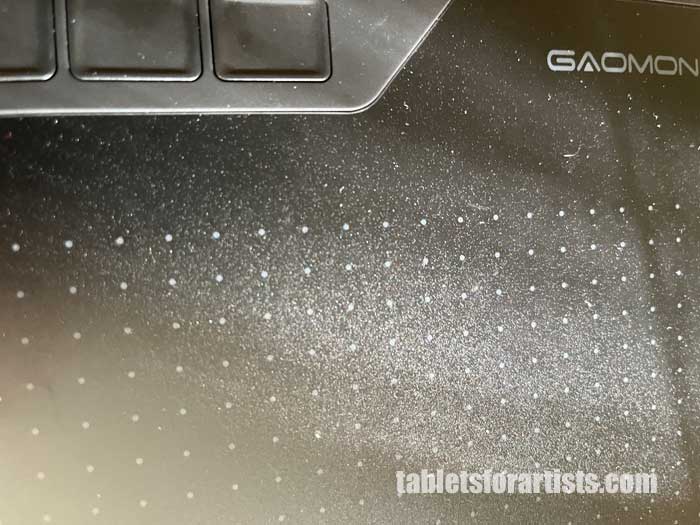 The high report rate and LPI, and number of pressure levels. are similar to the Wacom Intuos and make for a high-resolution line quality.

It has a slightly textured, matte surface that’s not too rough, but it’s good they included extra nibs as the nibs will wear down after time. There’s no rubbery-soft surface like on some tablets. I did not find that it caused slipperiness, and I like that it didn’t attract things like hand oil like the softer tablets do.

In the really compatible programs, drawing was a pleasure. There weren’t bumps, jumps, or anything like that, and the pressure and opacity sensitive worked smoothly. 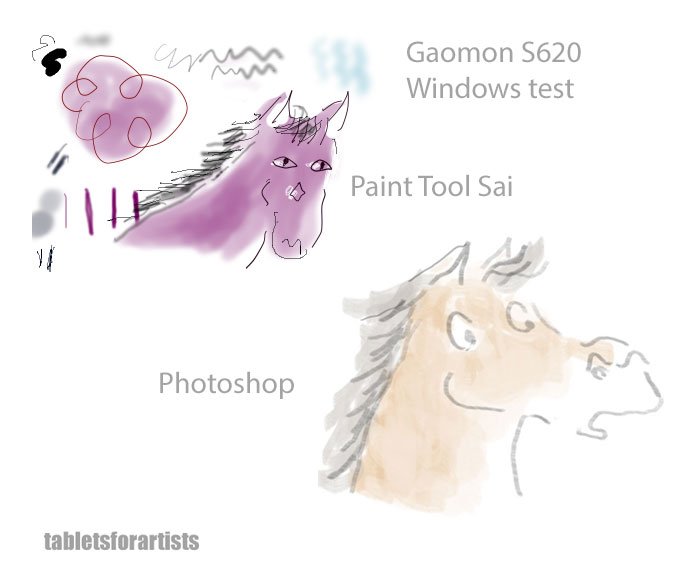 On Windows, the Gaomon performed great on almost everything, such as Photoshop, Krita, Sketchbook Pro, Inkscape, and Clip Studio Paint.  With Gimp, i could not get the pressure sensitivity working. For fun I tried some programs without the driver, and got pressure in Sketchbook Pro and Photoshop with no driver at all.

On Mac, I tested it on Photoshop, Krita, Inkscape, GIMP, Rebelle, and Clip Studio Paint. It worked great in Clip Studio Paint, and fine in Inkscape. In Photoshop, it was OK but a little laggy if I drew quickly. I wouldn’t recommend it with the others. This was my individual experience on Mac.

The company has a long list of programs they tested for compatibility. You can see it from the link below if you like. (PDF on this site)

I didn’t test it on Android–if I ever do. I will update this Gaomon S620 review. 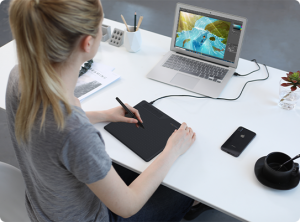 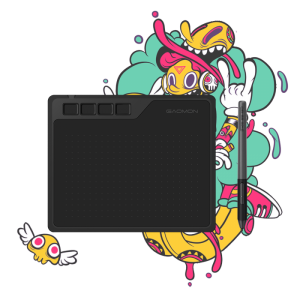 Pros: Good build quality. It doesn’t have a lot of bells and whistles, but that may make it a better value for those who don’t need those and won’t have to spend on them. It has as many pressure levels as a Wacom, and four Express Keys. It works on Window, Mac, and Android. So it’s a good deal for the dollar.

Cons: Didn’t work that great for me with Mac (with some exceptions), not a lot of customization options (though not everyone uses that many). No wireless option. No eraser tip on pen.

The size is pretty small; medium is a better size for professional art, and small is good for small drawings, photo editing, signatures, and having an extra tablet.

The Gaomon S620 is fine for a starter tablet to draw, do signatures, replace a mouse, play OSU, edit photos, and more. For me it worked better on Windows than Mac overall, but was fine in some programs on Mac. It’s built well and should last a while. The felt pen holder is a great accessory, and I like the rubber-grip pen a lot. It’s in the very affordable category at the moment so it’s something to consider.

See it at Amazon US

See it at Amazon UK

See it at Amazon Canada

S620 in the UK Gaomon store