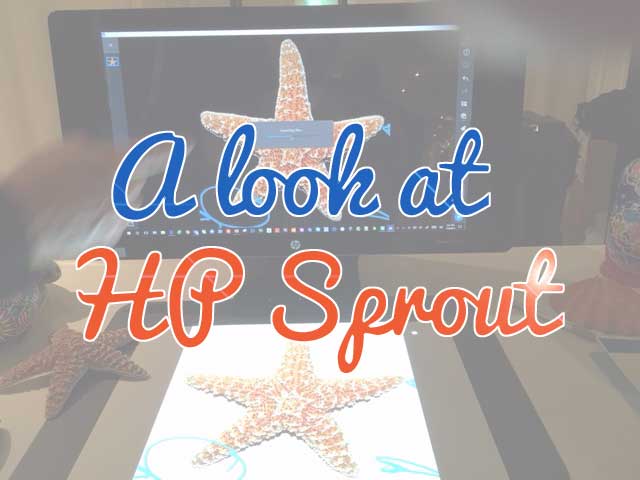 The first HP Sprout was launched two years ago (with Windows 8) after a development period of about 4 years. This article shows the HP Sprout Pro G2 in action. The non-Pro Sprout is quite affordable, at about the cost of a laptop. 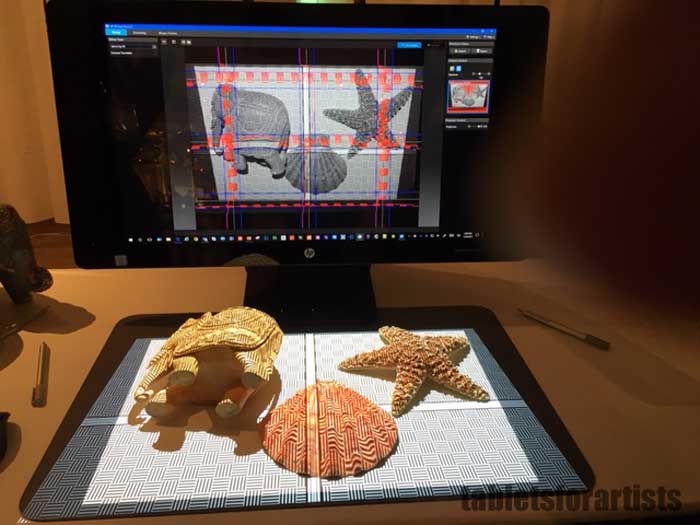 HP Sprout is a dual-screen PC that runs Windows 10 Pro. It’s meant to allow an immersive computing experience that breaks the boundaries between physical objects and the digital world.

It’s got an i7 processor, a camera/projector, an amazingly thin, flexible 20-point touch screen with 2,048 levels of pressure sensitivity (HP Active Pen included), and a scanner that scans both 2D and 3D objects.

Brad Short,  HP Distinguished Technologist and the inventor and creator of the HP Sprout, showed off the HP Sprout Pro G2 at CES Unveiled NY 2017. I was on hand to watch and try out the drawing touchpad.

Here’s the creator himself doing a demo of the Sprout Pro G2.

Drawing demo on the HP Sprout touchpad. The included pen gets 2,048 levels of pressure.

What can artists do with the HP Sprout?

What can we not do? Artists can draw on the touchpad, scan objects and immediately place them into a 2D or 3D image, create 2D and 3D art, edit music and video, and send files to a 3D printer such as a Dremel. We can incorporate blended reality, VR (virtual reality), and AR (augmented reality).

It’s not just for artists. Short says blended reality will soon be a common way of communicating. Instead of a photograph, people will take a 3D scan and post it on social media. The HP Sprout isn’t meant for super-heavy-duty 3D scans but to create something that looks nice and is manageable in many apps. Here, Brad Short demos creative uses for 3D scans, such as putting the images into a video or into PowerPoint 3D. (Microsoft Office now supports 3D).

The Sprout has real-time tracking of the object. You can move it around and it will capture.

The camera somehow ignores your hands and fingers, if you are holding up the object. If you’re holding it and you put down the object or otherwise let it lose tracking, it easily regains it.

At the end of the scan, you can see a mesh version with superimposed high-res photos of the surface. The files are .obj files you can open in surface mesh editing software, or AR and VR programs. The files are not very large at all.

You can also open the files in Photoshop and 3D Builder in Windows Creator. Short talks about how “fun” is an important part of Sprout ,and the idea of bringing 3D to everyone. “Sprout is a creative product for creativity,” he says. 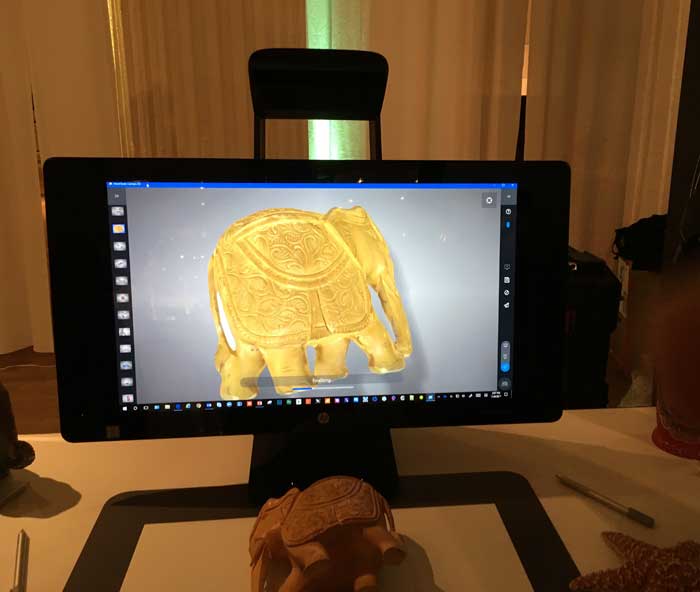 Accuracy: The 2d aspect is more accurate than the 3D in the camera used here; here, the 3D has 1mm accuracy. But if you use the the other 3D scanner that comes with the HP Sprout Pro G2, which is a higher-end, professional one, you get a high 10 to 15 micron accuracy.

You can then print it on a 3D printer such as a Dremel. You can also use it to create textures for your own 3D creations. You can quickly drag it to the touch mat and draw on it using the Active Pen or your finger on the touch mat.

Using it with Microsoft Creator Studio, you can integrate it into their videos or add your own 3D objects to libraries. You can edit music and video.

The HP Sprout is a tool, but also can be a fun a toy; a kid can use it.

The HP Sprout Pro G2 is a remarkable machine with a ton of potential. I find the flexible touchpad to be amazing.

The HP Sprout’s main use has been in the educational and manufacturing areas, but as it evolves, and consumers are more used to using 3D, AR, and VR, we could see more of these machines in homes. For artists who create game art, 3D models, or use AR and VR, it’s already extremely useful. Paired with Microsoft’s 3D tools, the Sprout may become a household word.

See the Amazon listing for more about the HP Sprout and HP Sprout Pro G2.