Huion H610Pro v2 review: a sequel worth the ticket 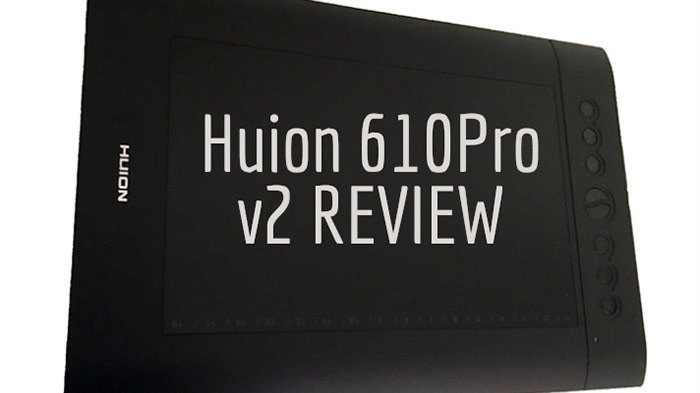 This Huion 610Pro v2 review (also called H610Pro v2) covers the second generation of the popular and affordable Huion 610Pro. There have been several versions in between, each one upping the functionality of the driver while the hardware stays the same.

Could the H610 Pro v2 finally deliver all the features you want at a truly affordable price? Well, this model boasts a battery-free, cordless pen that lets you fully customize the buttons, 8192 levels of pressure sensitivity, 24 express keys, and tilt/angle detection. It doesn’t have touch, but other than that it’s got all the most important features of the Intuos Pro (yes, the Intuos Pro, not the plain old Intuos). Scroll down for a more detailed comparison. I was able to test several art programs on Mac and PC on the Huion. To find out how that went, read on.

Graphics tablet, non-screen. You will need a Mac or PC (desktop or laptop) to connect it to. Works with Mac and Windows only.

8 External hotkeys and 16 softkeys, all customizable

The bezel adds about 2″ on each side of the active area.

What’s in the box? 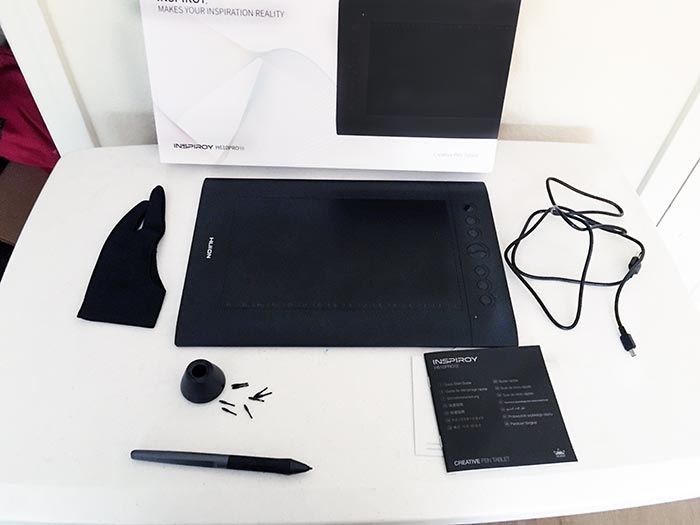 The Huion H610 Pro v2 and accessories. Photo by Tablets for Artists

Pen stand that includes 8 extra nibs inside (total 9 nibs, including the one that comes in the pen)

The pen stand can also be used to remove nibs

The tablet, which Gearbest sent me to write this H610Pro v2 review (click to see it there), came well packed in a sturdy and attractive printed box that says Inspiroy, which is the product line the tablet is part of. You don’t see the word Inspiroy a whole lot other than on the box.

It has 8,192 levels of pressure sensitivity, matching Wacom’s maximum levels. Not only that, but the v2 offers tilt/angle sensitivity and a cordless, battery-free pen. The old 610Pro had a corded pen.

Tilt sensitivity means that your drawn line will change according to the angle at which you draw at, making your line more natural-looking.

In the driver you can easily set up left-handed use.

At a lightweight 22 oz., it’s very portable and would fit into a largish backpack or briefcase. On a plane, it’s OK to bring it on board or place it in checked luggage. Leave the battery in the device.

The Huion is lightweight and made of black plastic, with a thickness of roughly over a half inch at the highest part. It has a curved design. It’s sturdy, nothing loose or rattling. It has 6 round hotkeys on the outside as well as a dial that has two hotkeys (the dial is not a touch ring). The dial has two curved buttons that also press easily. The bottom has four soft rubber feet that add very little height.

The softkeys are along the top of the active area (or the bottom, depending how you have the tablet set up). You can see the softkeys faintly on the tablet; they don’t light up when used. The press keys and softkeys both function the same as ways to use shortcuts such as backspace, option click etc. They are totally optional to use.

The buttons and dial are shiny and the rest of the tablet is matte. Fingerprints don’t stick to the active area too much.

The drawing surface is smooth but not slippery. It doesn’t have a toothed texture.

While it’s plastic, it’s still sturdy, so I won’t take any points off for that in this Huion 610Pro v2 review. 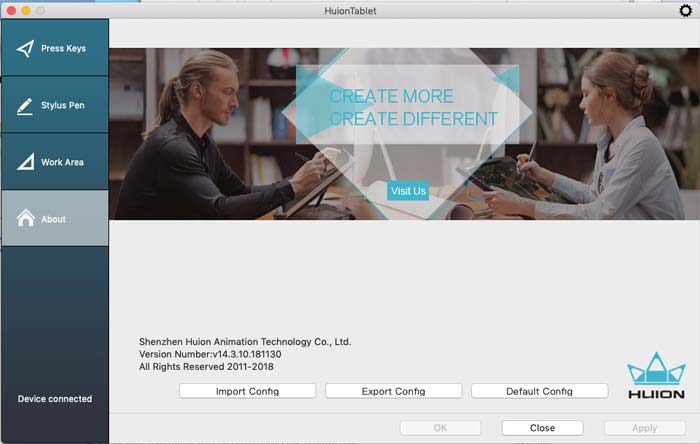 Installing the driver on both Mac and PC was easy as long as you follow the instructions and are ready with the Mac Mojave issue if you have Mojave.

You have to download the driver from the Huion site; there’s no included CD. There are two Huion sites, huion.com and huiontablet.com; either is fine.

You may or may not need to install the Huion driver under Administrator depending on your computer settings.

There’s no on or off switch. Once the tablet is connected via the mini-USB, the driver will show the words Device Connected. A green indicator light will go on when the pen touches the surface.

If you can’t install the driver on your Mac that has Mojave, you need to take some simple steps which are described on the Huion site here:

If you still have problems, sometimes with Macs you need to reset the USB ports. Here’s how: 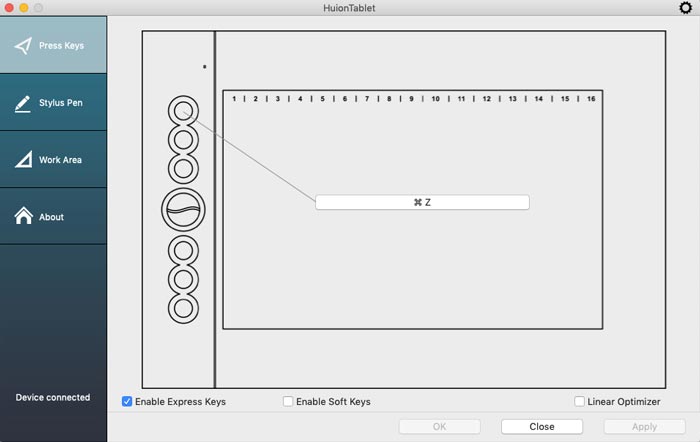 Driver panel to customize shortcut keys on the v2

You can configure the pressure curve, test pressure, and map the screen you want to use; change to a left-handed setup, and set up multi-monitor use in the driver.

The driver has preprogrammed functions for popular shortcuts but you can also customize them to whatever you want. You get a total of 24 customizable buttons, including 16 softkeys which are visible along the top (or bottom, depending how you have the tablet set up).

Unfortunately, the softkeys do not light up and are hard to see. They are there to speed up workflow and are completely optional to use. But if you rely on them, the low visibility could be annoying. You could do something like write them down on a piece of white tape and tape that to the surface if you’re up for a DIY solution.

Unlike with Wacom drivers, you can’t save different shortcuts to specific art programs.

In the driver you can also customize the pen buttons to do much more than just erase and undo, which is not common at all with affordable tablets. The pen has one button, which toggles. 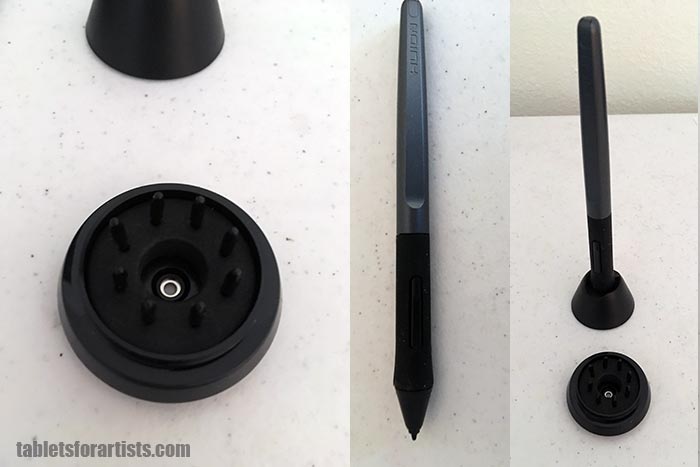 The pen is very lightweight at around a half ounce (14 grams) and feels hollow. Some may find it too light; you don’t get that feeling of balance and heft with a light pen. But it doesn’t add strain when drawing for hours. The pen has a tapered barrel. It does not take a battery nor need to be charged (the old Huion had a pen that had to be charged).

The pen stand is cleverly designed to hold 8 included extra nibs and the little hole is a nib remover. The stand is small and vertical and doesn’t take up much space.

To make this HuionH610 Pro v2 review complete, I tested it with several popular art programs on Mac and PC.

Photoshop, Sketchbook Pro, Clip Studio, and Krita worked beautifully. Krita is especially sensitive with little pressure needed to get a thick to thin line (that is using the default pressure setting). Fresh Paint, which is a Windows app, works fine.

Gimp and Sai worked great as long as Windows Ink is unchecked. I had trouble installing the latest Gimp on my PC and had to use an earlier version.

Remember that these programs have various settings that need to be enabled for tablets and pressure to work.

Note that you won’t be able to get pressure in Adobe Illustrator’s pressure-sensitive brushes; only Wacom offers that for now, so if you want pressure in vector, use Clip Studio, though file types that can be exported are limited.

Not as good: Krita and Gimp in their latest versions really don’t work that well on the latest on Mac Mojave. While the tablet worked with them, these programs are difficult to install and generally have issues on Mac. In Krita, I’d sometimes get a reading height issue where the pen would make lines without touching the tablet. Earlier versions may work better.

The H610 Pro v2 should work with other programs as well, including Corel Paint, Medibang, and ZBrush; I didn’t test those, but others have.

There were some hiccups at times, such as loss of connectivity, but simply quickly disconnecting then reconnecting the USB (either side of it) fixed this. At times the pen would take a moment to start producing a line. These seemed to happen more on the PC.

Drawing on the Huion H610Pro v2

Compared to Wacom there is a slight difference in feel; the Wacom feels more fluid, the Huion more springy.

Photoshop and Sketchbook are my go-to programs, so I was very pleased with the performance of the pen and tablet. There’s a smooth, blob-free widening of lines with pressure, no skips or jitter.

Huion offers a one-year guarantee. They respond to emails (on the Chinese time zone, so it’s at night if you’re in the U.S.) and also can be contacted on Skype and phone; the info is on their sites. They also answer questions in several places online. There are also discussions and forums around the Web to seek answers, and I’ve posted some hopefully helpful tips in this v2 review.

Huion 610Pro v2 reviews by users are mostly positive from what I’ve seen. The chargeless pen is a big improvement over the 610Pro, and the drivers seem easier to install. Many are lauding the tablet’s affordability and comparable functions to the Wacom Intuos Pro.

The Huion has no multitouch so you can’t use touch functions or finger paint. You don’t get bundled art programs, nor are there different types of pen nibs or pens. The Huion pen doesn’t have an eraser end. There’s no wireless option.

There are also no accessories that Wacom offers that are sold separately, such as texture sheets and the Paper Clip, which lets you attach paper (though you can go ahead and put paper on top of the Huion). The Huion doesn’t have a touch ring; the dial on the Huion is more part of the design, housing two Express Keys.

There’s no on-screen radial menu (instead, there are the softkeys). You also can’t save customized driver settings to specific art programs.

The Huion exterior is all plastic with no metal parts. and the Intuos Pro uses some anodized aluminum.

The Intuos, which is the entry level non-Pro Wacom drawing tablet, has 4096 levels and no touch or tilt. So the 610Pro v2 has more in common with the Intuos Pro, though has the lack of touch in common with the non-pro Intuos. The drawing surface on the Huion is smoother than either kind of Intuos.

Difficult to see the softkeys

No Wacom type of accessories such as different types of nibs, texture sheets, or Paper Clip

Not a lot of documentation

Driver compatibility: what’s with all those Huion 610s?

Some Huion drivers are cross-compatible. If you’ve got the Huion610Pro (8192) that’s not the v2, you can use this v2 driver on that one but not on the earlier ones. Here’s some info:

This really is a bargain and a BIG step forward in the affordable drawing tablet category, so this Huion610 Pro v2 review is a thumb’s up. I had fewer driver problems than I’ve had with some of the others, and the battery-free, cordless pen is a major improvement.

There were a few minor glitches, but for the price, this gives you the creative power of the Wacom Intuos Pro. The generous size is great for drawing, not too small or too big. It’s easy to fit in a medium-sized backpack or bag and is lightweight. Ideal for artists, photographers, students, and OSU players, the v2 could be a starter graphics tablet, an extra, or your sole drawing tablet.

See it on Gearbest