With this ring, 32 magnometers, 20 patents, a Magic Slate, and an app, pixels and pencils finally make a commitment.

Five years ago in Grenoble, France, now the headquarters of iskn, French user-interface specialists Timothee Jobert and Jean-Luc Vallejo decided to make the analogue world a better place by improving interaction with the digital world. Their vision was to make that most human of implements, the pen, capable of opening the technological portal. Teaming up with Tristan Hautson, an engineer, they came up with a magnetic ring that functioned as a digitizer collar for pens, pencils, and markers. Fast forward, and the company iskn was born. 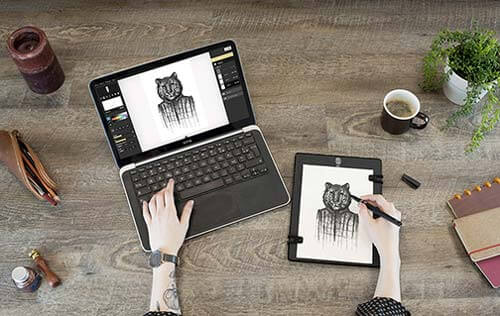 iskn has now issued the Slate, exhibited at IFA 2016, a large consumer-electronics show in Berlin. The Slate is plastic surface with a digitizer layer sandwiched in that lets you draw with your own art supplies and digitize your markings.

At 14 oz. and about the size of a sheet of paper you can carry the Slate around in your bag, just like your trusty old paper sketchbook. Unlike your sketchbook, the Slate development involved 20 patents.

One Ring to rule them all

You can’t use absolutely any writing implement, there are some limitations, but the list is long and there shouldn’t be any problems finding writing utensils that work. The diameter that the Ring will fit goes up to .33″ or 8.4 mm. A regular pencil is 6 mm. You help the Ring stay in place via stoppers.

This is not anything like Lenovo’s AnyPen, which does away with the pen itself. Rather, this turns your old-fashioned pen or pencil into an active pen.

Note: The Ring does not pick up the color of your tool, only the texture. So if you’re coloring a green apple on your page, you’d select green in the art app to get green on the screen.

You can also buy The Pen, which has the Ring built-in, and offers two tips: square, like the traditional Conte crayon, and round like a regular pen.

A 32-magnometer digitizer in the Slate tracks the Ring-wearing writing implement’s motions in space, including tilt angle, giving natural tilt sensitivity to your linework. You can use letter-sized paper on it, leaving a margin around the Slate’s 5¾” x 8¼” active area.

If you use your own implement with Ring on the Slate in standalone mode, meaning without a device such as the iPad, the line will default to the built-in black ballpoint pen line and you won’t get your tool’s own texture.

The pen interacts with an app called Imagink. The app is an art app, giving you a variety of pens, art tools, and palettes. You can easily share your images, or upload your work to the Adobe Creative Cloud. Images appears immediately on your screen. It lets you use four layers. The company says it’s working on adding 3D. You can download and use Imagink without the Slate or Ring.

Speed and tilt sensitivity, plus real implements (even the iskn Pen has no batteries or electronics inside, just the Ring already built in), bring the drawing experience closer to involving all the senses. (One thing I really do miss about traditional art is the smell of all those art supplies–wood shavings, paint, crayons–they have a stimulating effect on creativity the way coffee does on getting thoughts going).

Digitizing from paper is familiar from the Bamboo Slate, syncing Boogie Boards, and other e-paper, but those require a special pen rather than just a ring.

The advantage of using your own implements is the variety of tips, and the verisimilitude–a digital 4B pencil that comes straight from the real thing will be closer to the real thing than a brush made to look like a 4B pencil, even if that originally came from a digitized real 4B pencil, because a brush is a repeated image.

The Ring is quite inexpensive. Snazzy clips are also available to protect your art from dropping onto the real floor.

Video: How to use the Slate

Remember: keep metal objects 10″ away from the Slate and your iPad at least 2″ away.

You can also use the Slate alone, using its memory to store your images or notes, then later transfer your work to your device.

The Lenovo Yoga Book for fall 2016 operates on a similar idea, building the digitizer right into the computer, but you need a digitizer pen for that. The transformative Ring keeps iskn’s creation unique.

There’s not real pressure sensitivity in the Slate, though the company is working on this.

The accuracy of the image on the screen is not always 100%; it takes practice.

Like quite a few other art apps, Imagink has a replay function so you can replay your strokes.

Update: A Slate update allows the Slate to export files to both PSD and SVG instead of being usable only in the native app. It also fixes some issues with hover and accuracy.

The Ring is a bit similar to artist/inventor’s Giulio da Vita’s iLapis.

“We are at the dawn of a paradigm shift, where the border between the digital world and the physical/material world is opening up and allowing for simple, creative interaction between the two worlds!” — Jean-Luc Vallejo, CEO of iskn

13 thoughts on “iskn’s Slate 2 puts a ring on it, transform pencils to digitizers”