Windows 8.1 (64-bit), with free upgrade to Windows 10 when that becomes available

takes microSD cards of up to 18 GB

Tablet, charger (only works with the Surface 3), documentation, Quickstart guide

Microsoft touts the Surface 3 as being a rival to the iPad, because of its light weight, 3:2 aspect ratio, and comparable price; as a potential laptop replacement, it does much more than an iPad. It certainly could take the place of an iPad in terms of what it does, and it does far more than the iPad; if all you need is the functions of an iPad, then you may be happier with one. I see the S3 as a lower-cost rival to the more premium Surface Pro 3 because the S3 has almost the same features, including pressure sensitivity. So this Microsoft Surface Pro review will focus on the comparison with the SP3 rather than an iPad, because many artists are simply looking for an affordable drawing tablet with a screen and stylus and pressure sensitivity.

It’s far better than the now-discontinued Surface RT line, which had no pressure sensitivity and an irritating operating system.  If you want something that can also act as a laptop and art tablet, the Surface 3 is good deal. It has apps such as Netflix and iTunes, or you can use your browser to watch Netflix and you can run desktop iTunes.

This is the first computer to run the Intel Quadcore Atom X7, which as as powerful as an i3. You can run any Windows 8.1 program on the Surface 3. The X7 is made to run cool. It will handle Photoshop well.

The 3:2 aspect ratio is that of a sheet of paper. The Surface and Surface Pros 1 and 2, Samsung Ativ, and some other Windows slates have a wide screen. The 3:2 feels more natural hold and to draw on, and fits drawings such as comics better. It’s the same aspect ratio as the Surface Pro 3.

The SP kickstand takes only 3 positions, making it less flexible than the SP3, but also adding less weight and cost.

Storage options are 64 and 128GB, the 128GB is definitely better for art, since art programs and files can take up so much memory, and Windows also takes a lot of memory.

The S3 has an optional detachable keyboard with buttons.

You can actually set left or right-handedness by swiping from the right of the screen and writing the word “hand” (without quotation marks) in Search. A result will pop up asking you to specify the hand you write with, so you tap or click.

The N-trig 3 is good for drawing, though you do have to press harder, exerting a higher initial activation force to get a line and the line can be a bit skippy if you don’t maintain the force. It’s something you can get used to There is no line jagging around the edges of the tablet as there are with Wacom digitizers. Microsoft consulted with some digital artists when creating the N-trig interface. Some people don’t like drawing on the N-trig, and others do. It’s good to test it out in person before committing. If you want a similar computer with a Wacom digitizer, which some prefer as it feels a bit smoother, you can still get a Surface Pro 2 or Surface Pro 1. 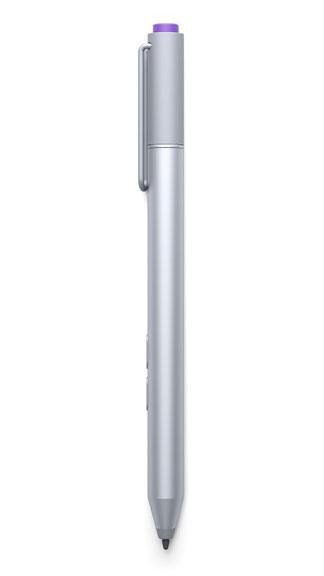 The Surface Pen is solid and metal, and handles nicely. It takes a single AAA battery. You will have to pair the pen to the tablet via Bluetooth when you first get it, but only once. You can pair it automatically at setup, or do it manually later.

The pen resembles a metal ballpoint pen and produces a fine line. The barrel comes in 4 colors. It works with art programs in addition to apps that support Microsoft’s Ink, such as Word, PowerPoint, and OneNote.

The pen has three buttons. The top button connects to the SP3 via Bluetooth. Single-clicking the top button will open OneNote, and double-clicking will take a screenshot.

On the barrel are two more buttons. The one farther from the tip is the Right-Click button. That one can open a pen menu where you can choose an ink color for OneNote, or select text.

The button nearest the tip is the eraser button.

Drawing on the Surface 3

The screen is responsive and nice to draw on. When drawing, you don’t get jitter around the edges as happens with Wacom devices. However, there is a different problem specific to N-trig, which is that when drawing a diagonal line slowly, you get a jagged line. This is because the N-trig digitizer is arranged on a grid. Microsoft is aware of this problem and attempted to make the pen connection more powerful in the 3, but the problem continues. In testing the N-trig, I got this problem some of the time, depending on what strokes I was drawing. Here are some possible fixes:

-Draw a straight line, select the line, and rotate it.

-Use Manga Studio, which has line smoothing and fixes the issue.

-Use Lazy Nezumi, an app that gives you line smoothing. It has a Photoshop plugin, or you can do it canvas by canvas in other programs. It has a 30-day free trial, and is fairly affordable to buy.

-The Surface Pro or Surface Pro 2 have Wacom digitizers so would not have the jagged line issue (but do have edge jitter).

Mostly very positive, with some complaints of defective tablets. One Microsoft Surface 3 review described it as being great for students, while another praised it for business and giving client presentations. As an artist, you could show your portfolio on it. So it’s a good all-in-one. As a tablet it’s very portable, and adding a keyboard gives you a functioning laptop.

The Surface 3 is arguably the best art tablet with screen that you can get for this price. You will not be able to get tilt sensitivity the way you can on the more expensive Wacom Intuos and Cintiq. There is not a variety of pens available as there is with Wacom devices. Professional artists who use Adobe CC and a lot of memory would do better to get a Surface Pro with its more powerful processor.

With the Surface 3, you will have pressure sensitivity, a desirable aspect ratio, lots of computing power (not quite as much as with the Surface Pro 3) and the ability to do anything a Windows laptop can do. You can run Metro Apps such as Fresh Paint and the Sketchbook Express app, or full Adobe programs and full Sketchbook Pro or Manga Studio, games, and Word. It seems that pressure sensitivity is becoming much more common in tablets. As for the diagonal-line problem, not everyone seems to have it, but if you do, try one of the solutions above. This is an annoying problem and may turn you off of the Surface 3 as an art tablet.

When preparing this Microsoft Surface 3 review post, I expected to make more of a comparison to an iPad, but in studying the specs, that comparison doesn’t quite make sense. As far as a buying choice, though, you are getting more for your money as an art tablet and a computer than with an iPad, but that doesn’t take away from what the iPad does offer, which is the Mac OS and breezy design. The Surface 3 has a nice design too.

Because the screen is not quite as large and the processor not quite as powerful, we still favor the Surface Pro line for professional digital artists, but if you’re on a budget, you can be very productive with the Surface 3. It’s not limited to use as a digital sketchbook; it goes beyond that. It’s also a good general-use device.

see it on Amazon

Want to learn more about the different types of art tablets? Read our introductory article.