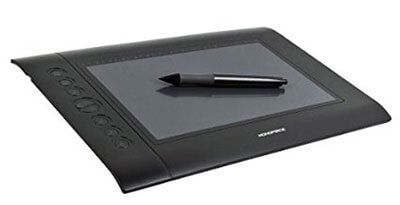 The Monoprice Tablet is a graphics tablet. It attaches to a computer via USB 2.0. You draw on the tablet and see your art on the computer screen. This review is of the 10 x 6.25″ model.

The Monoprice tablet offers many features a Wacom does but is much more affordable, making it good for beginners and students ,and artists on a budget. Its stylus requires a single AAA battery (included).

Monoprice graphics tablets do not have a touch function, nor do they have the capacity to sense tilt and rotation like the high-end Wacom tablets do. While these features can be useful, not every artist uses them, and only some Wacom pens and tablets have these features.

The Monoprice tablet has the same high, 2,048 levels of pressure sensitivity as the newer Wacoms and other premium tablets.

The Monoprice isn’t shoddy, but, unsurprisingly, it’s not as solidly built as the most high-end graphics tablets. Still, with normal use, it won’t fall apart on you.

WHAT’S IN THE BOX

There are 6 buttons go along the left. The latest set of Windows drivers (v 9.0 driver) allows you to flip the tablet to move them to the right.

Note: The newest set of drivers for Windows (v. 9.0, linked below) features the ability to flip the tablet so that the Express Keys are on the right side.

You may download the drivers as well as user Manuals from this page on the Monopricesite.

The drivers are for Windows XP and later, and Mac 10.4 and later.

The tablet is Linux-capable but doesn’t offer Linux drivers.

2,048 levels of pressure sensitivity
drawing area of 10 x 6.25 with a widescreen aspect ration of 16:10
6 programmable express keys on the left
16 preset hotkeys along the top
4000 LPI resolution
200 RPS report rate (determines how often information is sent to the tablet)

Note: the Amazon listing for this mistakenly calls it the 8 x 5″ model, but the specs other than the size are accurate for the 10 x 6.25.”

The stylus is a little flimsy and it’s worth it to buy the better one. Users trying to insert a new battery often had trouble getting the battery lead to make contact with the battery. The AAA battery that comes with the pen is not always fresh, so you may need to replace it right away.

TIPS: When inserting a new the battery, be careful that the battery and contact area in the pen barrel are matching correctly, and do not bend the metal strip inside the pen. To open the pen that comes with the tablet, pull the pen apart.

As a replacement pen, many users recommended buying this Monoprice pen, which is very affordable. 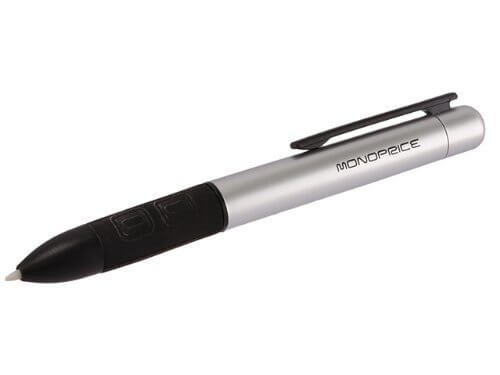 It’s lighter weight and thinner than the one that comes with the tablet. This pen unscrews. The build is sturdier and the battery replacement is less hairy, though the innards are still not as sturdy as they should be. A fairly comment complaint problems when screwing or unscrewing the two pieces to put in or take out a battery. Also, the buttons are a bit hard to find.

Both pens have programmable buttons. Neither has an eraser tip. To erase, use your art program’s eraser tool.

The nibs for these pens may wear down quickly, depending how hard you press. The plastic sheet over the tablet protects the nibs some, but you may prefer lifting the sheet when drawing, exposing the tablet’s textured surface, which wears down the nibs faster. You can purchase inexpensive Monoprice replacement nibs that will fit both. They come 10 to a pack.

The surface has a slightly bumpy texture which gives you a nice bite while drawing, but as mentioned above, it can wear down nibs. It also comes with an attached plastic sheet over it to make tracing art easier. Tracing drawings is one way to get your drawings into your computer. Other ways are using a scanner or digital camera, or, of course, drawing freehand right onto the tablet.

When using the Monoprice tablet, you have to tap the pen on the tablet to wake it. If the pen is set to a brush tool, you will have to hit “undo” or use the eraser in your art program to get rid of the mark the pen has made on the tablet when waking it up.

The tablet attaches to the computer via USB 2.0. When attached, it’s on; there is no on/off switch for the tablet.

You can use just about any art software that’s on your computer with this. You won’t necessarily be able to use it on every other program as a mouse.

The Monoprice uses some UC-Logic components. The drivers can be found on the UC Logic site. They are also included on a CD in the package. Installing them from the UC Logic Web site instead of the CD will ensure that you have the latest drivers.

There is both a live chat option and a place to post messages on Monoprice.com site. Customer support is responsive and offers replacements when people cannot get the tablet or pen to work. I did a chat with them to ask some questions, and found them to be helpful and polite.

Many digital artists, from hobbyists to professionals, loved this tablet. More than one Monoprice tablet review stated that the Monoprice was as good as any of the more expensive graphics tablets, including the Wacom Intuos. Some found the accuracy to exceed the Cintiq. This Monoprice has 2,048 levels of pressure sensitivity, which is the maximum currently available, though authorities over at Microsoft say that the number of levels past 256 is not perceptible.

The Monoprice tablet received many 5-star reviews. But there was a fair amount of problems mentioned by Amazon reviewers, resulting in over 10% of the reviewers rating it one star, mostly out of frustration with the drivers. This could be from conflicts with previously installed drivers or services that are running. Also, the instructions are not written in clear English.

Some wrote in their Monoprice tablet review that even after working with customer support, they were still unable to get the device to work. This was not the norm, and if you get it on Amazon you can take advantage of their good return policy. (Not that you want to go through a frustrating experience, but you have probably an 80% of higher chance of having a good or great experience with this tablet).

Some like the larger size, but others find it makes scrolling difficult, as you have to move your arm while drawing.

Stylus sometimes has problems with battery compartment
Drivers can be difficult to install
The button icons won’t necessarily correspond to how you program them, which can cause confusion.
The decals that act as labels next to the buttons are not removable.

The highlight of the Monoprice tablet is the most important thing: its performance. Some digital artists feel it’s better than any other tablet. The tablet is sensitive and responsive, and you can get very fine line control even when zoomed out. Adjusting settings in each art program, when possible, can make a difference. Each artist is different and will have different preferences. Some professional artists would want the tilt and rotation features offered by the higher-end Wacom models, but those features aren’t important to everyone. And, you might just want an extra tablet that’s less expensive to travel with, so if it gets lost with your luggage it’s not such a big hit to your wallet.

Considering the price, the Monoprice really can’t be beat. If you’re just getting into digital art, this is a great starter tablet. It’s also a great backup or extra tablet.

Monoprice also makes a tablet monitor, where you draw on the screen, that has been well-received. 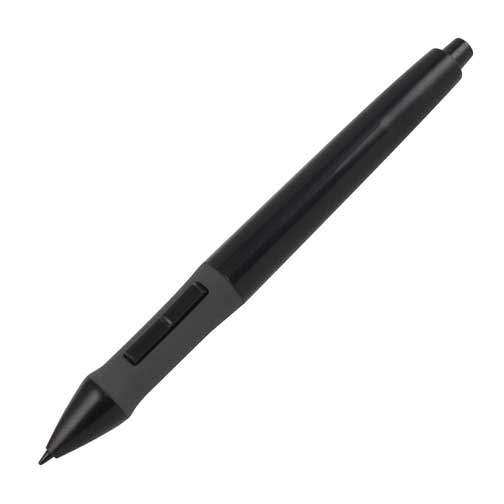 Monoprice makes their tablets in quite a few sizes. If you want a larger tablet, try the 12×9.

Monoprice offers good tablets for the money. They don’t have all the bells and whistles, but they are valuable digital art tools. 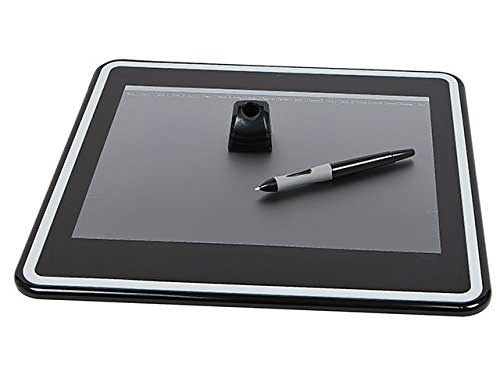 The Monoprice 12×9″ tablet gives you lots of space.

For more on budget tablets, read our Huion tablet review.

See our article about choosing the best Wacom Intuos tablet.