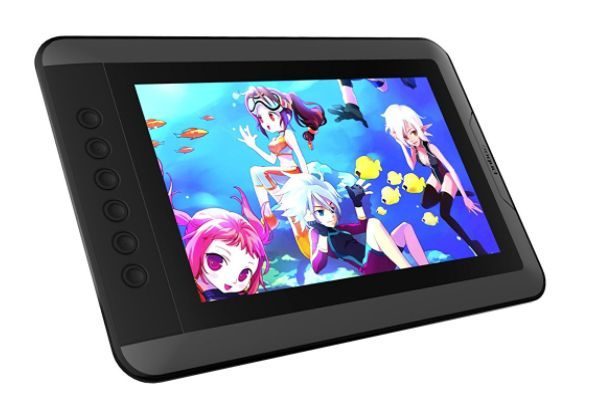 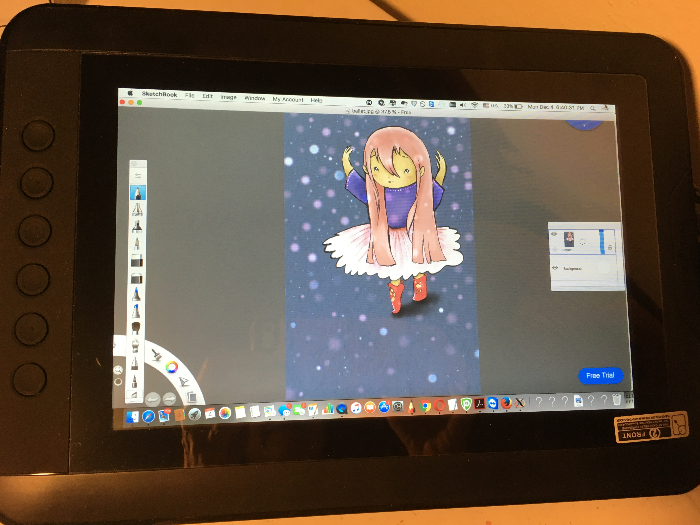 You have to attach it to a computer.

What’s in the box?

The PNBOO comes in an attractive white box with graphics. (Unlike some budget ones that come in plain cardboard). You can see the box at the bottom of this page where it says unboxing video (you don’t have to watch the video to see it). 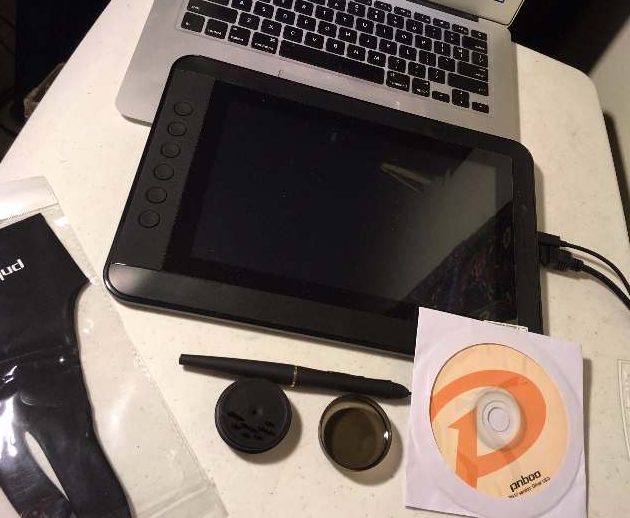 Like other budget graphics monitors, it has no multitouch (can’t finger paint on it), no tilt sensitivity, and no pressure sensitivity in Illustrator. Palm rejection is not an issue since it doesn’t have multitouch.

I recently reviewed the PNBOO PN2150, a 21″ tablet monitor. The PN10 is around a couple hundred bucks at this writing. 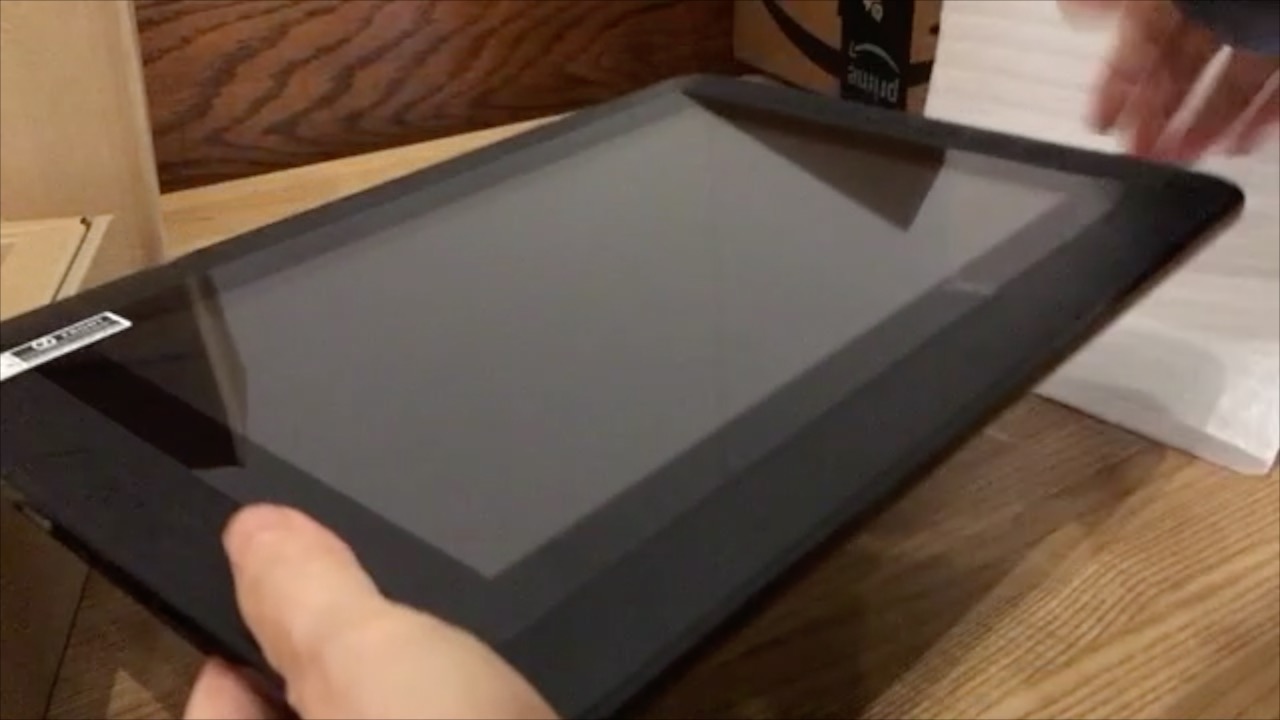 The build quality is nice. The PNBOO is really lightweight, lighter than an iPad Pro. It’s made of plastic and pretty solid, with two rubber grips along the back so you can grab it easily. There’s a raised bezel around the screen. Unlike most budget drawing monitors, there are six Express Keys that are programmable in the driver. The driver has presets to some popular drawing programs.

You can use any art software with it, including Photoshop, Sketchbook, Gimp, Blender, Illustrator and more. It gets pressure sensitivity (not in Illustrator or Inkscape though–for pressure in vector, use Manga Studio). You can’t finger paint on it, though, you have to use a stylus.

On a Mac, you will need a MiniDisplayPort to HDMI adapter.

There’s no need to plug the PNBOO PN10 tablet into a wall, which gives it a lot more mobility. I was easily able to sit on the couch and draw, and at the desk, it doesn’t take up much space.

The best thing about it (besides the price) is how light it is. The pen is very light, too. It’s thin, more like a ballpoint pen. It’s similar (perhaps the same) as the pen that comes with the ArtisulD13. The driver says Artisul, so there’s some connection there.

The pen has a more premium quality than the thick pens that come with most budget tablets. It has a chrome band at the place you can unscrew and open the two sides (though there’s no good reason to open it). The pen doesn’t need a battery or charging.

The pen is accurate, without much parallax. I did recalibrate it, but it was fine out of the box. The plastic on the screen is pretty thin so there’s not a lot of distance between the surface and the digitizer layer, thus, not much parallax. It’s not possible to have zero.

Driver installation was simple. I used the site to get the driver, rather than the included CD, since my computers lack a CD drive. It’s always better to use downloaded ones anyway, because they are kept updated.

The driver says Artisul, and as mentioned, it has shortcuts for the express keys and pen buttons. More on the driver later. 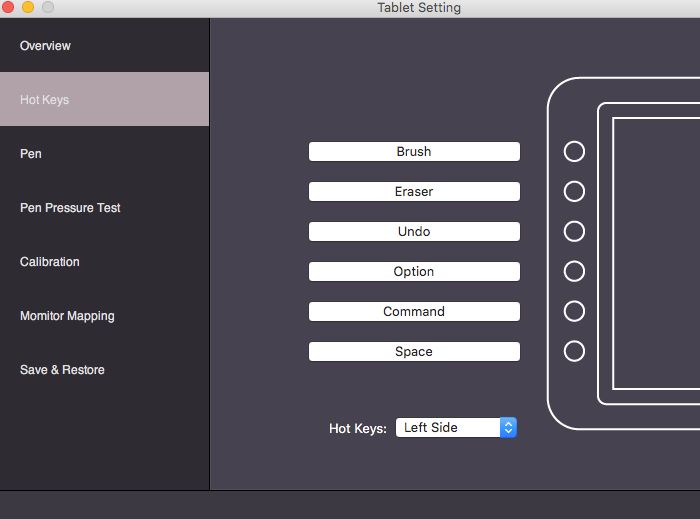 The drawing surface is plastic. It’s not too slippery. It’s a lot less slippery than the iPad Pro. In fact, when home, I find myself using this instead of the iPad Pro, which surprised me. I like that I can use desktop programs, that it’s not too slippery, and that it feels like a dedicated drawing surface rather than something that invariably distracts me with all the online temptations (even though I can on those on the tablet screen, the icons are so small on it that it’s less tempting.

Colors on the IPS LED screen are rich and bright, with deep blacks.

The pen is thinner than most budget pens. It’s like the Artisul D13’s pen.

Drawing on the PNBOO PN10 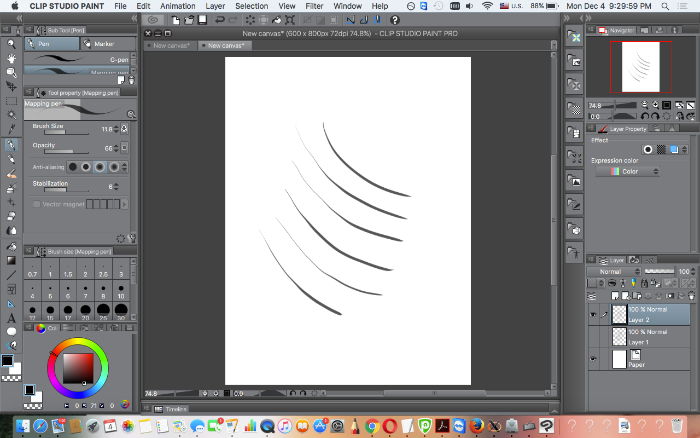 At first the driver was fine but then it started to behave inconsistently. I deleted, then reinstalled it, and since then it has been fine. Pressure sensitivity works well and there’s good pen accuracy. You have to press a little bit but it’s fine.

I also tried the Artisul D13 driver from the Artisul site (Artisul.com) and that one worked well, so if you have any driver issues, or just want to compare, try that one.

I’d recommend the PNBOO PN10 for people who want something small, light, and cheap, who want to use desktop programs as opposed to apps. The PNBOO could be a good travel pick if you are working on a larger Cintiq type of tablet but can’t bring it with you. It also could be good for a starter tablet for a student. The size makes it more like a sketchbook.

Here’s a quick pen test from the outside of the tablet: