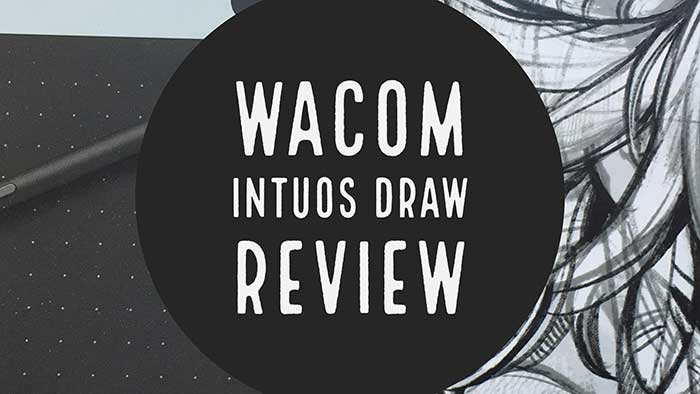 The Wacom Intuos Draw is the most basic of the Intuos graphics tablets line and the only Intuos that does not have multitouch capability. That means you can only use the pen on it; you won’t be able to use hand gestures such as pinch or zoom. This Wacom Intuos Draw review is of the Small size, the only size it comes in.

The Draw not as basic as Wacom’s Bamboo signature pads, which don’t have a lot of art features. It’s the simplest of their graphics tablets.

This makes it a good drawing tablet for beginners who might not need multitouch, and want something affordable. If you just prefer or require a straightforward graphics tablet that has Wacom quality without much learning curve, the Intuos Draw might be for you. 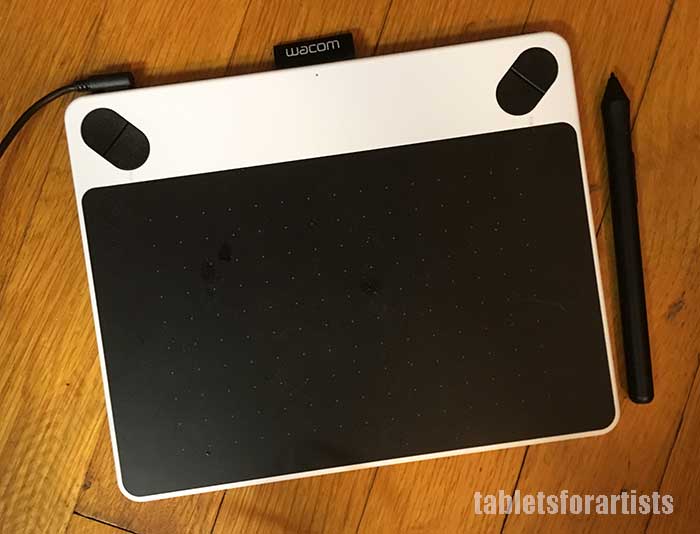 Inside the outer sleeve is a high-quality, nonflimsy black cardboard box that offers solid protection for shipping.

The art software that’s included has to be downloaded. 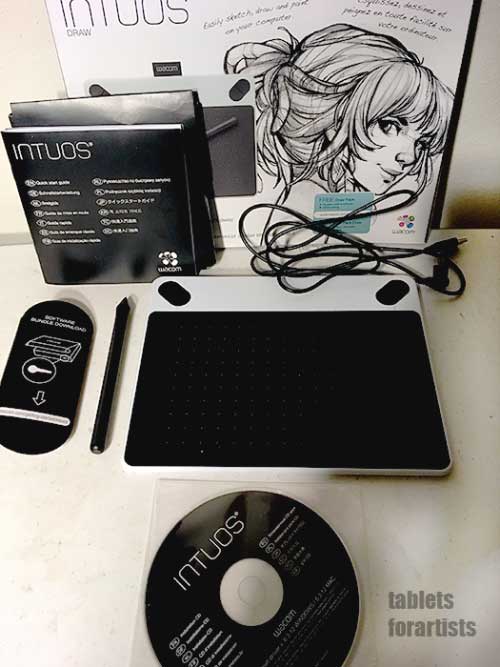 Intuos Draw and what it comes with: pen, CD, USB cord, documentation

You can use the CD, which has the driver, if you have a CD drive, or you can download the driver from Wacom. I always prefer to download regardless, in case there has been an update. 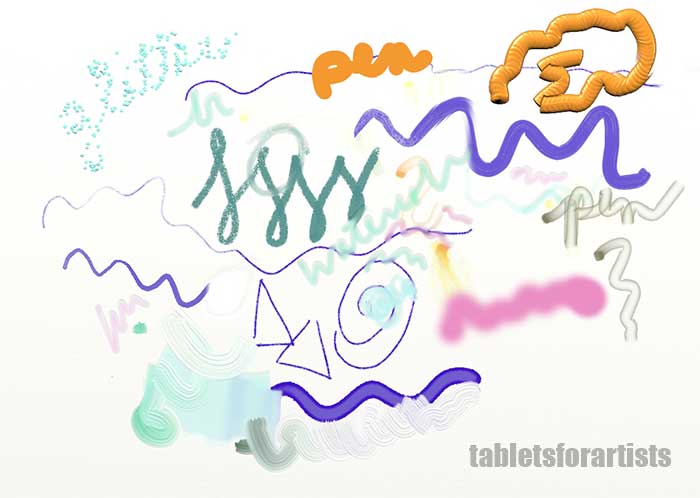 The Draw will work with any art program, including Photoshop and all Adobe software, and gets pressure sensitivity in Adobe Illustrator. It’s fine for Mac and Windows. Wacom includes some free art software with all its tablets, a different program depending on the model. The current offering, which I did these doodles in, is ArtRage Lite.

The Intuos package includes a code to type in to get the free art software and other offers from the Wacom site. In addition to ArtRage Lite, an offer for 30-day subscription to Lynda.com software courses, and an offer for a free photo print on metal. Wacom also offers access to online art tutorials on its own site.

The offers change from time to time, so check when you buy the tablet. Though there are free art programs you can get online, I really enjoy ArtRage, which has a lot of fun brushes and effects, some of which you can see in the above doodles. These include glitter, oil, pastel, palette knife, and roller. It’s a really easy and intuitive program, and is inexpensive to buy the full version from ArtRage (they have a free demo version, too).

These perks are a good incentive to stick with Wacom, especially with their entry-level drawing tablets such as this. 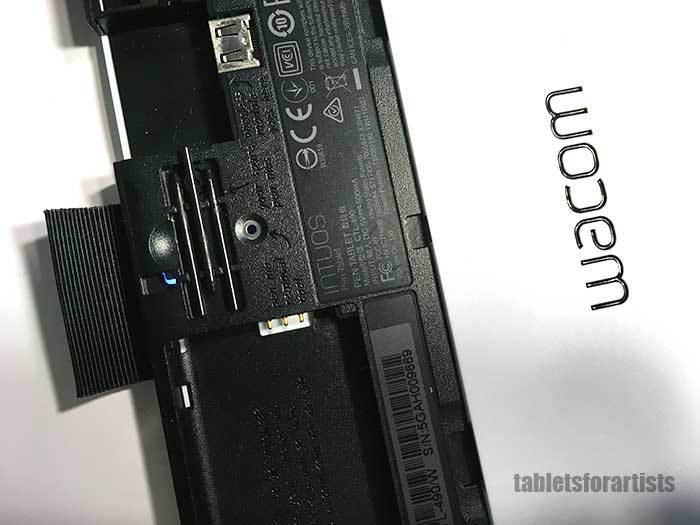 Clever place to store the extra nibs, eh? And the thing on the left is a pen loop.

The back compartment stores the extra nibs. Below the nibs, that little circle is the nib remover where you insert the pen with nib and it pulls it out painlessly. The two compartments around the nibs are for the optional Wi-fi kit parts.

The micro-USB fits snugly and securely into the tablet’s side.

On the upper right corner of the tablet is a small security lock slot for a Kensington lock or pen tether. It’s marked with a small lock icon. The tablet top has a neat little canvas pen loop you can put your pen in. The loop fits snugly and you have to put the pen in starting with the pen’s back end.

The small dots on the surface show the active area, which is mappable, meaning you can use just part of it if you want. Mapping is useful if you want to work without moving your hand a lot. Using just a small part of the tablet, a small movement will go a long way. You set the mapping function in the driver.

Though the Intuos Draw looks almost toylike, it’s not a toy. It’s fairly well built for something so light, though I wouldn’t want to drop it hard, because the outer case doesn’t seem super protective. I found myself gently handling the detachable pieces such as the back cover.

The tablet has lots of good Wacom features, such as getting pressure sensitivity in Adobe Illustrator, and it’s got good old Wacom EMR, the most sensitive type of Wacom digitizer.

If you’ve got a multiple monitor setup, the Intuos Draw might be too small to effectively cover all the pixels needed. Otherwise, it should work on most setups, even with a large monitor.

The pen has two programmable buttons that you can program for just as many things as you can the Express Keys. It has no eraser tip. It’s batteryless, lightweight, and comfortable to hold. It’s smaller and lighter than the Pro Pen or other Wacom pens meant to be used on the higher-end Intuos Pros and MobileStudio Pro.

I weighed it and it’s only 9 grams, so light it almost feels like a drinking straw. That’s about half the weight of a typical active pen (battery included for those that take batteries) and may be too light for people who like the steady balance of a heavier pen, but I don’t mind it.

Drawing on the tablet

Even though 1,024 levels is low compared to the Intuos Pro and more pricey pen display tablets, the patented Wacom EMR digitizer delivers a smooth drawing experience. The pen is sensitive. It’s thinner and lighter than the Pro Pen that goes with the Intuos Pro. 1,024 is a little bit less sensitive than 2,048, but it’s plenty.

The tablet has a texture that has quite a bit of tooth and is enjoyable to draw on. The nibs wear down a little depending how hard you press. I keep it set to a more sensitive setting so that I don’t have to press that hard). There are extra nibs stored in the top in a small hidden case.

What I really like about this in some ways is its size. I sometimes use it instead of a mouse or the trackpad, as the pen doesn’t put as much strain on the wrists or fingers. It also lets me write notes (to some extent) or sketch. It’s easy to use it for this even when on the couch. It’s light and super-portable.

If I’m packing for a short trip with my Mac laptop, and want to pack very light, I just throw the Intuos Draw into the outside pocket of the laptop sleeve. The Draw’s charger is small and light, too. I really like that it doesn’t take up much space, and I sometimes even hold it like a clipboard, since it’s so light.

What I also don’t always like is its size.  It feels cramped for drawing larger images, requiring a lot of zooming. If I’m drawing a small image, around the size of the tablet itself, then this doesn’t bother me, but usually I’m drawing larger. The size is good for drawing cartoons, designing characters, or sketching out ideas, and editing photos. I’m not a big OSU player, but it’s fine for that.

The buttons are in the top corners. They are cool-looking, but it would be more convenient to get to than if they were on the side. It just takes some getting used to. They’re smaller than on the larger tablets. I tend to want to tap them with the pen, and have to remember to use my fingers instead.

Tapping on the buttons brings up an on-screen menu where you set keyboard shortcuts.

When you click on the physical keys, the on-screen keys come up. This is the Express Keys just set to their default. It’s open in ArtRage Lite but they would come up in other programs too.

Intuos Draw comes only in Small (not Medium or Large!)

It would be nice if there were an Intuos Draw Medium, but for some reason Wacom has decided to have this one starter tablet, rather than issuing larger sizes that also don’t have touch.

With a small active area, small arm movements make a bigger difference. So you have to control your movements more.

I find a medium-size tablet, such as the Intuos Pro or the economical non-Wacom Huion 610 Pro better for more complex work.

The long name for Intuos Draw is the Intuos Draw Creative Pen Tablet. It looks the same as its siblings, the Intuos Art, Photo, and Comics/Manga Creative Pen & Touch Tablet, but these others all  have multitouch, which can be toggled on and off. Each comes bundled with different software. The software can change, but the Art tends to include painting programs such as Corel Painter Essentials. This is harder learn than ArtRage.

This is a popular tablet. People use it for all sorts of things, such as whiteboard presentations.

Tips for getting started

Don’t worry about the Express Keys until you have gotten used to the hand-eye coordination required to use the tablet.

Keep the tablet area mapped to 100% of your screen.

If your monitor is high-res and over 14″, this tablet may be too small. Read our article on choosing the best Intuos to learn more.

Use the pen for everything at first; replace your mouse or trackpad with the pen and tablet.

I’m glad I have an Intuos Draw, as it’s Wacom boiled down to its essence. It’s not my go-to tablet for everything, but if it were my only one I’d make good use of it. I use it quite a bit for smaller projects, I like that it’s so light and unobtrusive, and it’s good for couch use.

Will you miss touch? I don’t miss touch a lot when drawing, as I don’t mind using the art program to zoom and navigate. I miss it when I’m using the Draw as a mouse/trackpad in non-art programs..

Touch can be toggled off on the tablets that have it, so if you decide to get one that does have touch, you’re not forced to use it, as at times you might not want to.

Do you need the wireless kit? It’s convenient and if cords bother you or you’re short on USB ports, it may be worth getting. But it’s certainly not a necessity.

The Intuos Draw review is a thumb’s up.  is a helpful, sporty, affordable, hardworking little tablet that simplifies things. It’s good for students, beginners, photographers, and crafters, as well as more advanced artists.

Learn how to find the best tablets for drawing.

Looking for something larger and economical? See this Huion review.

See the Intuos Draw on Amazon