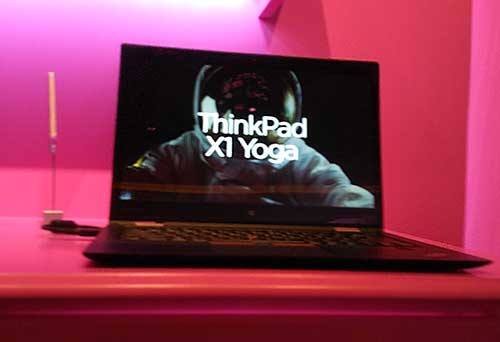 The ThinkPad X1 Yoga 2016 was released at CES this year. I’s a business laptop very similar to the X1 Carbon but with a touchscreen and active pen. It has several innovations. One is that one model sports an optional OLED display. That model will be released in April, 2016. OLED offers richer colors and deeper silky blacks. The second innovation is that the pen, which is battery-free and has 2048 levels of pressure sensitivity, can be charged in the chassis. This is already done with the iPad Pro using their digitizer, but it’s new for a PC with a Wacom digitizer. The third “first” is that at release time, it’s the thinnest and lightest 2-in-1 out there. Preliminary feedback has been positive for both the computer itself and the drawing experience. You don’t have to worry about pen batteries, and the laptop is plenty powerful enough for Photoshop and more. Like other ThinkPad Yogas, it bends into the traditional ThinkPad Yoga’s four modes and  has the 360-degree swiveling hinge.

The computer is lightweight and downright skinny with a .66″ profile, and the The ThinkPad X1 Yoga could make artists very happy, if they can afford the price tag.

Going back to earlier ThinkPads, the pen, with 2,048 pressure levels, gets stored inside the laptop body. But differing from earlier ThinkPads, this pen does not have a battery, but a tiny capacitor. To charge the pen, you can insert it into a port in the laptop (as with the iPad Pro’s Apple Pencil) and it only takes 15 seconds to get a charge that lasts up to 100 minutes. So you’ll never need to worry about pen downtime or pen batteries. AES pens do have a bit of jitter, as you can see in the video below, but it’s manageable. They do not suffer from the bad jitter around the edges of the screen that plagues traditional Wacom EMR. There is less parallax than EMR, and a slightly lower hover distance, the distance at which the pen causes anything to happen. It’s high enough to still have good palm rejection. The initial activation force is low–even though AES is similar to N-trig, to me it feels more on the Wacom side even when compared with the new Surface Pen.

Like other ThinkPad Yogas, this one has 4 modes, or positions: Laptop, Stand, Tablet, and Tent. 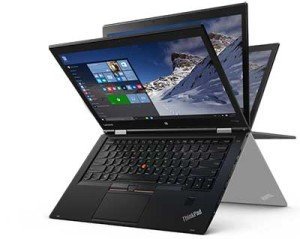 Because the ThinkPad X1 Yoga 2016 has Lift-n-Lock keys that disable the keyboard when folded into tablet mode, you will probably want to use an external USB or Bluetooth keyboard to access keyboard shortcuts when drawing in tablet mode. You could open the whole thing up into an open clamshell, since the hinge opens to 180 degrees, but it’s awkward to draw that way. The keyboard is full-size and backlit.

You might not want the OLED model, because the screen can burn in.

The pen that comes with the Yoga skinny, though the length is decent. You might want to buy a thicker pen if you prefer to draw with one. (I’m searching for a link to that pen).

Traditionally, Ultrabooks have exchanged power for portablity, but this one has plenty of power.

The Lenovo ThinkPad X1 Yoga can run full desktop programs such as Photoshop, Illustrator, Manga, and all that, as well as Metro Apps such as Fresh Paint.

The poor laptop was put to military-grade endurance tests against moisture, drops, fungus, and more. The full-size, backlit keyboard is spillproof. Speaking as one who once fried a motherboard with lemonade, I appreciate that.

For more explanation of the different types of art tablets, see our front page article.

This high-quality all-in-one should be a good bet for artists.

This is a preliminary review/article, since it just came out.