The Toshiba dynaPad is a thin, lighweight Windows 10 tablet with a Wacom pen that gets 2,048 levels of pressure. At 12″ and with an art-friendly 3:2 aspect ratio, this could be the portable drawing rig we’ve been waiting for. One caveat: its Atom processor is not ideal to use large programs such as Photoshop. 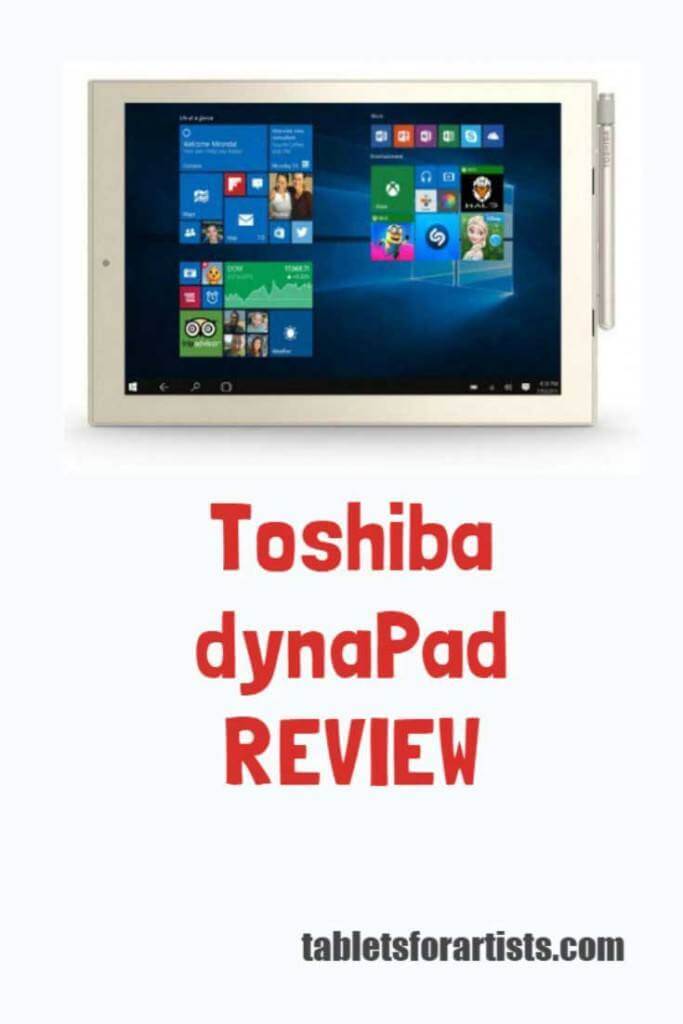 See it on Microsoft.com

TYPE OF TABLET
2-in-1, keyboard is optional

PORTABILITY
Excellent, as it’s so lightweight. Will need a case to protect it, unless you have the keyboard attached and covering the tablet face.

FOR LEFTIES
The TruNote handwriting app is set up for either hand, making this a good choice for southpaws.

The keyboard is not included (it was when Toshiba was selling this, but now it’s being sold by Microsoft and does not come with the keyboard)

BATTERY
not replaceable by user (as is standard with tablets)

I have confirmed with Toshiba that the one for sale on their site comes with the pen and keyboard included. However, this will not be the case in retail stores when it goes on sale in those. I will be updating this post as more information and stores become available. UPDATE: the dynaPad is no longer directly for sale from Toshiba. You can get it from Microsoft. The keyboard is also for sale at Microsoft but is an extra purchase. See the keyboard at Microsoft.

This mobile Windows 10 tablet the product of a collaboration between Toshiba and Microsoft, was released last fall in Japan, and was released at CES 2016 for the U.S. market. It’s a 12″ Windows tablet with a Wacom digitizer and fine-tipped pen that affords 2,048 levels of pressure sensitivity. It’s more affordable than most tablet PCs. Its digital inking offers a pen-on-paper like experience. The digitizer is AES, with a battery-powered pen.

Though this tablet is drawing comparisons to the Surface Pro 4 and iPad Pro, the Atom processor isn’t as powerful as processors on those, but this is a great digital sketchbook. It’s much more powerful than an Android or iPad for art, since you can run full programs on it, not just apps. It’s actually very, very similar to the Microsoft Surface 3.  CPU-hogging programs may lag or crash, especially if you are using a lot of filters and layers. It’s best for smaller art programs such as Photoshop Elements and Sketchbook Pro, or apps like Fresh Paint. You will be able to create high-res images and use layers.

The display is made of two sheets of glass and a metal mesh sensor. Gorilla Glass is on top. A fingerprint-resistant coating gives the screen surface a bit of bite, as on the Cintiq.

If you’re using the Microsoft Edge browser in Windows 10, you can go to town doodling and writing notes on your captured Web pages. 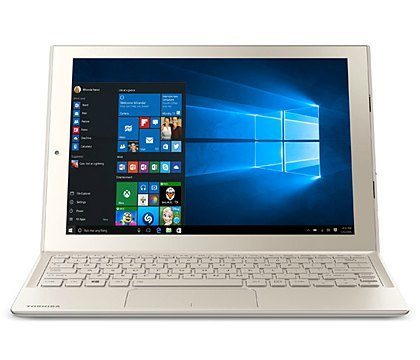 Toshiba dynaPad with optional keyboard that connects via magnets. Click image to see more info at the Microsoft Store.

SCREEN
At release time, this is the thinnest, lightest Windows 10 tablet around.

PEN
The battery-powered, fine-tipped metal pen feels solid in the hand, yet is not heavy. It looks like a ballpoint pen, or like the Surface Pen. It conveniently attaches to the side via a plastic pen loop.

The tablet feels solid and well-built and has an attractive, square-cornered design. The 3:2 aspect ratio, replicating the classical artist’s concept of the Golden Mean, is a positive for drawing.

This tablet also won’t work with the pen from the Lenovo Thinkpad Yoga 14, which is also ES (I know someone will ask!) It may have limited use with other ES pens, but we recommend only using the TruPen.

Extra dynaPad pens are not yet for sale, but I expect they will be. It did take a little while for replacement pens to come out after this tablet’s predecessor, the Encore 2 Write, was released. 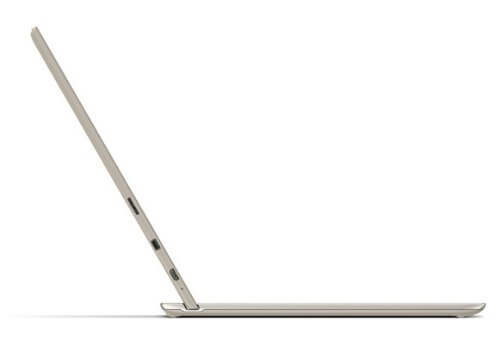 DRAWING ON THE DYNAPAD

The dynaPad comes with Toshiba’s TruNote, TruCapture, and TruRecorder, TruNote Clip and TruNote share apps. You can share handwriting in real time, and make screenshots. This suite of apps is made to integrate with Microsoft Office. (It does not come with Office; that must be purchased separately.) Collaborative projects with digital inking is growing, as designers, artists, and architects come up with new uses for it. (For a bit more info on Wacom’s role in this, see my CES post)

The keyboard is optional and attaches by magnets. fold the tablet over the keyboard to make it all one piece, thus protecting the screen. You cannot, however, adjust the angle of the tablet when it’s attached to the keyboard. The keys are deep and type comfortably. Toshiba has paid great attention to detail and user experience.

Because this has just been released, there aren’t too many yet. One initial Toshiba dynaPad review praised it as being very comfortable to hold. The high-grade plastic casing’s rubberized texture, and the light weight of the tablet, provide this comfort.

CONS
Atom processor decent, but not like tablet PC
4GB memory not upgradeable
battery can’t be replaced by user
sound quality from speakers not that good

The Toshiba is a rival to the Microsoft Surface 3 (even though Microsoft had a hand in the Toshiba), which has an Atom X7 processor and comes with configurations of 2GB and 4GB RAM and 64 and 128GB flash storage. Both have fine-tipped pens and palm rejection works well. The specs are not that different. The main difference is really the digitizer.

Surface 3 has an LTE option and more storage options. It has an N-trig pen that will give you 256 levels of pressure. The pen and keyboard are sold separately.

The dynaPad has a Wacom pen with 2,048 levels of pressure. If you order from Toshiba, the pen and keyboard are included. The Surface 3’s kickstand is adjustable but the dynaPad’s keyboard does not allow adjusting the position.

For art, I would pick the dynaPad over the Surface 3 because of the Wacom pen with more pressure levels. As well, handwriting feels more like writing on paper.

If LTE and/or an adjustable kickstand are important to you, you might want the Surface 3. That’s also good for drawing and note-taking, but I find the Surface pen drawing and writing to be less fluid.

Tough comparison; the Apple Pencil is unique because you can draw with the side of the pencil “lead,” making it the most natural-feeling stylus, but I think it’s more important to be able to use full programs or full “middle” ones such as Photoshop Elements or Sketchbook Pro. The iPadPro has a powerful chip, but you’re still stuck only with art apps. If art apps are OK for you, then you might love the iPad Pro just for the Apple Pencil.

This is an exciting development and more power and pressure sensitivity than we usually see in a mobile device. It’s an excellent and forward-looking drawing tablet designed with both drawing and writing/business use in mind. The collaborative features open a new world, not one everyone needs, but you never know. The pen is responsive and the tablet has a generous screen size that’s like a sheet of regular paper. The prime benefits are quality and convenience, not the computing power, which is not that powerful. This is a great tote-around. This Toshiba dynaPad review is a thumbs-up.

See it at Microsoft
ACCESSORIES

If you’ve gotten a dynaPad and now need a carrying case and other accessories, there are some, such as this IVSO bag that comes in four colors, on Amazon.

For a general introductory article and description of types of tablets, visit our homepage.