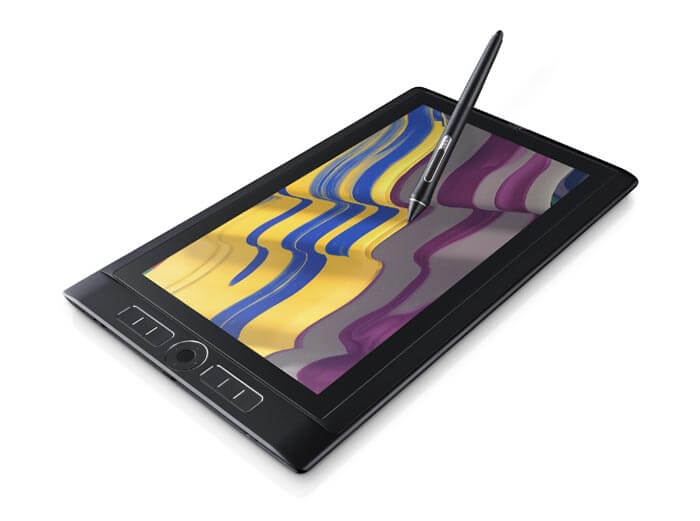 Wacom has created an amped-up successor to the Cintiq Companion 2, this one a lightweight portable with up to a 4K display, 8,192 levels of pressure sensitivity, discrete NVIDIA graphics, and a 3D camera. It will run Windows 10 and full versions of desktop programs such as Photoshop, Illustrator, Maya, and Cinema 4D.

Engineers, artists, and designers can all tote it around, as it can run not only art programs, but CAD. There will be two sizes: four versions of a 13.3″ display and two 15.6″ models, all with Intel processors, and NVIDIA Quadro M600 or M1000 graphics, depending which model. Storage will range from 64GB to 512GB.

The pen will be the all-new Pro Pen 2, with 8x the pressure levels of the current 1,024-level Pro Pen.

Some of the models will include an Intel 3D camera called RealSense, which captures 3D scans that can be opened in 3D programs such as Zbrush.

(For those without the budget for this who still want to work in 3D, Wacom is also releasing the Intuos 3D).

Use as standalone or as Cintiq with Mac or Windows computer

The controls for the Wacom MobileStudio Pro will be similar to the ones on the Cintiq and Cintiq Companion line, including ExpressKeys and Touch Ring, and programmable pen buttons. As with the Cintiq Companion 2, users will be able to attach the MobileStudio pro to any Mac or PC and use it as a Cintiq display and input device, so you’ll be able to use the Mac OS as well as Windows.

With these high specs and high expectations, we can only hope they’ve improved upon the flaws of the Cintiq Companion 2, including loud fan noise and not-so-great battery life. This has got to have a pretty major battery to power the display and discrete graphics, and hopefully it will also power the computer for a long time. The NVIDIA graphics should keep things moving without lag. Maybe the MobileStudio Pro will be the moveable feast so many are waiting for.

See more about the Wacom MobileStudio Pro on Amazon.