The best rugged iPad case should be something you only need to buy once. These types of cases are the most protective. Some are military grade. Some are waterproof. Some have keyboards. Some seal the tablet in a hard, tank-like shell, while others buffer it with bouncy material. Most are drop-proof to a certain height. Some come with screen protectors that keep liquids from seeping in. A durable iPad case is a good choice for families with kids, or any active adult.

These are five of the top rugged iPad cases out there, selected for their high quality, features, and user praise.

For pointers on what to look for in a rugged case, please read our article. 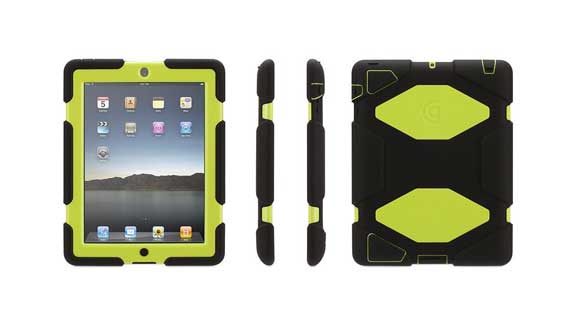 This military-grade Griffin Survivor iPad 1,2, and 3 case might be the best rugged iPad case for you if you work out in the field, on a dusty construction or sports site, take photos out out in the elements, or have kiddies who spill milk onto the screen. It’s waterproof and dustproof.

The Griffin’s hard polycarbonate frame is surrounded by robust, soft silicone, protecting it from shocks and vibrations. The silicone’s inside has a relief waffle pattern that adds air cushioning, and the back has a tread design that provides additional padding against drops. A built-in screen protector protects the screen from dust, wind, and rain.

Raised silicone edges provide a buffer if you drop the tablet directly onto its screen, but the screen could still be damaged depending on the fall. A sleeve would provide additional protection.

The included small workstand clips cleverly onto the case. You can take off the stand and unfold it so that it will hold the iPad in different positions (only in landscape mode).

The silicone surroundings have hinged plugs that cover the iPad’s ports, connector, and lens.  A clever indentation in the silicone lets you keep the rear-facing camera port open as long as you wish by “buttoning” it down.

This durable, rugged, waterproof case adds almost a pound to your iPad. 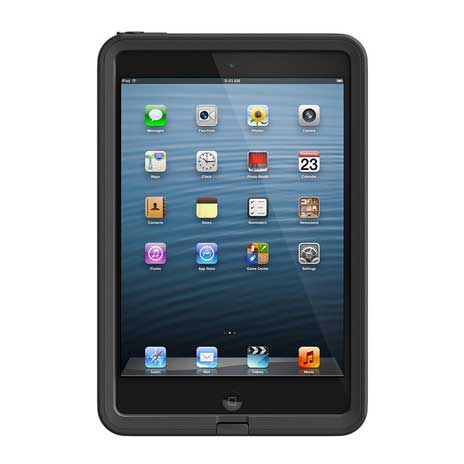 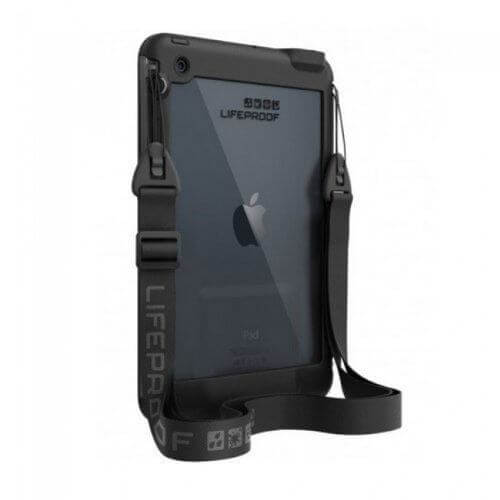 A popular choice for the best rugged iPad mini case is the Lifeproof Fre. It protects against dirt, snow, water, and drops. It’s waterproof for an hour up to 6.6 feet (2 meters) and drop-proof for up to 4 feet, by military standards.

The Fre’s transparent back shows off the Apple logo. The rubber around the case makes it grippable and provides padding for the edges and a little buffer in case the iPad falls on its screen. It it does not provide thorough screen protection, so as with any case that leaves the screen exposed or with just a thin screen protector, you might want to get a sleeve as well. The Fre comes with a super thin, clear screen protector as well as a removable shoulder strap.

All the ports, controls, and buttons are accessible. Its sound-enhancing features make the iPad even more enjoyable for listening to music. The case has an anti-reflective optical glass lens for the camera, so it won’t distort or blur your photos and videos.

The description on Amazon is vague about which models this case is for, so we checked with Lifeproof and it is for the iPad 1, 2, and 3. It plays well with retina and the iPad mini 3 touch ID.

Lifeproof’s customer service is prompt and replaces cases if anything goes wrong.

Weightwise, the case is barely there–just 130 grams. If you want something non-bulky, this might be the best rugged iPad case for the way you roll. 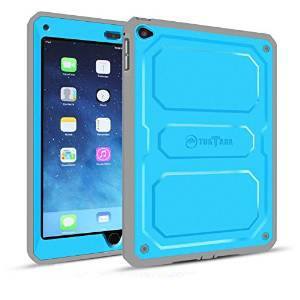 Made of hard polycarbonate plastic, the affordable Tuatara protects the iPad3 on all sides, encasing it in a reptile-like hard shell. It has a built-in screen protector with good sensitivity. Under the polycarbonate is a layer of TPU, thermoplastic polyurethane. TPU is like a soft plastic. It’s far less flexible than silicone, but it doesn’t pick up dirt, lint, and oils the way silicone can, and it’s easy to clean.

This case is easy to put the iPad into. It is shock-resistant (but not military-grade), and its internal grooves and “air padding” help regulate heat and moisture. It is  light and not bulky. It will not interfere with the iPad Air 2’s ambient light sensor or Touch ID. The camera and port cutouts line up well. The screen protector will protect somewhat from liquids and dusts, but not from drops

This is inexpensive, so we’ve picked it as an best rugged iPad case that’s competitive with more expensive cases, and a good choice for families with kids. 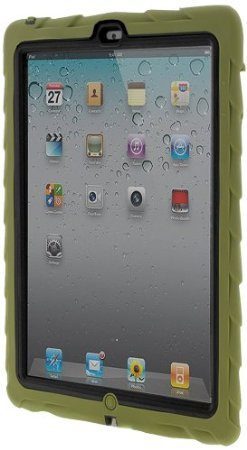 Gumdrop Drop Series Military Edition iPad 5 has more protection for the iPad5 (also known as iPad Air, the first model) than the regular Gumdrop cases, which are also rugged, but this one is even more so. This one is made of silicone and hard polycarbonate, with the soft silicone on the outside. The corner bumpers are reinforced. There is a protective ring around the iPad camera. The screen protector is removable in this military edition.

The case is not waterproof. It does not come with a stand, making it lighter than the Griffin models that have stands. All ports and buttons are covered. This case has had oil hand-applied to the silicone outer layer to make it repel dust.

Gumdrop cases command loyal fans. Some just love the look and feel of them.  Gumdrop’s siliconized rubber bumper surrounds the whole iPad and raises a bit more cushion for direct screen drops than some other rugged cases (still, try not to drop the iPad onto its screen).

The rubber covers the whole back and protects all the ports, but they are still easily accessible. A hard internal plate protects the iPad from drops up to 6 feet. The attractive, sporty, tire-like tread texture makes the case fun to hold and gives it a no-slip grip. The rubber does produce a bit of static that picks up dust.

The Gumdrop is pretty easy to install–you have to push down on the rubber all around the iPad, rather than just snapping the Ipad into the case, but it’s simple. A Gumdrop may be one of the best rugged iPad cases if you have kids.

If you want a durable, but not military-grade, iPad with a stand, try the Gumdrop Custom Hideaway with Stand. This is a good case for kids and has a “fun” look and feel. It’s not quite as protected as the military one, but it’s still very durable and has most of the features. 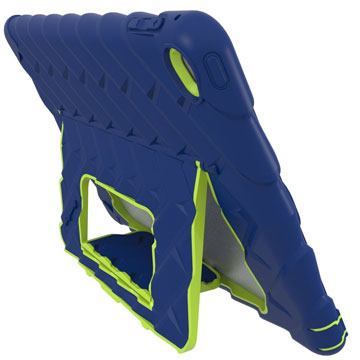 Unfortunately, the iPad Air2’s light sensor is covered by this case, so auto-dimming will not work. 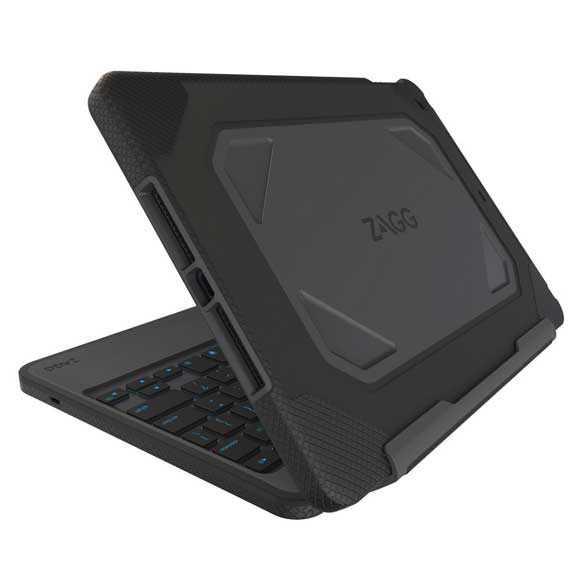 If you’re looking for a really durable iPad case with a keyboard, this might be the ticket.

Like some other rugged cases, the Zagg Rugged Folio is made from layers of polycarbonate and soft silicone that will protect your iPad Air from drops. But the Zagg also features a stainless steel plate under the keyboard for more drop protection as well as a stable surface to type on.

Rubber runs around the edges when the case is closed, to keep out dirt and dust. The island/Chiclet-style keyboard attaches and detaches via strong magnetic hinge. It’s easy to detach the keyboard if you choose.

Some cases require a bit of gymnastics to take the iPad out and put it in, but this case is easy to install.  The case is durable and protects from dust and dirt when closed, but if you’re in a windstorm while the case is open, dust could get into the keyboard. For most uses it’s fine.

It’s NOT waterproof; the iPad ports and buttons are not sealed inside the case.  The case does not come with a screen protector, but you can add one.

My favorite part is the keyboard with its choice of dimness and lighting colors, making typing relaxing or stimulating as you wish.

The case takes four forms: Keyboard Mode, Case Mode, Video Mode, and Book Mode. In Keyboard Mode, your iPad becomes like a Mac laptop. You can open or close the cover to any angle for comfortable typing and viewing. In Case Mode, you can detach the keyboard and just use the case.

In Book and Video Modes, you can turn the screen on the hinge, so in Book Mode you have a slate, so you can read. You can re-attach the keyboard to the back while in Book Mode. In Video Mode, you look at the screen while the keyboard faces away from you (watch the video below to see all the modes).

The lithium polymer battery keeps the keyboard going for up to two years! There’s a battery monitor that lets you see the power left (1-4 lights go on). The keyboard charges via mini USB, but you can wait two years between charges.

The case is quite heavy at about a pound and a half, so with the iPad Air, about two and a half pounds, heavier than some laptops. It’s also not waterproof. But it’s very solid and makes your Air into a well-functioning laptop-tablet hybrid.

Despite it’s not being waterproof, this is very useful and versatile, and could just be the best rugged iPad case for the mini.

See more reviews and info for the Zagg Rugged Folio

Here’s how to tell what model iPad you have:

end of The Best Rugged iPad Case: Five to Consider