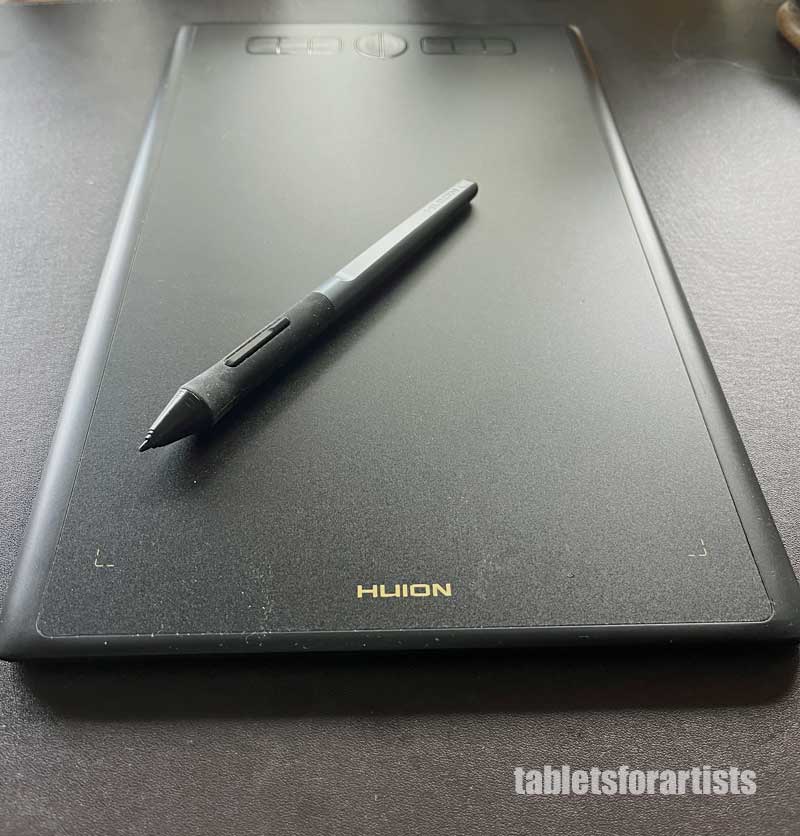 This Huion Inspiroy H610X review will take you through the main features of this graphics table that works as an alternative to the Intuos without the cost. The H610X is the upgrade of H610 Pro V2 (click link to see our review). The company says the footprint of the Huion H610x is 23% smaller than the H610 v2.

Huion is a Chinese company that started in 2011 with drawing tablets, and now makes light pads as well.I was fortunate to receive an Inspiroy H610x tablet from Huion to test.

Graphics tablet (no screen, and must be plugged into a computer or Android device 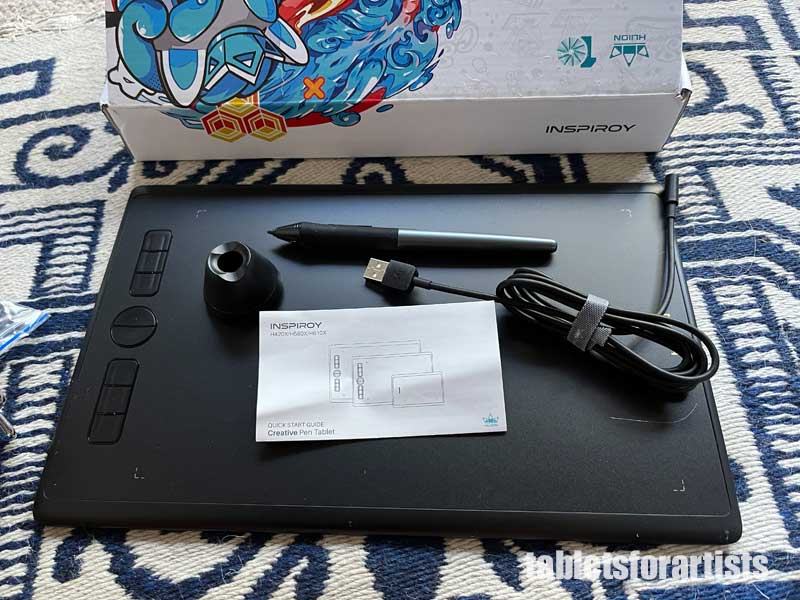 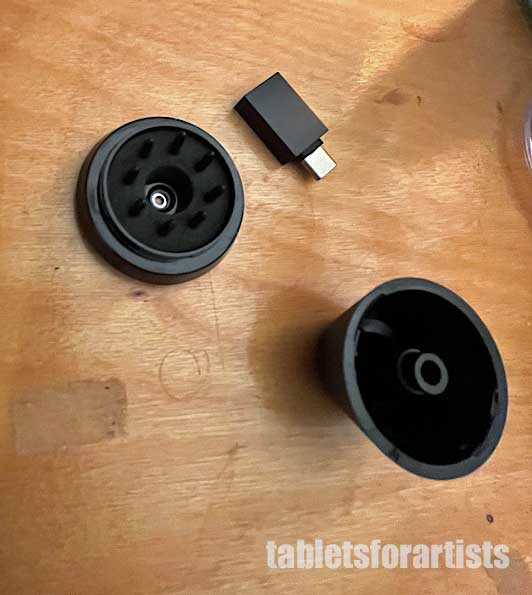 It also comes with this Android OTG adapter and 8 extra pen nibs.

The Huion H610X came in an attractive white box with full-color graphics. Everything was safely packed inside. 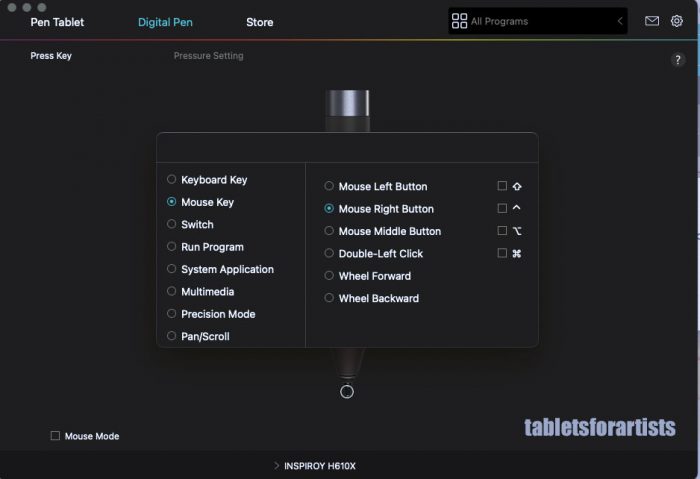 The drivers need to be downloaded from the Internet.

I found that on my Mac, which i had just updated to the latest OS (Monterey 12.6.1 as of this writing) the newest driver on the Huion site installed but didn’t work–I had issues with the System Preferences security procedure. I then uninstalled that driver and tried the second-newest one, and it worked.

The other odd thing was that at first, the image of the pen didn’t show up in the driver. I later disconnected and reconnected the driver and then it showed up fine. I guess the lesson here is “try, try again.”

The word Inspiroy doesn’t appear in the list of drivers, it only says H610X, but that’s the one.

It’s simple to program the buttons, easier than some tablets. You can program the pen buttons as well as the Express Keys and these can be done per app. Some of the menu options include playing multimedia files and creating a keystroke shortcut.

The driver has a good UI that makes things simple, a big plus.

If you’re left-handed, no worries as you can turn the tablet so the buttons are as you wish, and you can map the screen if you want. 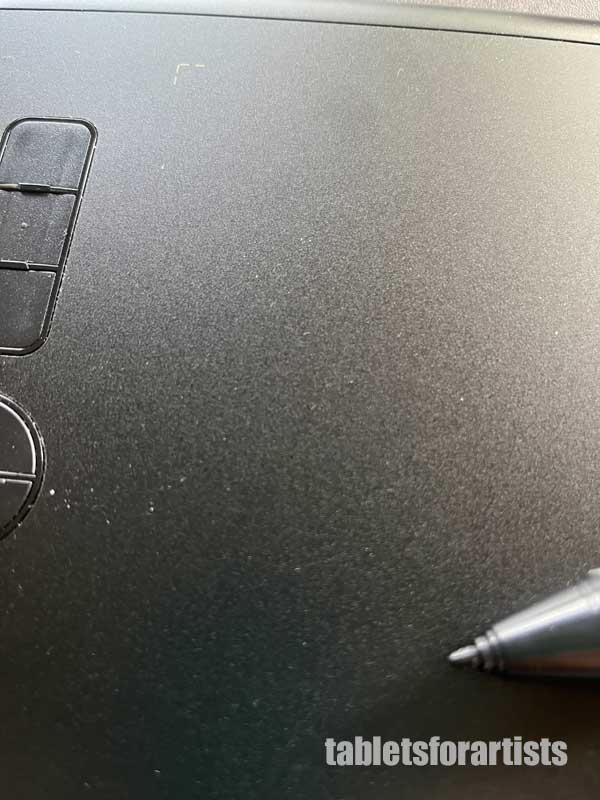 The H610x has a nice beaded matte surface and I prefer it to the old H610, which was more plasticky and did not have the matte surface. Gone is the indentation between the Express Keys and the drawing surface. Also gone are the sloped edge (it’s much more subtle now) and the large bezel. This design is nicer.

The cord is a decent length, about a yard, and the L-shaped USB-C connector fits snugly into the tablet port. There are four rubber dots on the bottom, and the rounded corners of the tablet make it safe to pick up (no sharp edges). The outside edge feels a bit hollow. The tablet does attract some fingerprints, so you might want to wear a drawing glove.

The PW100 pen is a bit lightweight and thick, not like a ballpoint pen. It weighs about .4 oz. or 11 grams. Although I slightly prefer the thinner type of pen, I find the Huion pen easy to use. I like a little more weight to a pen, but more weight can lead to some fatigue. The buttons are easy to reach. 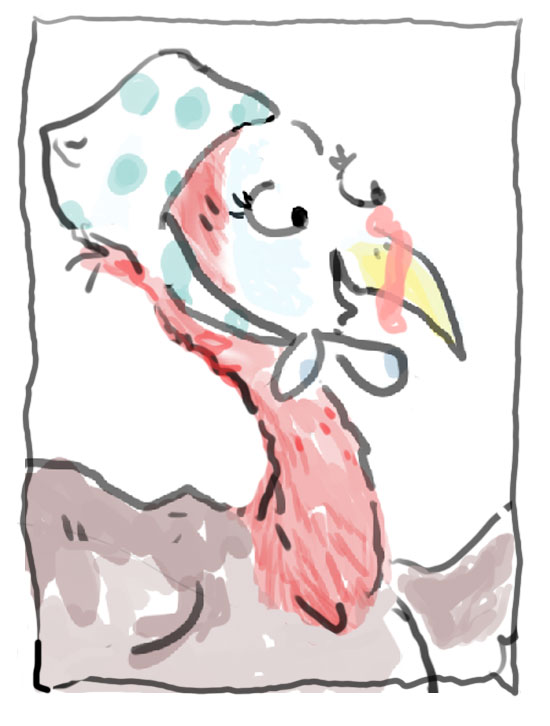 A turkey, because Thanksgiving is almost here

The buttons are pretty comfortable to press. Although there’s not much space between them, a raised bar in between should stop accidental presses of the wrong button. The size is perfect for drawing. I had no trouble with pressure or anything, and the one-on-one setup with the screen works well.

I had good luck in most things. On Windows I tried Photoshop, Krita, Gimp, ClipStudioPaint, Sketchbook Pro, and Inkscape. I was really pleased to get pressure in Inkscape, using the Calligraphy Pen, its one pressure-sensitive brush. I would not expect to get pressure in Adobe Illustrator as the Illustrator brushes that offer pressure do so only with Wacom tablets.

On Mac, I tried Inkscape, Krita, Photoshop, and Gimp. The first three worked well, but as with many tablets, I had problems getting pressure in Gimp.

It’s is a fine affordable competitor to the Wacom Intuos Pro Medium. The drawing area is about the same drawing size. It uses the same type of digitizer, has the same amount of pressure levels and resolution, and tilt. The Huion doesn’t have some of that item’s offerings–namely, bundled software, touch, and a wireless option, but it does have tilt sensitivity. Plus, pressure in the free Inkscape vector program worked, which adds value.

The Huion Inspiroy H610X is a lot of tablet for the money. The size is ideal as it’s big enough to move your hand around, while being portable and not taking up a ton of space. It also fits well one-to-one with many laptop screens. The driver is easy to use, despite a few hiccups–I did have to use the second-newest driver on Mac. The H610x is a great choice for people looking for an affordable graphics tablet for art, design, OSU and other gaming.

Right now, it’s on sale (Thanksgiving/Black Friday 2022) so you might want to gobble it up.