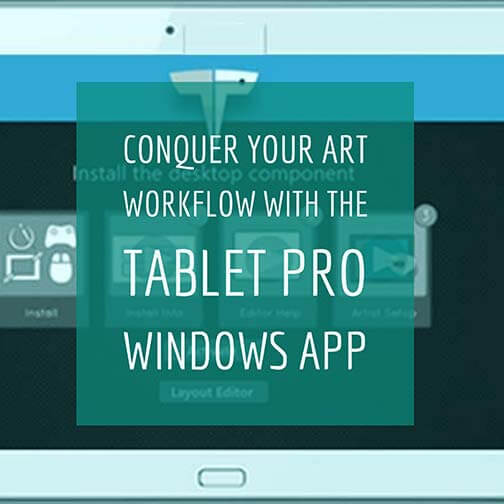 Tablet Pro app lets you ditch the keyboard and mouse

Tablet Pro, an app accessible from the Windows Store, offers on-screen touch controls that can make you work more efficiently, potentially trimming hours from your workflow. We don’t hear a whole lot about Windows apps, and some tablet PC users may have never even visited the Windows Store. But now there’s a good reason to.

The app allows you to ditch your mouse and keyboard and work on the couch or anyplace, because all the controls are moved to the screen. You can program dozens of keyboard shortcuts, use gestures and a digital trackpad, zoom way into any part of the desktop, and use pen and touch simultaneously. More info and videos can be found on the company’s Web site.

Developed by Takashi Yamamoto and Justice Frangipane, the app was once called Tablet PC Mouse.  Its features have expanded to make it a must-use for serious digital artists who want to get control over the Windows touchscreen.

The app works on any device running Windows 10 or 8.1 with multitouch–it will work on pen-only touchscreen computers, but you won’t be able to use gestures.

There are two stages to installation–first the app, then the desktop program. Both are free and provide the touchscreen trackpad with basic gestures. There are also several optional paid features. You get an automatic 14-day free trial of the whole package upon downloading the desktop program. If you continue, you can purchase the package or buy them a la carte.

The Artist Pad is the feature that would be of most interest for readers. Here’ s a quick look.

I highly recommend that you sign up for the free “14-day challenge” email series where Justice walks you through each step via video.

If you use a tablet PC, you’ve probably experienced the conundrum–a tablet ought to offer mobility, but you end up having to use a keyboard to access shortcuts, as well as a mouse and trackpad to move the cursor.

With a convertible tablet PC, you may end up using an extra keyboard because your computer’s keyboard becomes inaccessible in tablet mode, or, you may be using a clamshell laptop and leaning over the keyboard in order to reach the screen–you may even be working “upside-down” to avoid reaching your arm over the keyboard to access the screen. Or you may use a detached tablet on the couch or on a plane, with the keyboard awkwardly next to you on your lap. No more acrobatics are needed–Tablet Pro solves these headaches.

There is precedent for improving productivity via on-screen controls– the Vaio  Z Canvas has a shortcut menu, and there’s Radial Menu, which expands on Wacom’s radial menu. (See all these methods in this post about best tablet computer hacks), but Tablet Pro goes much farther, giving you dozens of shortcuts and layout options.

The main timesaver is reducing the amount your hand has to travel to access tools. All those little seconds add up.

One common annoyance is that Adobe icons scale to such a small size. You will be be able to see them larger when using the app. And because you can increase the size of buttons, “fat finger syndrome” is abolished.

You can also use touch to adjust volume and brightness, and swipe between desktop and your projects, and swipe through slideshows. I especially like the ability to zoom in not just in art programs, but to anything. It’s like having a skin over Windows 10 that makes it do just what you want.

With a Cintiq, the hotkeys, buttons in the tablet body that let you program keyboard shortcuts, rank highly for the way they increase productivity. Now you can have shortcuts on any tablet PC using any digitizer, such as the Surface Pro, which uses N-trig.

The Four Parts of Tablet Pro

The four paid desktop features are Artist pad, Zoom Desktop, Virtual Mouse and Gesture, and Game Pad. I would suggest Artist Pad as a minimum, but I also really like Virtual Mouse and Gesture and Zoom Desktop. It’s helpful to be able to zoom in on anything on your desktop. It’s cheaper to install the whole shebang than just do three features without Game Pad. (And you could use Game Pad to program shortcuts as well.)

This screenshot shows you one of the presets for the Artist Pad. You can see that the pad can be transparent , and you can also bring up on-screen keypad and make that transparent. 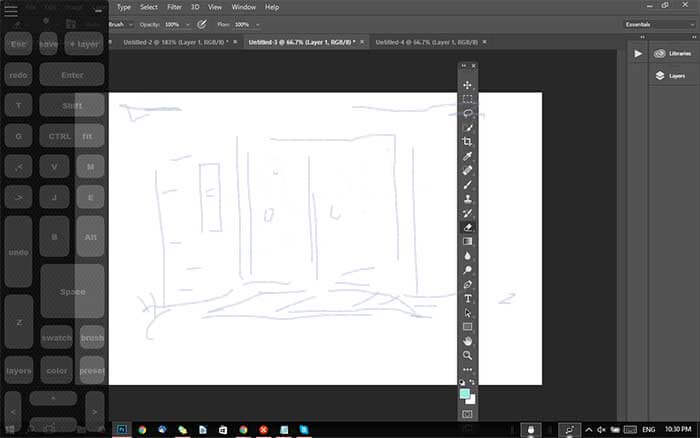 Because the app does so much, there is some complexity in setting it up, especially the more advanced features. The primary users of those will be animators and artists with a complex workflow. Following the 14-day challenge will increase your understanding of its many features, and if you’re a quick study, there’s an option to go through the videos faster than the 14 days.

Not all artists need keyboard shortcuts; even if they’re not for you, the app is useful for different work styles and even for non-art use. A lot of businesses work on tablets now, and Tablet Pro is currently being used by thousands in hospitals, casinos, by U.S. government land/property assessors, special-effects studios, professional artists and designers, and more. With 2-in-1s becoming the norm among the public, it makes sense to have on-screen controls that go beyond just the built-in on-screen keyboard.

Tablet Pro lets you customize the Windows interface, lose the mouse and keyboard, and enjoy Cintiq-like hotkey functions. It may be just what you’ve been waiting for.

Here it is in the Windows Store.

Summary
Article Name
Conquer your workflow with the Tablet Pro Windows app
Description
Tablet Pro is an app for Windows that gives you Ciniq-like on-screen hotkeys. It speeds up your digital workflow. It can be used for art, gaming, and writing, and even lets you zoom way in to your desktop.
Author
Tablets for Artists
Publisher Name
Tablets for Artists