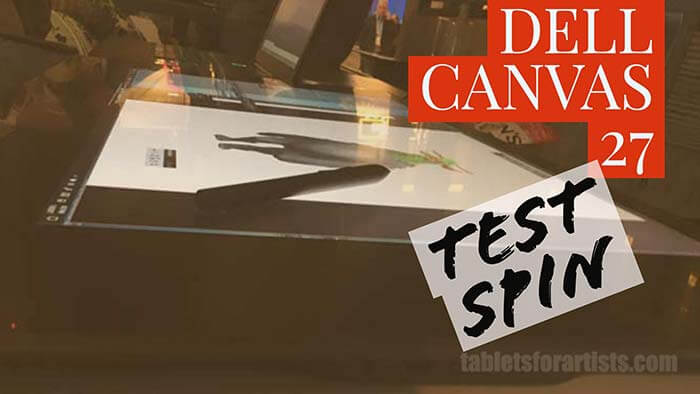 The new Dell Canvas 27″ tablet monitor, slated to hit the shelves at the end of April 2017, was on display at this year’s CES 2017. I was fortunate enough try it out. It’s the first large art tablet monitor made by Dell. 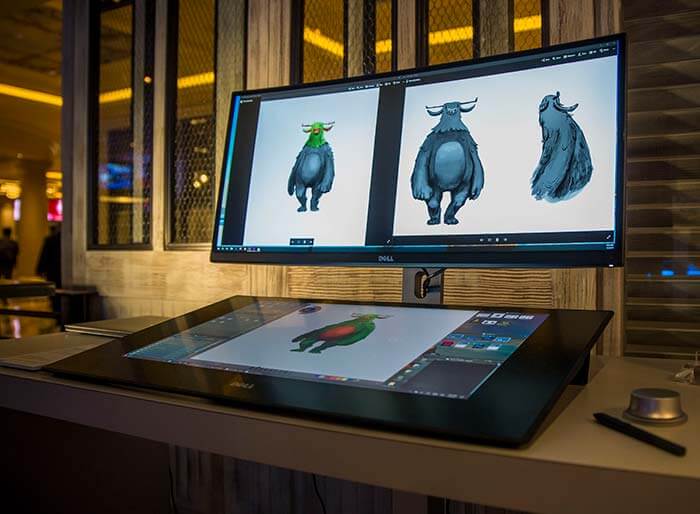 The Canvas is a bit like a Surface Studio except that the Canvas is a tablet monitor, not a 2-in-1, so it’s more similar to the Cintiq 27″ and has the same resolution. Dell states the Canvas pen is Wacom EMR. (Dell’s recent products have used Wacom AES, and before that they used Synaptics).

EMR is the most sensitive and what Wacom uses on its own Cintiqs. This pen was thick but comfortable and had two buttons. Its girth and simple barrel shape reminded me of pens by Huion more than the skinnier, shapelier pens used by Wacom and Microsoft. 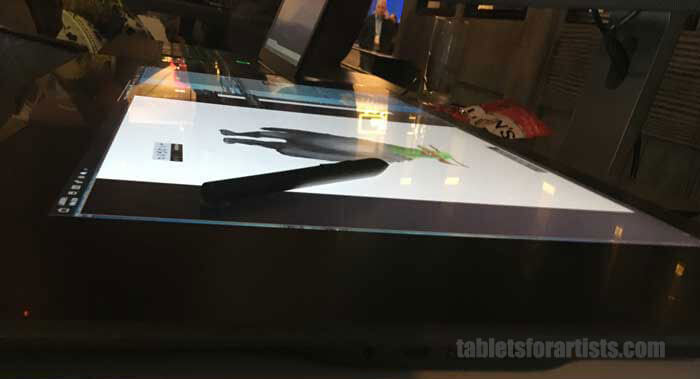 It only does Windows

The Canvas has to be connected to a computer, and that computer has to be running Windows. This is a big difference from any other tablet monitor, as most will work with Windows PCs or Macs out of the box. (Maybe Apple will fight back by coming out with its own tablet monitor or all-in-one with Apple Pencil!)

Dell partnered with Microsoft on the Canvas, and the Canvas will work with the Creators Update, and will run with AVID. Dell, naturally, suggests using the Canvas with the Dell Precision workstation, which is powerful enough to create VR content.

The Canvas is protected by Gorilla Glass. It has some cool functions like virtual desktops, and it comes with two kinds of “Totems” (ahem, Surface Dial clones) that you can twist and turn. 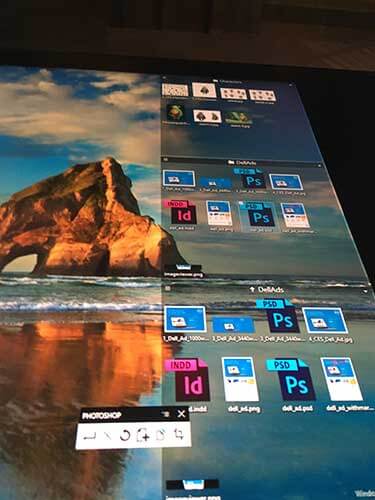 Dell’s initial idea was the SmartDesk, where the two monitors would interact, but it’s not clear if that will come to fruition or if it will be the regular routine. In this case, there are actually three monitors–the laptop, the Canvas, and the eye-level monitor.

The Dell Canvas’ wide color gamut covers 100% of Adobe RGB, which is a welcome feature for pros who print their own work.

Palm rejection worked well. The stand is adjustable, and I like that it can lie flat as a desk, something the Surface Studio’s hinge does not allow.

As you can see, the pen is accurate with no jitter. It also had no detectable tilt sensitivity (which could change) or perhaps there were tilt settings I needed to adjust.

Two Totems for the Dell Canvas 27

To me, two Totems plus the pen and multiple monitors is a lot to think about and the idea of the 20-point multitouch, which can accommodate an extra person or two, starts to seem a bit left-brained. Right now there are not a whole lot of apps for the Totem and Surface Dial, but these are in their early stages. 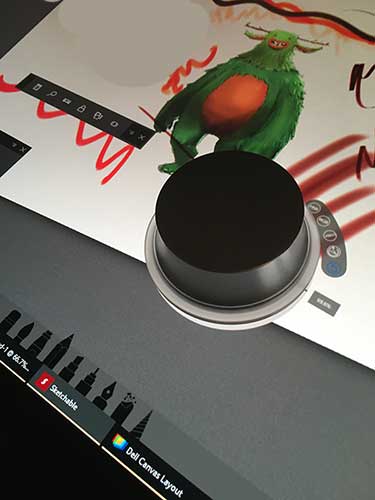 The whole thing is very BUSY pus there are lots and lots of on-screen menus. It’s not exactly Zen, but it offers a lot of options. Right now the levels of pressure sensitivity are not clear, nor are other specs.

For now, my hands-on experience with the Dell Canvas 27 leaves me feeling like it’s not a huge leg up over other 27″ tablet monitors as far as hardware.

The jury’s out on the software, as that’s such a big part of this, and it is impressive. But what are the specific benefits? Do all the accessories and tools make the designer’s workload easier, or is this an exercise in deconstructing and fragmenting workflow?

For most users who draw, having the top monitor is not needed. It looks cool, and there are good reasons to use it, but the Canvas doesn’t need it. For multimedia design, or if you want to make sure colors match, or you want to see your work higher-res, it makes sense. But it’s part of the packaging of the Canvas.

Because at the time of this writing, the product has not yet come out, this Dell Canvas review is focused on testing the pen, examining the screen, speed of the computer, and more. For now, I’m not sold on the Totem/Dial, though that could change, and no one’s forcing me to use it. Microsoft’s Surface Dial is an optional purchase, unlike the two Totems, suggesting that Dell feels they’re integral to the software. 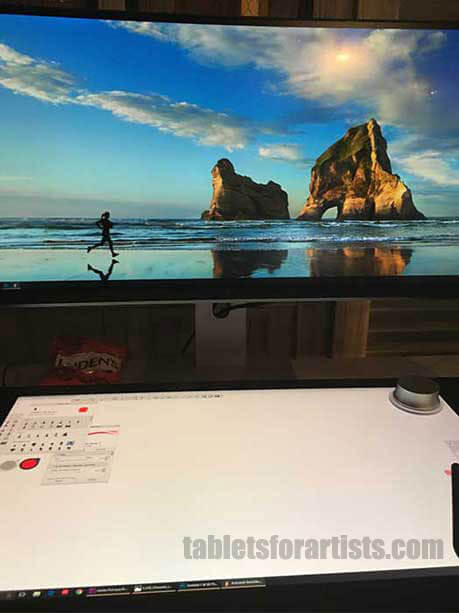 The display is certainly pleasing and I like the idea of the eye-level monitor, though that’s an individual choice. For drawing, I would probably just prop up the Canvas to 20 degrees and use that.

Dell released a lot of innovative and award-getting products at CES, including a super-thin 8k monitor and the Dell XPS 13 2-in-1, which uses Wacom AES.  Dell has put out numerous tablets, but somehow you didn’t hear about them all that much–most of them have been small portables, such as the Venue series. They had a rocky journey with three versions of a Synaptics pen before switching over to AES.

The pen and digitizer information on their site seems to confuse people, as I can tell from the questions I’ve gotten, but this is de rigueur with large companies who didn’t focus on pen tablets. Now, Dell has stepped into the limelight with this large art gizmo.

Now Dell is working with Microsoft and incorporating Wacom, aiming to get in more seriously on the art action. I particularly like the software, such as the overlay, and look forward to seeing the finished product.