Artists take note: an iPad case with notepad and pen holder is a big draw

Nothing’s worse than forgetting a great idea, and sometimes the iPad isn’t charged. Worse yet, you’re digging in your bag for your stylus. Now there’s reason for hope. There are high-quality and affordable iPad cases with notepads, pen holders, or both.

First of all, make sure the case will fit your iPad.

Here’s how to check your iPad model number: Look at the very small type on the back of your iPad  for these numbers.

While most pen loops will fit most styluses, some of the thicker styluses may be too large. 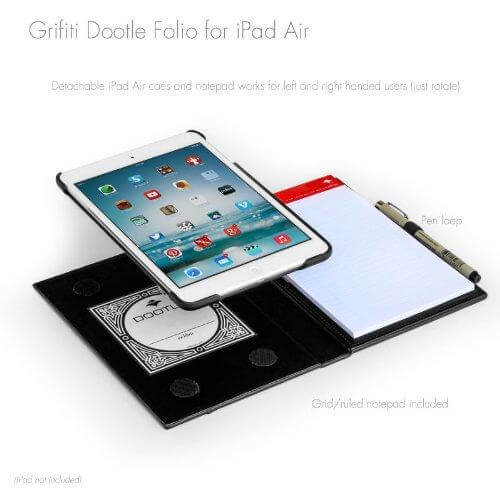 This is an attractive and versatile iPad case with notepad and pen holder being the main draws, so to speak. We also like that the iPad bezel is exposed; it just looks nicer. The corners and sides are protected by an imitation-leather cover. The case is reversible and ambidextrous; you can set it up for right-handed or left-handed use by switching the positions of the iPad and Dootle Pad (as the notepad is called). It’s compatible with the Apple Smart Cover. 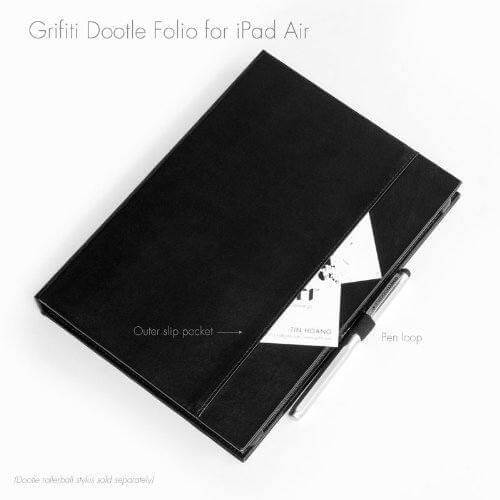 It comes with a 6 x 9″ combo ruled and grid Dootle Pad notepad that’s basically graph paper. Your stylus or pen (would be nice to have two loops, huh) will perched in a pen loop on the outside of the case. The sturdy back cover is form-fitting and cutouts allow access to all ports as well as the camera. The case also has a cover pocket for business cards, cash, or notes. The iPad secures to the case via good old Velcro. You can put your Apple Smart Cover inside this case if you wish.

It has a large outer slip pocket on the back into which you can put the doodles you’ve drawn on the Dootle pad, or anything else you want to put there. Since it’s on the outside, it’s not meant for things like cash or credit cards, though.

Cons–a little heavy and bulky, which makes sense as it has a notepad.

Here’s the version for the iPad mini 1, 2, and 3. Like the larger version, it’s also Apple Smart Cover Compatible. 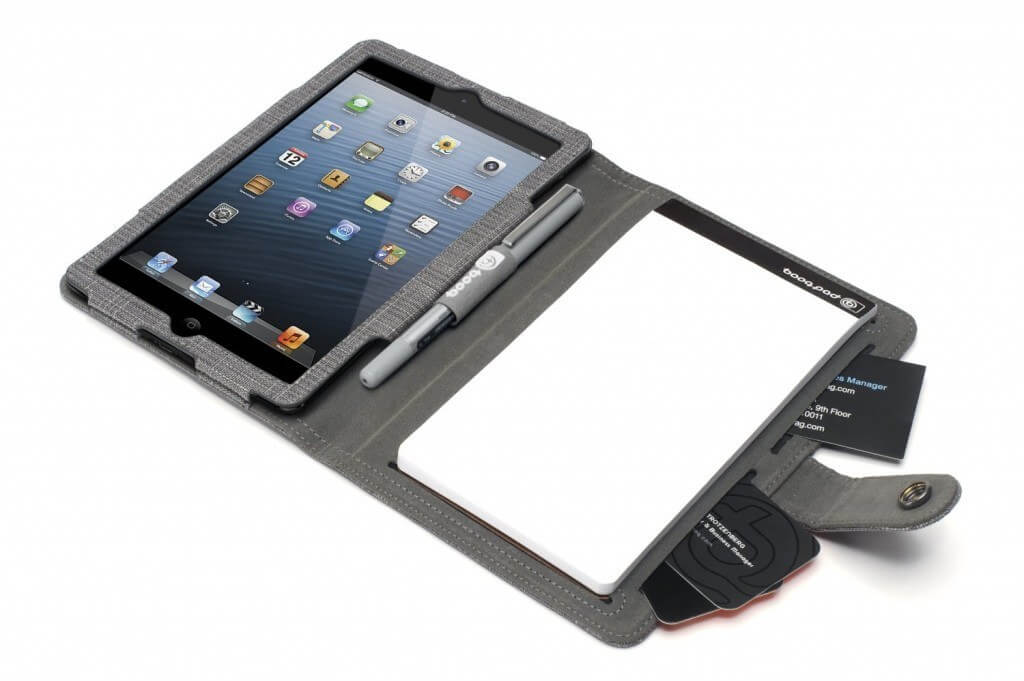 The Booqpad for iPad mini is similar to the iPad Air, but comes with both a stylus holder and notepad, making this a great choice for those who scrawl in multimedia (digital and paper).  The cover also has clever pockets for business cards, tickets, cash, what have you–you can hide them away. Like its larger cousin, it’s ambidextrous. The notepad is made with 30% soy ink. The paper notepad is  4-1/8th x 7-1/4th inches. You can find paper refills here on the Booqpad site–the notepad that says mini.

Cons: no wake/sleep; cover does not fold into a stand; no camera hole; pen loop caused problems for some, loosening the back flap when it had the pen in it and some didn’t like the way the pens fit. Seems this case is nice-looking, and most users loved it but some had some issues with it. 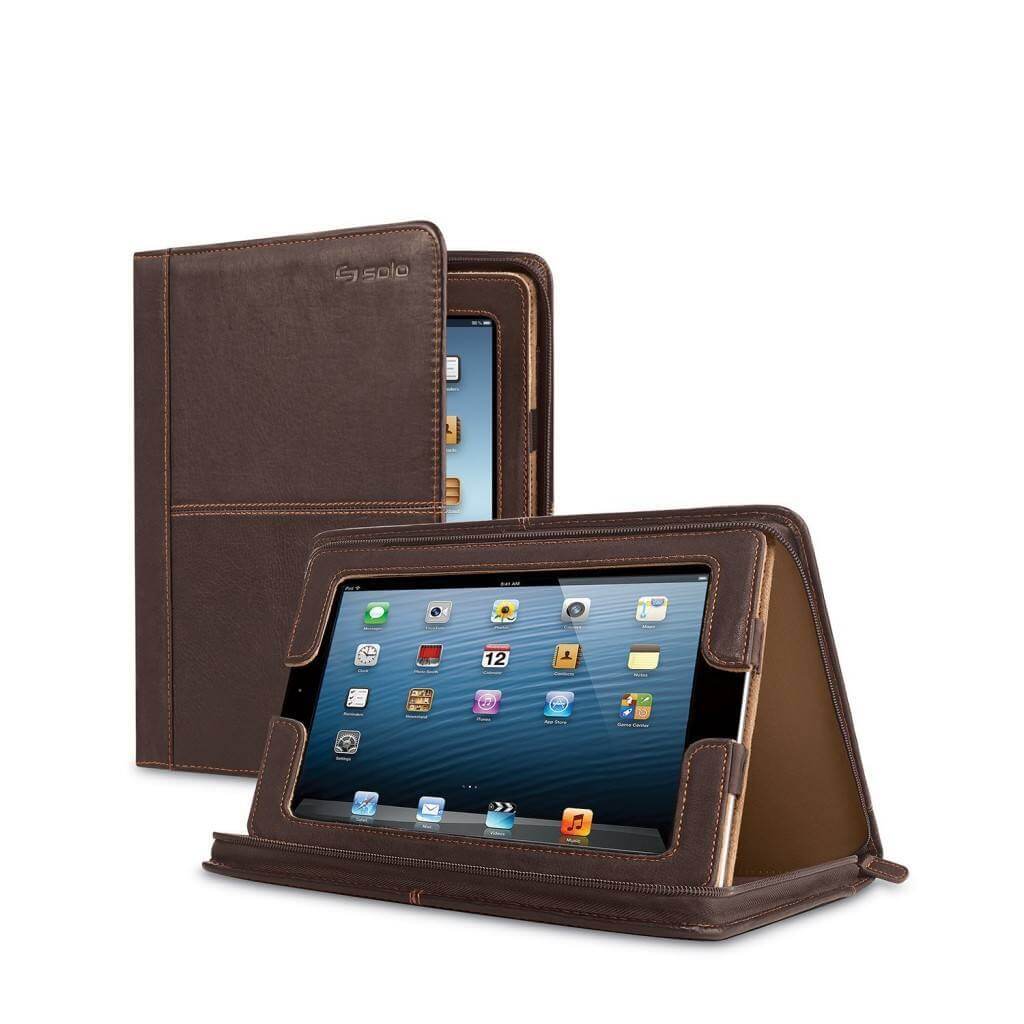 This Colombian leather, high-end folio case fits iPads 1-4. It has an unusual ziparound (zipper) closure. It’s sleek and luxurious, but ready for business. Inside it (there’s only a small photo) are a 5 x 8″ paper notepad, and pockets for business cards and other items–a mini-organizer.  The gold stitching forms a nice contrast with the case’s warm espresso color. There’s also a pen holder on the inside. This case isn’t form- fitting, so can hold iPads 1-4.

Cons: Lacks a back camera hole.

A little bulky to put in a handbag, but great to carry the iPad around by itself.

iPad case with Bluetooth keyboard and space for notepad and pen 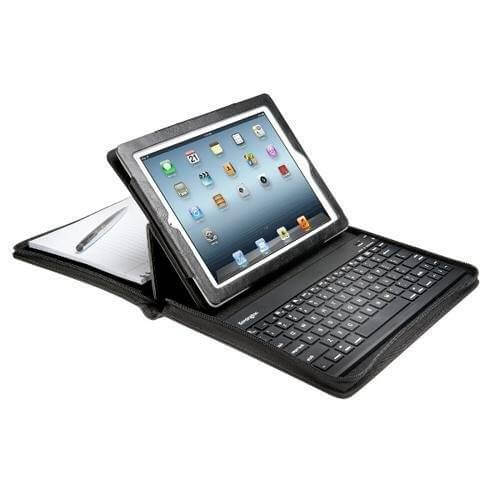 You might not think of yourself as an executive, but artists are the CEO of their own businesses and lives. This case has it all–space for a notepad and stylus (you’ll have to supply your own) as well as a Bluetooth keyboard, all neatly zipped up. Accepts notepads up to 7.5″ x 9″. Cover folds into a stand with viewing angles from 20 to 70 degrees. You can access all ports and cameras with this cool case. I could see Don Draper with one of these, if he’s still in the biz. 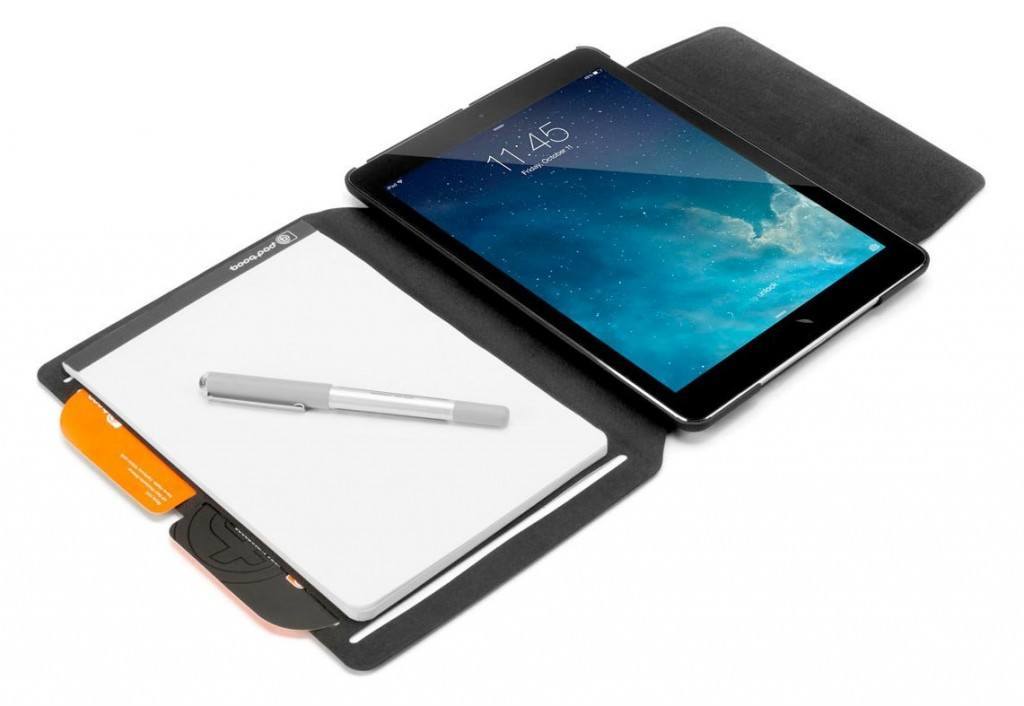 The stylish, versatile Booqpad iPad case with notepad combines an inner, hard, magnetically attached polycarbonate shell with an outer, suedelike folio. It works for both left- and right-handed users (you’re going to have to turn the magnetic case upside-down to switch the notepad to the right side). Ports and cameras remain accessible at all times. The 50-page notebook is included, as are a screen film and cleaning cloth. Unlike the mini version, this has no pen loop. When closed, the notepad gives the iPad added protection. The cover folds to offer two viewing angles and a typing angle. The case can take standard 6 x 9″ refill pads, though the notepad it comes with is slightly smaller. You can find notepad refills here on the Booqpad site.

See this case on Amazon.

iPad cases with a pen holder but no notepad:

Don’t need a notepad with your iPad case, but want to carry your stylus with you? Here are some top choices: 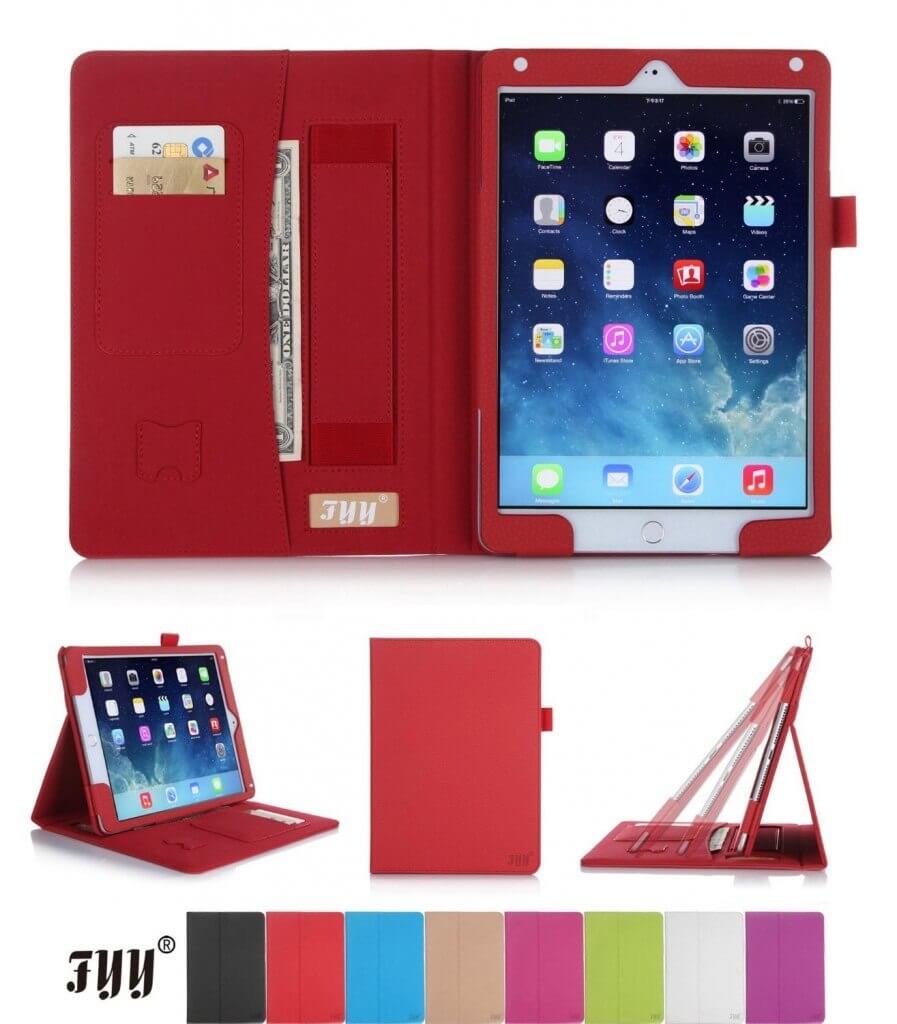 Constructed with PU synthetic leather and featuring a handy exterior pen loop to hold a stylus, this handsome case folds into a stand with slots that give three viewing angles, all landscape orientation. Most of the iPad’s bezel is covered. Anti-skid interior doesn’t slip. It sports pockets for credit or business cards, a smaller pocket for a storage card, a longer pocket for cash or travelers cheques, and a handy hand strap to hold it sturdy. Features a sleep/wake function. All ports and cameras are accessible via carefully aligned cutouts. Shuts with Velcro. Comes in 8 bright colors.

Cons: a little bulky, weighs more than some cases; PU leather doesn’t always stand up to a lot of wear and tear over long periods. 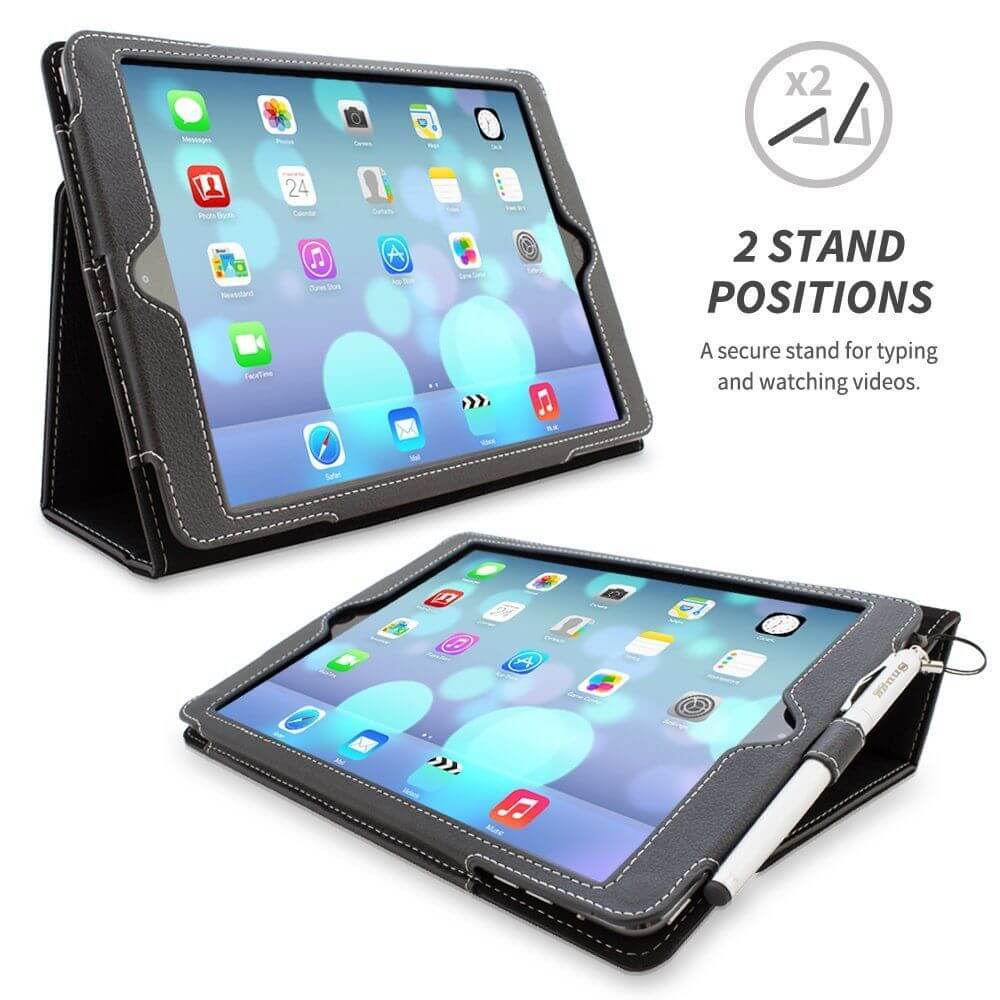 Lifetime guarantee! This folio-style smart cover from Snugg comes in many colors and two patterns, Blue Denim and Digital Camo. It covers the iPad’s bezel but allows access to all ports and cameras. It’s made of Nubuck, which is real leather that has been buffed to resemble suede, but it’s more costly than suede. The workmanship and materials on this are high end. The cover opens into a kickstand that gives you a couple of viewing angles, both landscape.

The hand strap is ideal for using your iPad while standing, whether reading, writing/drawing, or giving a presentation.

The pen loop will keep that stylus from getting lost. Sleep/wake function keeps your iPad well rested.

Cons: Taking photos requires holding the cover flap up because there’s no cutout for the camera on the back. 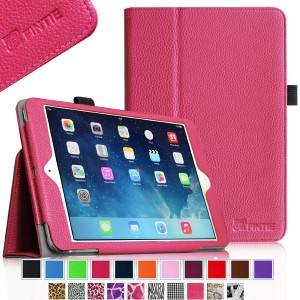 This cute folio-style iPad mini case comes in 20 groovy, bright colors and patterns with appeal for teens, tweens, and anyone who  would love an iPad case with animal print. It has a neat pen loop for a stylus. The case is vegan (all the non-leather ones are) with a sleep-wake function. The cover folds back into a stand in landscape orientation. The inside has soft microfiber lining that won’t scratch your iPad. The sides get protected and the bezel mostly covered. It’s easy to put the iPad into this Fintie case; simply insert it and close the Velcro flap. Though the back is not a polycarbonate shell, it’s quite sturdy and protective.

Cons: a few people had problems with the sleep/wake, but the vast majority did not. 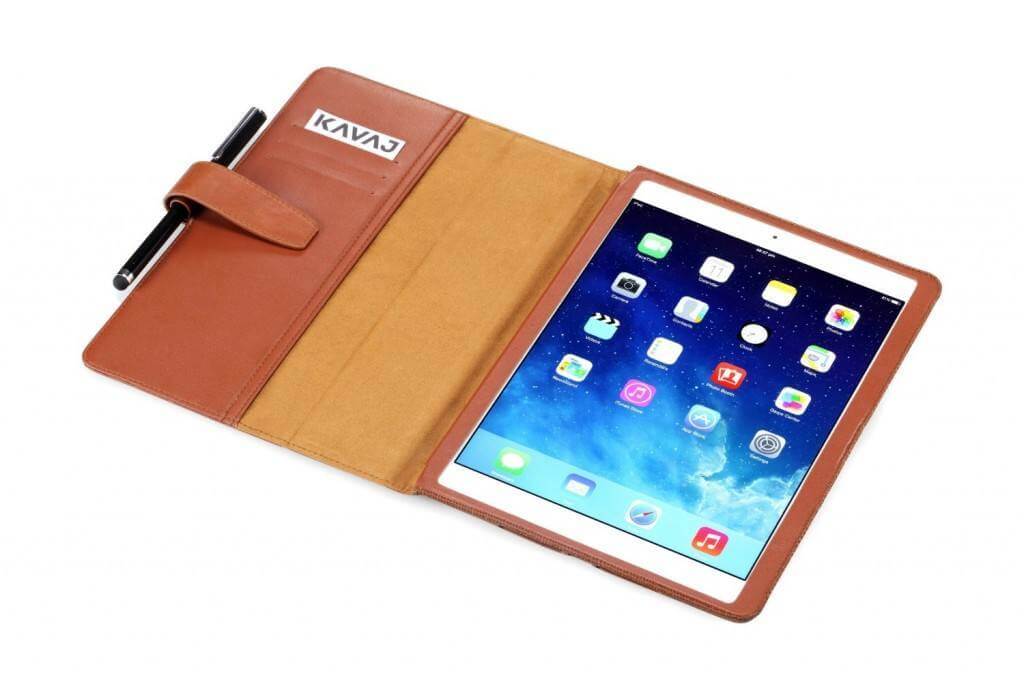 This luxurious case of of London Cognac brown leather lined with soft flannel has a sleep/wake feature and a fancy pen holder. The cover folds out into a stand that offers two landscape viewing positions, one of them quite upright. Best of all, it comes with a Kavaj ink pen that doubles as a stylus. There is a hidden Velcro strap that secures the iPad. A wide interior pocket allows you to stash things made of paper. The case allows some of the iPad bezel to be exposed, which is a nice design feature.

end of Artists take note: an iPad case with notepad and pen holder is a big draw

Read our post on best iPad styluses for art.

Looking for a handmade iPad case? Check out this interview with the artist who makes them, including a link to where you can get one.