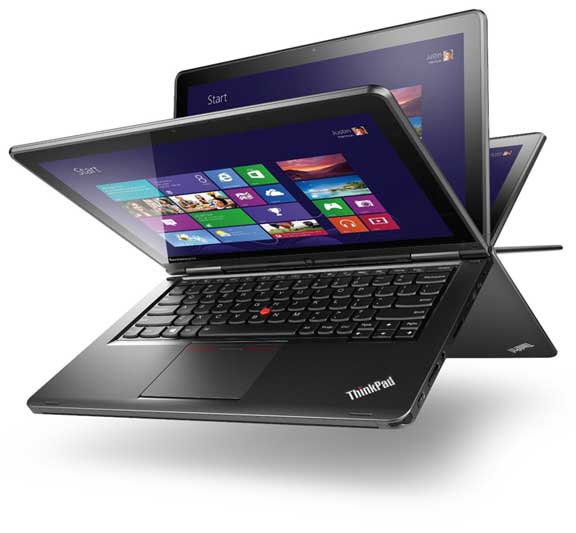 Lenovo ThinkPad Yoga 2 in 1: a business laptop with an arty bent

The Lenovo ThinkPad Yoga 2 in 1 is business in the front, arty when bent back. By appearances, it’s a business machine. “Suits” shuffling spreadsheets would be happy working in Office Suite on this unremarkable-looking black rectangle.

But use it as a tablet, and artists can get real mileage out of it. It’s a definite rival to the Surface Pro 3 (read our Surface Pro 3 review) for creatives who want a real laptop while still getting art features. The ThinkPad Yoga offers a Wacom digitizer with 1,024 levels of pressure sensitivity, and Windows 8.1 allows you to run full programs such as Photoshop as well Metro apps. The screen flips 360 degrees into four positions: laptop, tablet, tablet with stand, and tent.

It’s a laptop, so “handedness” is the same as on any laptop. 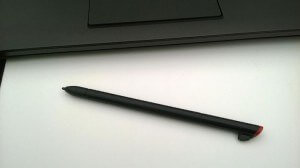 The pen that comes with the ThinkPad Yoga 2 in 1

The pen, which fits into the side chassis, is pretty flimsy and you would probably want some others. Several artists and note-takers recommend the Fujitsu T5000 pen for use because its hard tip meets well with the screen, it has two buttons and an eraser, and is solidly built.

Most tablet PC pens will work with the ThinkPad Yoga. The N-trig pen for Surface Pro 3 will not.

The screen connects to the keyboard via a stiff hinge that feels more durable than a lot of convertibles that swivel instead of bend into the four “poses.” (With other tablet PC laptops, the keyboard gets sandwiched into the middle in tablet mode.) In tablet mode, the keyboard ends up on the back. Its innovative “lift and lock” mechanism makes the keyboard retract and lock, so pressing it by accident while you’re holding the tablet won’t do anything. The trackpad doesn’t lock, so you might click on it if you’re holding the computer in your hand. At 3.5 lbs., you probably won’t hold it in one hand all that much.

I’m nearly always zoomed in when drawing, or else I’m drawing something smaller than the screen, so I tend to forget the screen size while I’m drawing, but aesthetically I prefer the 2:3 aspect ratio. The widescreen can feel awkward when drawing in portrait mode. The 16:9 size has some benefits–it’s the perfect proportions to watch a movie.

At 3.5 lbs., this is portable, but for those of us who feel weighed down by that much, it may be something that you don’t want to carry over your shoulder for long periods. Still, as far as travel, its dimensions are pretty compact, and you can watch it on a plane (even in economy class).

The Corning Gorilla Glass is comes installed with a matte screen protector that is supposed to stay on. While I’m uncertain if removing it would void the warranty, it might, and you should consult the warranty co. if you want to remove it. But I and other artists think it provides a nice “bite” or resistance which benefits drawing.

The screen is not as bright as the Surface Pro 3. The matte surface, being less reflective than glossy gives better visibility when outdoors or near a window. While looking at art on a bright screen is great, while working, keeping the brightness lower not only saves battery, but saves your eyes. But if you like a really bright display, this might not be for you. 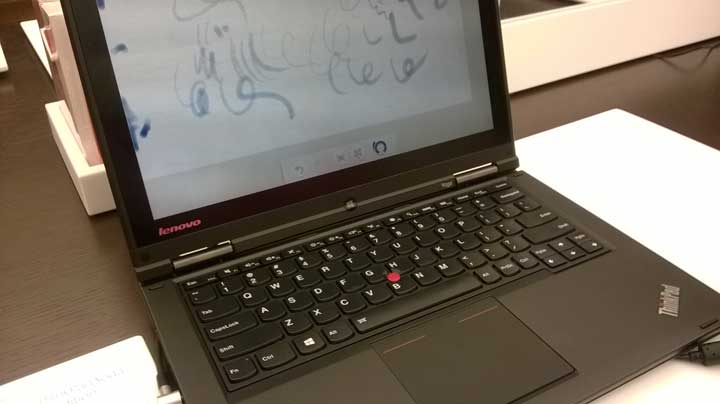 The keyboard is nice and is backlit.

One drawback of the Yoga is that in tablet mode with the keyboard on the back in a locked position, if you’re using Photoshop or some other program with keyboard shortcuts, you’re going to have to open the keyboard to unlock it, or use a Bluetooth keyboard or the onscreen keyboard (these can be a pain when there are key combinations you have to press). It’s an issue with any convertible tablet PC, but with this one it’s a bit more of an issue.

There is some edge jitter, and some parallax (space between the cursor and pen) as with any Wacom digitizer. One Lenovo ThinkPad Yoga 2 in 1 review said that the calibration of multitouch and pen was off. I don’t use multitouch much and prefer to shut it off while using the stylus, but this has 10 points of multitouch and you can do gestures.

Drawing on the Yoga is a much better experience than on my Lenovo ThinkPad X201 tablet, where any stylus I use leaves sort of a thin trail coming off every line (though the computer itself is a workhorse that has been going for four years). So it seems Lenovo has worked out this digitizer issue.

No more ghosts. They also say they have solved previously reported screen ghosting issues as of July 2014, so you can check your manufacture date on the box or bottom of the computer to see if you got an updated one.

The Lenovo ThinkPad Yoga 2 in 1 has a rugged exterior. It weighs about a pound more than the Surface Pro 3 (.36″ thick) and is thicker (.75″ thick), but still under an inch thick.

The Yoga is probably a better choice than a detachable-keyboard tablet like a Surface Pro if you do a lot of typing. Using a Bluetooth keyboard that connects via a hinge, like on the Surface Pro, can lead to issues such as the cursor skipping around, so heavy typing can be a headache. A full laptop is more versatile all around-work machine, though heavier to carry around.

Rear-facing heat vents blow heat into your lap if you hold it in your lap. One Lenovo Yoga 2 in 1 review called it a “heat sink.” But putting any laptop on a soft surface isn’t a good idea.
Can’t use keyboard in tablet mode.
A bit heavy to carry at 3.5 lbs.
Battery life not that great, about 5 hours,  longer if just light use.
Trackpad a bit noisy/flimsy.

Most reviews are really positive. One Lenovo ThinkPad Yoga 2 in 1 review said it was the best laptop the writer had ever used (and they had used a lot), others said though imperfect, said it’s the best of the convertibles, while another complained of the heat blowing into his or her lap. Many praised its solid build. Some prefer the matte screen while others don’t. See more reviews on Amazon.

This is a good, durable overall computer that can last for years and act as a main typing computer as well as nearly a Cintiq. (The difference between 1,024 levels of pressure sensitivity and 2,048 are not perceptible). We think it’s a good choice for those who want to both draw and type, who like a matte screen and don’t mind that the laptop weighs 3.5 lbs. and isn’t exactly a looker. The pressure sensitivity works well.

The Thinkpad Yoga 2 in 1 doesn’t heavily improve on other tablet PC laptops with Wacom digitizers, but it’s one that’s out now, has no major known problems, will receive updates, has plenty of storage, and the 4 positions it yoga-bends into are pretty useful at times. The upside of this is that when you carry a laptop, it’s much more protected than a plain tablet is, you don’t need to buy a fancy case or keyboard, and you can run full programs such as Photoshop.

Read more about the ThinkPad Yoga 2 in 1 on Amazon

See our review of the ThinkPad Yoga 14.

2 thoughts on “Lenovo ThinkPad Yoga 2 in 1 Review: Business in the front, arty when bent back”