This Intuos Art Pen and Touch Small review takes a look at this affordable and very portable tablet. Whether you want to make art, edit photos, or just switch from a mouse or trackpad, this offering from Wacom packs in a lot of useful features. 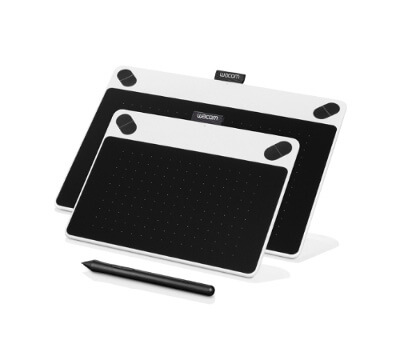 The Intuos Art Pen and Touch is a graphics tablet, or pen tablet, that you attach to your computer via USB. You draw on it and see the image on your computer screen. (Click here for more info on types of tablets).

Note that this is not the “Pro” version, which has more features (such as greater pressure sensitivity and tilt sensitivity) and a higher price. The older version of this tablet was called the Intuos Pen and Touch.

rings to personalize the pen’s look, that match the pen loops

Artpack with Corel Painter Express and other freebies

You can also download drivers from the Wacom site.

The Intuos Art Pen and Touch Small Tablet measures 8.25″ by 6.7″ with an active area of 6″ x 3.7″. Its resolution is 2,540 lines per inch (half that of the Intuos Pro tablets). It has four customizable Express Keys. You can’t see the Express Keys unless the Express Key display is toggled on; it’s a lit-up display.

A handy pen loop on top helps keep the pen from getting lost. Three replacement nibs that come hidden in a compartment in the back of the tablet on top in the center, where the pen loop attaches.
A Wi-fi kit is not included, but can be purchased separately. (See under Optional Accessories at the end of this post). This line of Wacom tablets used to be called Bamboo, so if you are looking for a Wacom Bamboo review, you will see Intuos reviews instead. Bamboo is now Intuos, and the Intuos5 is now the Intuos Pro. Wacom still uses the Bamboo name for a stylus line.

The tablet has multitouch. You can use your hands by using gestures to scroll, rotate, zoom, or flip through image files by tapping, swiping, clicking, and holding. It sports an attractive silver and black design. It attaches to your computer via USB. The USB cable is rather short, but as the USB can be detached from the tablet, you could use a longer USB cable if you choose.

The tablet surface has a rough, papery-like feel, which is nice to draw on because of the paper-like bite, but can wear down nibs. Besides its use for art, it has the ability to function as a finger-powered trackpad on any document, such as a Microsoft Word file. (The most popular tablet among artists is the Intuos Pro Pen and Touch Medium size.)

The small size is a bit small for drawing, and would be pretty useless if you are using multiple monitors and trying to stretch its resolution to cover all of them. You should not use too large a monitor with this tablet–up to 17″ would work well, up to 19″ is possible. The resolution on the regular Intuos line is only half that of the Pro line.

The pressure sensitivity works very well. It’s not as sensitive as tablets with higher amounts of levels, but that doesn’t bother me. I like the scratchy surface. The only problem I find is the size. Because I draw fairly large then shrink down, I find I have to zoom in a lot on my drawings. So I tend to use this more as a companion to other tablets or for smaller drawings. Still, I’m very satisfied with the feel, quality, and sensitivity.

Having a non-screen tablet forces more looseness in drawing and requires practice. When learning, it’s best to keep the tablet straight and directly in front of the computer, and to use it for everything, including word processing, instead of a mouse or trackpad.

Keeping it right in front you will considerably lessen confusion about points on the surface that correspond with your screen. Eventually, muscle memory will set in and you can move the tablet around.

At its small size, thinness and weight of 12.8 oz. it’s easy to carry around. I recommend getting a case to protect it; it can fit into any laptop case.

The black Intuos Pen matches the tablet. Its 1,024 levels of pressure sensitivity, while only half of the 2,048 the Pro line offers, are plenty. The battery-free pen has an eraser, which does not have pressure sensitivity. The pen is ergonomic for a comfortable hold. There are two programmable switches on the side. You have to click the buttons when the pen is within half an inch of the tablet for the buttons to work.

Corel Painter Essentials comes bundled with the tablet. Here are some other free or inexpensive suggestions:

Autodesk Sketchbook Express is a free art program for Mac or Windows (not an app) that is a bit limited. It is adapted for tablets and makes use of gestures in its menus. Pressing the space bar opens up a “puck” that lets you navigate around the canvas. There are preset tools, but you can’t customize them a whole lot as you can the full version. It lets you draw perfect shapes such as squares and circles. There are 6 layers, which, depending how you work, may be fine or not enough. The full program, which costs under $100, has unlimited layers.

I like to use the above programs in conjunction with Photoshop or the much less expensive Photoshop Elements. Though you can do a lot with ArtRage, you might still want features such as Save to Web (which shrinks file size) and to not create artwork as a specific ArtRage file which must then be exported as another file type.

The tablet is reversible, so it’s fine whether you are right-handed or left-handed.

With gestures, the tablet can act like a trackpad, or perhaps a mousepad with your hand becoming a mouse. Though the same tablet without touch is a bit cheaper, it’s worth it to get the touch capability.

However, the touch does have some drawbacks. If your hand accidentally brushes against the tablet, the tablet may interpret it as a gesture. Be a bit careful to not put your fingers too close together–if the gesture calls for three fingers, having all your fingers touching each other be interpreted as one finger.

It’s kind of like learning to drive a stick shift–well, easier than that. If the pen is touching or hovering over the tablet, touch will be disabled. Touch can also be shut off via an Express Key.

If you don’t want multitouch at all, the only Intuos option is the Intuos Draw Creative Pen Tablet Small, the simplest of the Intuos line. It has the same 1,024 levels of pressure sensitivity) and all else about the tablet is the same, but there’s no multitouch.

The pen has no eraser, but you can easily use the eraser tool in your art program instead. You don’t need multitouch to use this tablet as a mouse replacement; you can select text with the stylus just as with a mouse, through a series of clicks or by clicking and dragging. 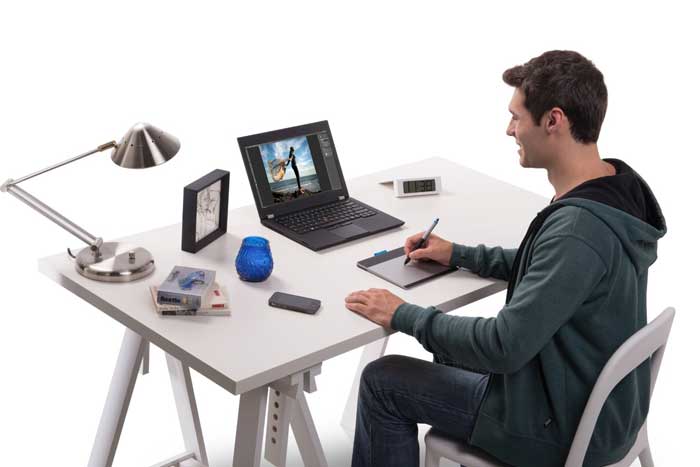 This photo actually shows the older Intuos Small, which is about the same size.

This pen tablet is popular among users, who praise its response time and say they get much more work done than with just a mouse or trackpad.

Many report switching from mouse to pen helped their repetitive strain injuries, though if someone is suffering from RSI from drawing already, it can exacerbate it. In general, wrist injuries are common, so a stylus is much less likely to cause or aggravate injuries to the wrist than clicking a mouse would.

You may have trouble finding the replacement nibs. Wacom should try to do a better job of showing them.

USB cable is detachable from the tablet, so you can use one that has a longer cord if you want Great response time.

The tablet and pen may be a bit cramped for large hands. Some complain about the Wacom Web site registration process. Others find the tablet difficult to use. You do not have to use the Express Keys or gestures, they are there for your convenience.

Once you’ve tried an Intuos Pro tablet with 2,048 levels of pressure, you do feel the difference.

Nibs can wear down quickly due to the textured surface of the tablet.

Try using a screen protector (see link below, under Optional Accessories) or even just a sheet of regular paper over the tablet.

The tablet is quite small and would be better to use with a monitor of no larger than 17″, 19″ at the most. Because of its size, moving the pen, mouse, or hand on the monitor even a little can move the cursor quite a lot.

I find small tablets best for basic photo editing or coloring small drawings that I’ve scanned in or created on a larger tablet. It’s not that easy to draw a larger picture on such a small tablet; you have to keep zooming and panning.

I end up zooming and panning even on my Cintiq, but most of my drawings are not much larger than the Cintiq 13HD screen, so some of the zooming is just because I like to do that with detailed areas.

The Intuos Art Pen & Touch small tablet is fine for doing small drawings that don’t require a lot of hand movement, as you can feel cramped on a small tablet both mentally and physically. It’s more ergonomic to use a larger tablet. This one is OK for drawing, and excellent for crafts, basic photo editing, and scrapbooking.

In my opinion, the best size for art is the Medium, which is also the most popular of the Wacom pen tablets among creative professionals. This size tablet is also find if you want to use it and the pen as a mousepad replacement. Multitouch gestures let you select text.

The Small it’s a good tablet for beginners who aren’t sure they’re going to commit to digital art. It’s fine for lots of other uses, too, but I wouldn’t recommend it for professional artists because it’s too small; it can be a good, portable backup tablet.

Looking for the Pro version? Here’s the Amazon page for the Intuos Pro Pen and Touch Small.

And here’s our review of the Intuos Medium Pro–similar to the small but a bit larger.

See our review of the Wacom Intuos Draw.

If you find the USB cord to be too short, we recommend this USB extension as a simple solution.

Read our introductory article about tablets.

You’ll have less cord clutter with the wireless kit.