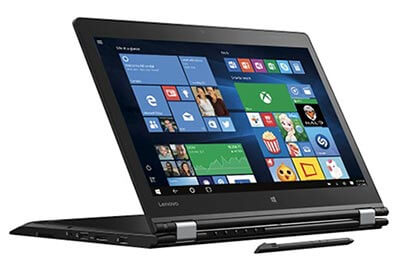 It is the same as the Lenovo Yoga 460, so you could read this as a Yoga 460 review as well. The 460 actually does have an i7 model. That listing is lacking in further detail.

As of April, 2016: the Yoga 460 now on the Lenovo site does not have the discrete (separate) graphics card, only integrated graphics. That 460 features up to a 6th-gen processor.

This Lenovo Yoga 14 has an i5 processor, powerful enough to run Photoshop and all the Adobe programs. The dedicated graphics card offers a speed boost, and the Skylake i5 is the equivalent of an i7 from the previous generation. That being said, it would be nice if there were an i7 model.

The RAM and SSD on this ThinkPad Yoga are both upgradeable, though there is just one RAM slot, so you can take out the 8GB stick and put in a 16.

Thanks to the dedicated graphics, you’ll be able to do moderate gaming and video editing, and get better results in Photoshop operations that use a lot of rendering, such as filters. This is still not a heavy-duty gaming monster machine, but a general overall Ultrabook with wide capabilities.

While it’s HD, 1920 x 1080p is not that high-res compared to a lot of computers coming out. However, the fact that it’s not 4K makes battery life last longer. The resolution is fine for looking at artwork, reading text, and watching video. The colors are clear and bright. It’s not overly glossy. The IPA screen supplies good viewing angles.

You can add two more displays, such as a monitor or TV to it via the HDMI and miniDisplayPort.

At 3.85 lbs., it’s not bad to carry around for short periods, but feels heavy holding in one hand or resting on the lap.

The pen is not miniature or very short, but it’s skinny and not optimal to draw or write with for long periods. You can purchase a  more normal-sized pen (both thicker and longer) if you prefer. This pen needs a battery, but the one included with the tablet PC does not, because it charges from the computer.

Wacom ES has excellent accuracy and pressure sensitivity, second only to Wacom EMR in terms of sensitivity (ES requires a little more force to get a mark). Its accuracy exceeds EMR, with no parallax and no jitter around the edges as Wacom EMR gets. I did notice a little more jitter when drawing slow lines than with traditional EMR. Palm rejection works well. The pressure curve is smooth, no blobs, no little “tails.” You will not be able to use a traditional EMR pen on this.

If you want a thicker pen, you can buy the ThinkPad Pro Pen, a Wacom AES active capacitive pen with 2,048 levels of pressure sensitivity that takes an AAAA battery. 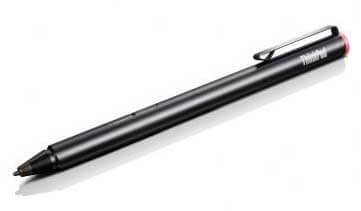 The backlit, chiclet-style keyboard is comfortable and easy to type on. If you type a lot, but also want an art tablet, this is a good choice. The keyboard is Lift and Lock, so when you have it folded into Tablet mode, the frame rises around the keys and the keyboard is disabled. So you won’t be able to reach back for keyboard shortcuts. Instead, you could use an external keyboard, either Bluetooth or USB. The ThinkPad red TrackPoint nub lets you move the cursor long distances with a small finger movement. Its sporelike top with tiny bumps gives your fingertip traction (and a little massage).

Most users have been very happy with this computer, feeling it’s a great value with its many features, bright screen, speed, and build quality. A few got ones with glitches but managed to address them. Aside from irregular complaints, this has been a successful release.  I haven’t seen any complaints about overheating or battery problems, though some wish the battery lasted longer.

solid, durable, well-built
dedicated graphics
nice keyboard
pen is included and fits into a slot in the body
value

on the heavy side for drawing
single RAM slot (upgradeable, but would be nice if there were two slots)
pen that comes with it is thin
some have reported touchscreen glitches 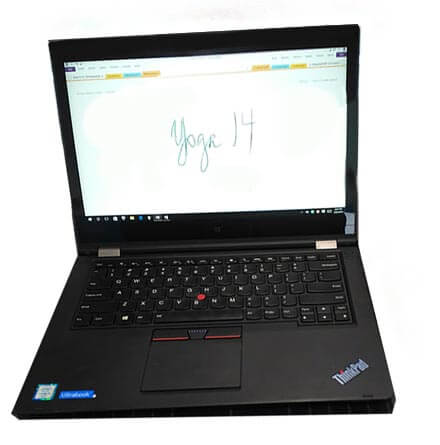 The Verdict
This new Lenovo Yoga 14 review is a drawing-hand thumb’s up. It doesn’t have the issues of the last release, which included some that shipped with bad batteries. It’s a solid, portable, and versatile machine.

Weird facts: did you know the ThinkPad’s design was inspired by the Japanese Bento box? This post on Lenovo’s blog explains.

I think the simple design is one of the main appeals of the ThinkPad. The box shape offers protection. The ThinkPad has a utilitarian look. It’s easy to not notice it much at first, but the details show a great deal of thought, and the many poses add new uses. You can also open it flat if you wish to draw using the keyboard shortcuts without a spare keyboard.

The Yogas have more Penabled devices than anyplace else and continue to offer them.

This is a great choice for an art tablet that’s an all-around tablet. It’s not super duper powerful, but powerful enough to run Photoshop and do moderate gaming. You can add more RAM and a faster hard drive. This computer can be your whole office and art studio.

In some ways I prefer the previous ThinkPad Yoga 14, which had a discrete GPU and superior color gamut. This is one is more of a general-use machine that’s suitable for drawing.