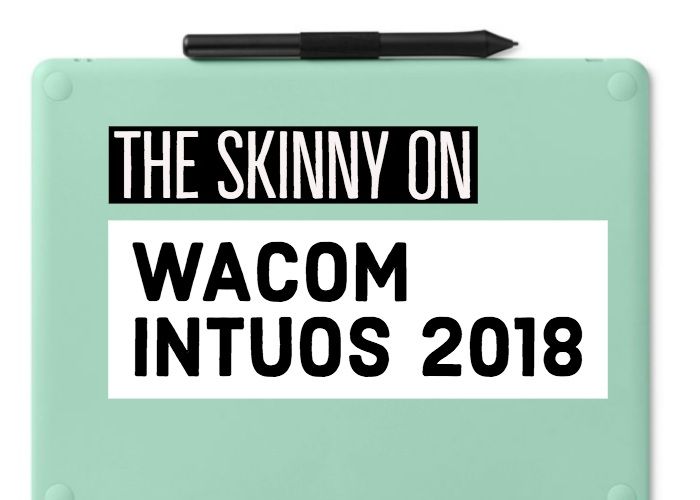 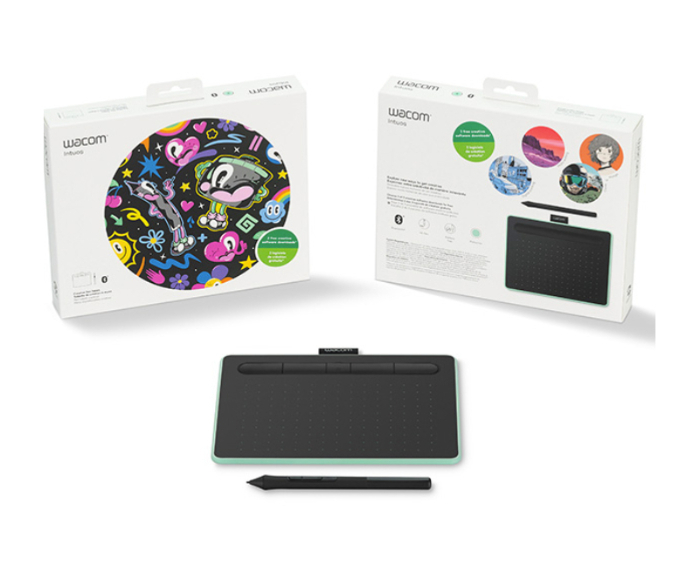 A new Wacom Intuos 2018 is here! The Wacom Intuos tablet design, up to now, has not been changed since the old days of 2015. (The Intuos line was formerly known as Bamboo). We’ll take a look at the difference between new and old and whether the new one is an upgrade or something that goes more… sideways.

In the last few years most art tablets, including tablet PCs, have gone far beyond 1,024 levels of pressure. The Intuos (non-Pro version) was starting to feel like a dinosaur in that respect. The new Intuos 2018  has 4,096 levels, plus a number of other changes to design and functionality. Most of these are for the better.

However, there is one major change that’s not great. Wacom has removed multitouch from the new Intuos. Only the Intuos Pro and older Pen and Touch models (and all Cintiqs) still have it. More on this below.

See our article on choosing an Intuos

The active area takes up a greater percentage of the tablet, but the actual active area hasn’t changed–it just now goes almost to the edge of the surface.

There are still four customizable, application-specific Express Keys, even though their arrangement has been changed.

The new Intuoses, like the old one, come in only Small and Medium.

They still come bundled with drawing programs at no additional cost.

The pen’s reading speed (PPS) and tablet resolution (LPI) are still the same.

There’s still a tether so you can lock the tablet.

There are now 4,096 levels of pressure sensitivity. This way, there’s not such a huge difference from the Intuos Pro and Cintiqs, which have 8,192.

Wireless use with Bluetooth

This time, the Intuoses have Bluetooth. You no longer need to buy the optional Wi-fi kit to use your Intuos wirelessly. Only one model, the small, more affordable  Intuos S, does not have Bluetooth. All come with a USB cable so you can use them wired.

Newer: The new Intuos comes bundled with up to 3 programs: Currently, they are: Corel Painter Essentials 6, Corel Aftershot 3, and Clip Studio Paint Pro. With the Medium size, you get all three. With the Small with Bluetooth, you choose two. With the least expensive new Intuos, the Small without Bluetooth, you get just one–a choice between Corel Painter Essentials 3 or Corel Aftershot 3.S

With the older Art Pen and Touch Wacom offered the same tablets with different software, some of which were programs in trial versions or were free anyway. I prefer the new way.

Older: The older Intuoses have different names according to what software they’re bundled with. I always found this a bit confusing. The customer may not even realize the tablets are the same.

The pen is now called the Wacom Pen 4K (LP-1100K). It looks similar to the old Intuos Pen, but has 4096 pressure levels, or four times its predecessor. (For some reason, Wacom skips some multiples; it skipped 2048 in this new-generation Intuos ands skipped 4096 in the Pro tablets, going from 1024 to 8192). Now the nibs are stored in the barrel. It comes with a nib in the pen plus 3 replacement nibs. The compatible Felt and Flex nibs also will fit in the barrel. The Pen Ring that was sometimes available is gone. 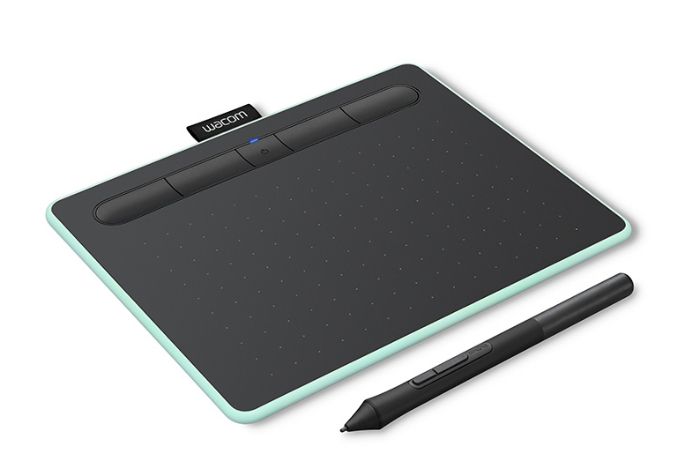 Now, to keep the pen from wandering away, there’s a tray, an indent in the top of the tablet that will keep your pen in sight and not rolling off the table like a meatball off spaghetti.

Another difference is the footprint and weight. The new Intuos 2018 is sleeker, taking up less space on the desk, and it’s a bit thinner, about the thickness of a smartphone. The models are all a bit lighter as well.

The top part of the Intuos is about an inch smaller than before. The pen tray doubles as the Express Keys. The pen, when lying in the tray, is sitting over the keys. By redesigning the buttons, Wacom saved some space.

Formerly, there was only the pen loop, which was rather tight and a bit annoying. The pen loop is still there, but you can now use it to carry the pen with the tablet and not as way to keep the pen from rollin’.

The tablet is also thinner, with the top part being thicker than the bottom.  It’s now 5 mm in the lower part and 8.5 mm in the upper part. Slender, man. 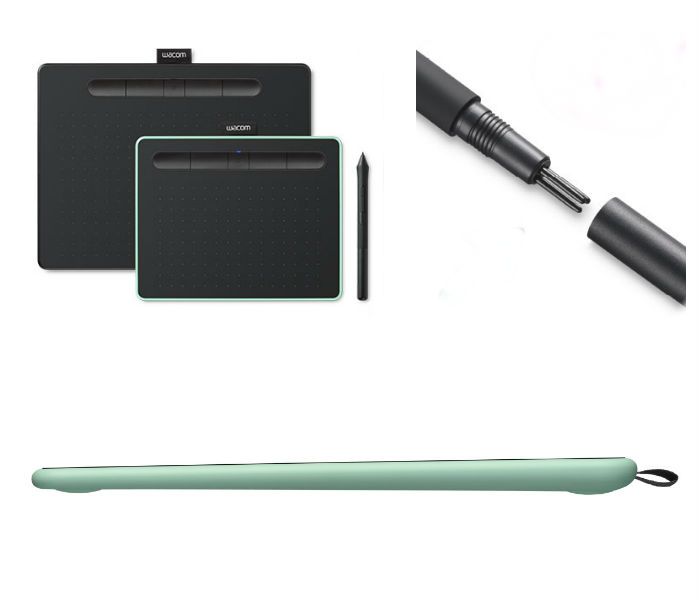 This design, while not in itself a reason to get a new Intuos, uses less plastic and  is smarter and better than the old one.

To keep the price down, Wacom has removed the multitouch feature. Yes, I was shocked too,You’ll have to buy the pricier Intuos Pro to get touch.

(See our Wacom Pen and Touch review about the 2015 models, which as of this writing are still for sale though no longer are on the Wacom site).

One unfortunate result of taking away touch was it was a nice feature for kids, who could use it to finger paint. It also made it so if you lost the pen, you could use your finger if you had to. Now you’ll have to use your mouse if you can’t find the pen.

Without touch, you don’t have gestures, which allow you to pan, zoom, and navigate. You’ll have to use the pen and your art software commands, or keyboard commands, or Express Keys.

Touch made it possible to use the tablet as a trackpad. And, you could take advantage of the growing amount of touch commands in Adobe and other software–commands that, arguably, are mostly used by professionals.

Handwringing aside, touch isn’t needed, it’s just useful. Wacom had almost branded themselves by offering it since it was only NOT available on one art tablet, the down-to-basics Intuos Draw.

Ironically, it’s hard to get a tablet PC that does NOT have a touchscreen.

Is it worth upgrading to the new Intuos?

The levels of pressure, as I often remind people, don’t matter all that much. I can sense the difference in smoothness between 1024 and 2048, but not after that. Additional levels do offer more accuracy, but we’re talking millimeters. For most people, 1,024 levels are enough.

Bluetooth is a really nice feature. Some reported loose ports for the USB in the old Intuos, so it’s a good thing that you can stop using the USB. You’re saving money by not having to buy the Wi-fi kit. Working wirelessly, you can now put the computer at more of a distance away if you wish.

Storing extra nibs inside the pen stand is convenient, since you might not always keep the pen stand with you. This is another smart design move.

The new tablets come in black, pistachio, and berry, which may make artists run to the refrigerator instead of sitting down to work. (Berry, a vibrant pink, is only available in certain markets). Pistachio is an aqua color.

If you have a Pen and Touch, you’ll probably be fine keeping it. It’s an individual decision. Intuoses are solidly built and can last for years.

Wacom’s redefining of multitouch as a Pro feature feels a bit off. It seems strictly a budgetary decision, not one that should affect your perception of how useful or “professional” multitouch is. It’s useful if you use it; if you don’t use it you probably won’t miss it. Non-professionals are likely to get some use out of, it but it’s true that that use may be limited. Pros find it important in saving time, as they can master a workflow that uses Express Keys and gestures.

If you’re puzzling over it, ask yourself whether you want to just draw, more like in real life, or also use gestures and use the tablet as a trackpad with your hand. Some Adobe Creative Suite program features are designed to work with Touch.