Wacom and Microsoft partner to make pens with 4,096 pressure levels

Microsoft has inked a deal with Wacom to work together to make Wacom AES and Microsoft pens cross-compatible with Microsoft devices. These “dual protocol pens” will be made by  Wacom and work on Windows 10 devices. Some details have been released at the WinHEC (Windows Hardware Engineering Conference) in Shenzhen.

Wacom’s AES, short for Active Electrostatic, has replaced Wacom’s traditional EMR in Wacom Penabled tablet PCs, such as the ThinkPad Yoga 14 (Wacom’s Cintiqs still have EMR). The new pens will be for AES and Microsoft tablets across devices from large to small. Microsoft now uses N-trig digitizers in its own Surface line, and Vaio is using the N-trig DuoSense pen on the review of the Z Canvas 2-in-1 tablet PC.

The devices would sport a 240Hz pen speed and 120Hz touch speed.

The new Wacom pens, called G13 or Generation 13, will feature tilt sensitivity to offer natural drawing angles. Right now, tilt is not available on most Penabled tablet PCs, nor on the Microsoft Surface line. (The Enhanced Samsung used on its Wacom-Penabled pen tablets currently offer some flexibility with tilt.)

The new pens’ 4,096 levels of pressure sensitivity is unprecedented–feels like just yesterday when MS was Micro-splaining to us that 256 levels of the Surface Pro 3 was perfectly fine?

I doubt the 4,096 levels will be a world-changing difference from 2,048, and indeed, 256 wasn’t too bad. But each increase seems to bring a slightly smoother pressure curve.

Other advances including more universal implementation of simultaneous finger and touch input, to the joy of finger-painters everywhere.

Palm rejection, lower latency, and more responsive trackpads are also listed in the directives discussed in the slideshow put on at the WinHEC conference.

If you’d like to see all the WinHEC presentation slides, they are available on this technically oriented Microsoft blog.

Wacom will create and make the Windows-Ink capable pens. From then on, Wacom’s pens will have both AES and Microsoft N-trig-based tech. N-trig is currently used in the Surface line.

Companies that make pens and touch controllers are expected to jump onto the bandwagon, including Wacom, Sunwoda, and APS on the pen side, and, on the controller side, Wacom, Synaptics, Goodix, Elan, EETI, and Atmel. 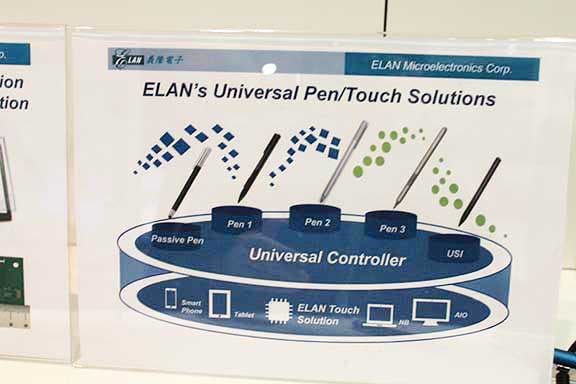 Elan is playing a role in the push toward universal digital inking solutions. Photo: Tablets for Artists 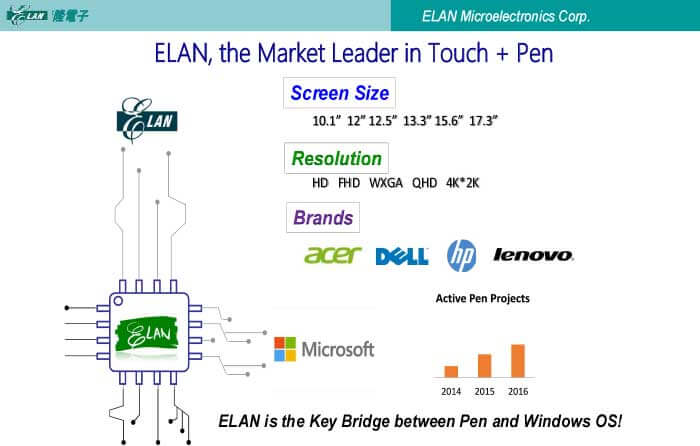 It’s all a group effort. Slide from WinHEC.

As you can see below, Microsft aims its pen tablets at all ages and people in varying professions. Who doesn’t need a pen? 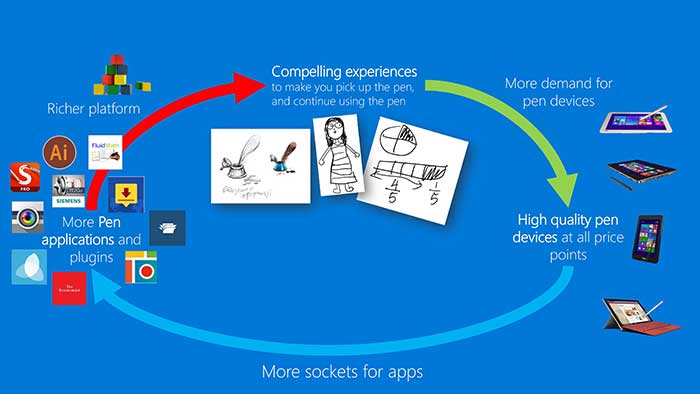 Now, lest we be naive, these companies aren’t doing all this ONLY to make life easier for the artistically inclined. They wish to increase the population of pen users, and it’s working. The first Microsoft Tablet PCs, back in 2001, were a big flop with the public, though embraced by artists who saw their potential. It took Apple’s iPad to bring the gadget-using public into the tablet fold.

The more pencil and paperlike digital pens can get, the more people will use them, or so the company’s reasoning goes. And they seem to be right–pen tablets are expected to double in 2015 to 20 million, up from 10 million in 2015.

Microsoft may be going universal, but it’s not abandoning the N-trig tech that powers its popular Surface tablets. N-trig is an Israeli company that created this tech; Microsoft purchased the company in 2015 for  $30 million. N-trig tech will still be present in the “DNA” of the new pens. But Wacom, with its many devices and long history. will be the one creating and manufacturing the new pens, using the Microsoft Pen Protocol under Wacom’s UPF (Universal Pen Framework).

There will be a firmware update for older Wacom digitizers that are G11 and G12. How that will work remains to be seen.

The upshot is that it’s all getting closer to the Apple Pencil, and to the modest wooden pencil as well. According to Wacom President & CEO Masahiko Yamada, “Supporting multiple protocols makes our pen incredibly fast and easy for people to write intelligent notes, be creative, and get productive when using Windows Ink on their Windows 10 devices…”

Echoing this message of harmony, Kevin Gallo, corporate VP of MS’s Windows Developer Platform, “Windows Ink makes it easy for people to turn their thoughts into actions…. People that use pens with their Windows 10 devices are happier, more engaged, more creative, and productive.”

I’m including some photos from CES showing the move toward universality. 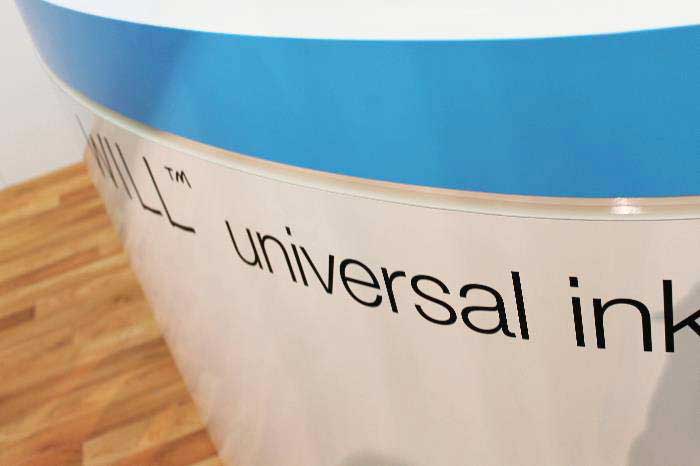 This new effort coincides with a push by Wacom in the digital-inking space. Wacom showed off its inking initiative during the Consumer Electronics Show (CES) earlier this year with these funky digital crayons, each with a unique ID, that allow worldwide collaboration with consistent colors. (These were just for show and I don’t know of any plans by the company to sell them, unfortunately.)

Masahiko Yamada also mentioned digital stationery as a product to develop. The Digital Stationery Consortium began on Jan. 7, 2016 and will be implemented across a range of business sectors. 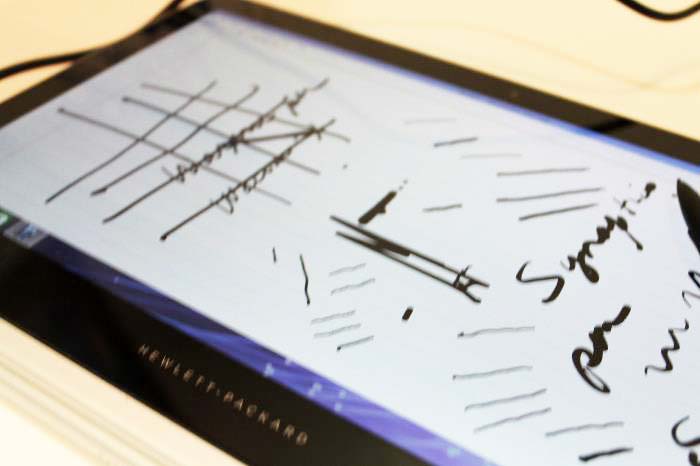 A universal digitizer? This tablet, displayed at CES, allows the use of different types of pen on the same tablet. Photo: Tablets for Artists

I don’t this is going to affect Wacom EMR, which is still used in the Intuos, Cintiq, and some tablet PCs. Please check our post categories to see which tablets we’ve reviewed have which type of digitizer.

The word “universal” is music to my ears. It’s just so much easier. Chargers, pens, and other accessories are so much more accessible when you don’t need a different one for every device.

A reminder: the free upgrade to Windows 10 is ending on July 29, 2016, and some of these changes are going to be included in the next Win10 update, so if you’re holding back, you might want to take the plunge to Windows 10.

With this announcement of a Microsoft-Wacom pen pal pact, it looks like late 2016 has holiday cheer in store for digital artists.

end of Wacom and Microsoft: Pen pals at last