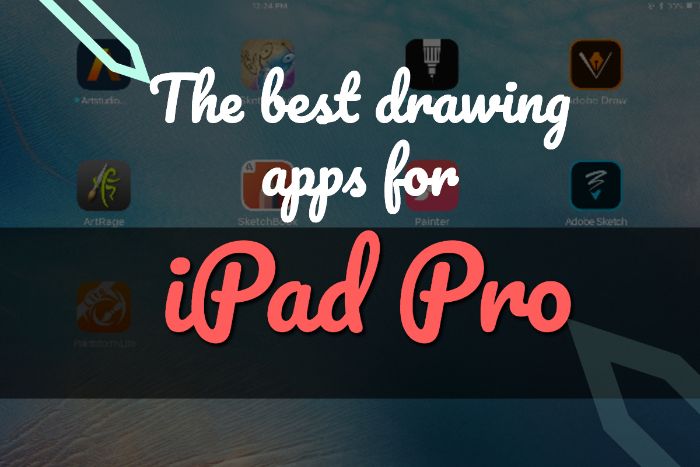 What are the best drawing apps for iPad Pro? Artists love the iPad Pro, and so do the app developers who cater to them. I tried a whole bunch and picked these–it’s a pretty long list, because not every app will appeal to everyone.

Mobile art apps of 2017 and 2018 offer advanced features once found only in desktop apps. Some have Android and desktop Mac and/or PC versions as well. iOS 11 has made it easier to transfer files from app to app, in case one doesn’t do something that another does.

Most of the best art apps for iPad Pro strongly integrate the Apple Pencil and  multitouch gestures. Most also support other drawing styluses, including Adonit and Wacom. (See the top drawing styluses for iPad and Android). These iOS apps also work on regular iPad and iPhone.

What should you look for in a mobile art app?

Mobile art apps run a gamut, with some strongly enabling drafting or constructing and including features like  perspective grids, ellipses, rulers, and shapes, while others focus more on painterly effects,  brushes, customizations. And some have all of these. Do you need comic panels? Shapes? Perspective? 3D? Good text tools? Vector? Realistic oil brushes? Replay? Most people will probably want a good pencil and pen tool, the ability for high-res paintings, layers, and easy sharing.

Links go to the app’s Web sites, which you can find links to the various app versions including AppStore, Google Play Store, and desktop. 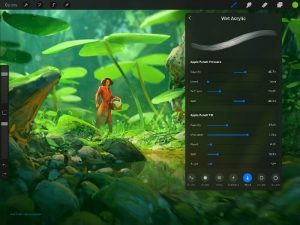 Procreate is probably the most popular app with professional iPad Pro artists, and comes only on iOS. It has a stellar array of brushes, or make your own from a library of shapes and textures. You can also upload textures or use brushes made by other users. The app also cleverly uses iOS 11 by letting you do timesaving tasks such as dragging a custom brush off the Web or emailing a layer.

You can use huge canvases and unlimited layers, adjust Apple Pencil settings, and record and play back paintings.  Some find it easy to learn while others may not find it that intuitive. If your needs are only light drawing and painting, then Procreate may be like splitting peas with a sledgehammer.

The current version lacks a ruler and grid, and doesn’t have vector brushes, symmetry, ellipses, or an easy way to make paper textures. 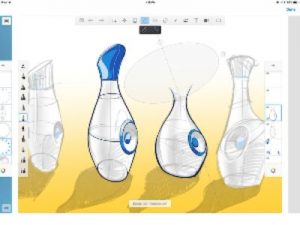 Autodesk Sketchbook apps’ appeal is an easy, intuitive interface combined with a lot of power. Sketchbook by Autodesk has many brush textures, and you can create your own. Its Copic marker library makes it perfect for manga. It has, radial symmetry (perfect for mandalas!), guides, and ellipses to help with perspective.

Drawing on the iPad with Sketchbook Pro is nice and uncluttered, as you can hide the UI. The free version, Sketchbook, gives you limited tools and just a few layers, while Pro, which is by annual subscription, adds a lot more. It’s a very simple app to use, without much learning curve. It’s an excellent drawing app for beginners.

Sketchbook doesn’t have things like wet paper, blending, or specific simulation of types of paint. The selection tools are there, but they could be more intuitive. 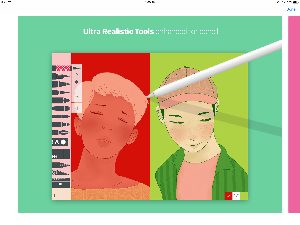 Tayasui Sketches/Sketches Pro has a pleasant, airy feeling the company describes as Zen.  Its interface is wordless, so language isn’t a barrier. This is a fun and easy app popular among illustrators.

Tayasui’s UI keeps brushes and tools out in the open. You can change the icons to look more like real tools. You can set the tools to remember color. There’s a cool pattern brush that includes a set delicate hand-drawn patterns. The free version is great for sketching (you get the Rotring Pen and a handful of other brushes that emulate real-world tools, such as Acrylic Brush.) Supports gestures, Apple Pencil, and other Bluetooth styluses. It’s a nice, simple and easy drawing experience. Though it’s not the most extensive app, it’s smooth and works great. 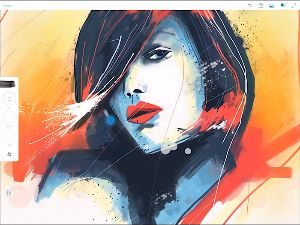 Adobe Photoshop Sketch  appears minimal at first glance, showing just 5 brushes–pencil, marker, watercolor, ink, and acrylic. But each one has lots of settings like desktop Photoshop, including pressure, flow, size, and velocity. Tap on the “plus” and a plethora of new brushes appear, including Kyle T. Webster brushes. The app also as layers, shapes, grids,  a wide variety of premade formats, and the ability to save to the Adobe Creative Cloud. You can a timelapse, share, and send to Behance. Adobe Photoshop Sketch manages to offer a lot while still keeping it simple and intuitive. This app has grown into one of the best free art apps for Apple Pencil and iOS out there.

This is one of the best drawing apps for iPad Pro if you’re just starting but want expressive brush options and are ready to tackle some more meaty features. 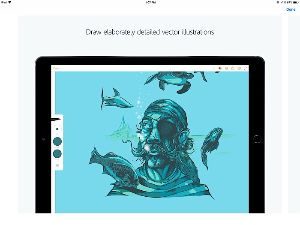 Adobe Illustrator Draw is a powerful vector app. No more fussing with Bezier curves and handles, you can just take your Apple Pencil and have completely natural control, turning out tapered, pressure-sensitive lines. Or just finger paint.

You can also do things like upload your own textures which, zap, get turned into vectors. So your art is all fully scalable. You can even export your files over to the desktop version of Illustrator, layers included. Adobe Illustrator Draw can streamline your workflow as an illustrator. You’ll need to have an Adobe Creative Cloud account to use it.

ArtRage a fine art painting app that lets you express yourself in truly painterly ways. It’s got brushes that emulate oil, impasto, pastels, rollers, pencil, crayon, airbrush, eraser, even glitter. You can even squeeze paint out of a tube. You can use layers, different paper textures, view brushes in a close-up window, and export to png, jpg, or the native ptg app, but not to psd. The app focuses on being close to painting in real life. One interesting thing this artist is doing in ArtRage is using the tools to hand-transform photos into paintings complete with brushstrokes. ArtRage settings for Apple Pencil and Bluetooth styluses.

The mobile version lacks selection tools, though, so you’ll need  a workaround.

Paid. Very easy to use.

The app aims to distinguish itself, and it does. Popular with Android users, there’s also an iOS version. The UI is nearly invisible, you use a pulldown menu. There are  pattern tools–Path, Symmetry, Quilt, and Tile as well as brush masking for filters. There are built-in paper textures, and brushes act on them as they would in the real world–how cool is that? Also, you can paint with a brush on the canvas and it picks up the color. Infinite Painter also has features borrowed from Photoshop, like Clipping Masks and Curves. It also has canvas textures, symmetry, and ellipses. It lets you import photos from free photo site Pixabay, so you can bring an image in as inspiration, or use one on your iPad.

Infinite Painter does not have  specific customizations for Apple Pencil or other styluses, nor does it have PSD import or replay, but we still think it’s one of the best free drawing apps for iPad and a good free alternative to Procreate–most of the free ones do not do as much as this one. 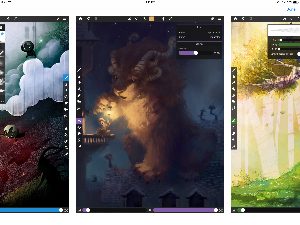 SketchClub is a fun, popular, sophisticated, and cheap iPad art app. I has a large, engaged community you can share your work with, as well as community-made brushes. It even has its own zine. It’s got plenty of advanced features, including Smudge and vector tools; bristle brushes; layer transform, customizable color theme, a fast brush and compositing engine, gif export and up to 64 layers. It has autosave and HD canvas recording and playback. Its inking and coloring panels are perfect for creating comics. It even lets you upload T-shirt designs directly to Snaptee.  Sketch Club is about the users. 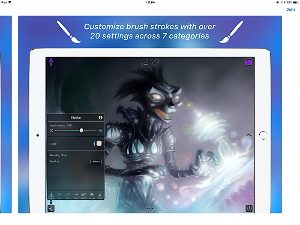 Inspire Pro is something like Painter and ArtRage, with oil paint, airbrushes, markers. It’s got a wide array of brushes, divided by media into sets.  Like Procreate, you can make dual-texture brushes from shapes and textures. Inspire Pro has extensive customization of the UI and brush strokes. It’s designed as an Apple Pencil drawing app in that it lets you customize settings for that and other styluses as well.  If you want brushes that simulate traditional media plus the ability to make extensive customizations, then this is for you.

Alas, Inspire Pro allows only one layer, so that may be an issue, bringing the experience closer to real-world painting. After buying it, there are still in-app purchases. 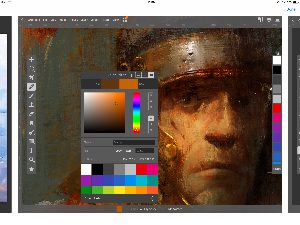 The update of the old ArtStudio is packed with features that utilize the Apple Pencil in this new version. The company is on its way to adding support for other styluses but right now it’s one of the best Apple Pencil apps in 2017. ArtStudio Pro lets you create stunning art. There are 450 brushes (150 of them free). There are also 40 filters, such as Gaussian Blur, Render Clouds, and Elastify. So you can edit photos and utilize text: it’s got 150 fonts and support for TTF fonts that you can add. If you have the old ArtStudio, you can upgrade to this one. 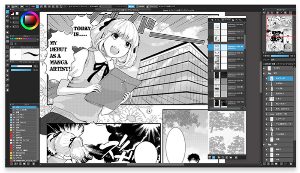 Medibang for iPad has almost as much going for it as its desktop version, and both are free. It offers so much it’s kind of dizzying. Similar to Paint Tool SAI, Medibang is a great app for comics and cartooning, since it lets you easily make panels of different shapes and layouts. There are also free comic book fonts. There’s a library of tones, word balloons, and other goodies. It has interesting pens like Symmetry, Turnip, and Sumi. You can also do layer masks and customize shortcuts. There’s autobackup in case of crashes. Supports Apple, Wacom, and Adonit styluses (remember to turn on pen pressure). It’s a fun ride. Users can create an account to save their work to the Cloud.

I do wish it had better selection tools. 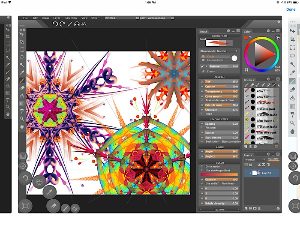 Paintstorm is extremely versatile and perfect for app geeks who love to experiment. Its devotees put up with some glitches here and there to enjoy this fun (though memory-intensive) program. The app may be a work in progress, but some glorious art is made with it. One of its more unusual features is being able to blend multiple  layers together. There are all sorts of oil brushes, gradient brushes, shortcuts, Incredible options for customizing brushes, support for PSD and ABR, full support for Apple Pencil, rulers, ellipses, perspective brush tools, and the ability to correct brush strokes for any parameter. It’s something like Corel Paint. The mobile app offers the same exact features as the desktop Mac version. The free version (the one I tried) allows you to work in up to 10 layers but only to save to one and to open a single-layer file. The paid one allows PSD import and export.  The app could use more type and comics-panel options.

There a lot of great art apps  but these are some of the best drawing apps for iPad Pro and other styluses. So if you’re still using Paper by Fifty Three (a classic that’s not bad to get started with), don’t be afraid to try something new. All of them offer different versions of analogue art supplies, which are, in short, brushes, colors, and surfaces. Just think, this guy does his art in Excel!