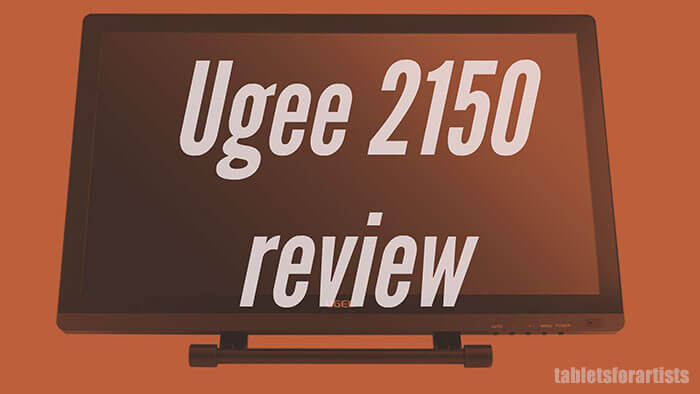 Previously, we took an-depth look at the Ugee 1910B, a budget tablet monitor similar to a Cintiq. Now we’re going to examine the Ugee 2150, a 22″ version that has a higher resolution display than the 1910B. Ugee was kind enough to send me a unit to test for a few weeks for this Ugee 2150 review.

Ugee is based in Shenzhen, China. They make pen tablets such as the 1910B, 2150, and HK1560 pen-display tablets as well as graphics tablets. 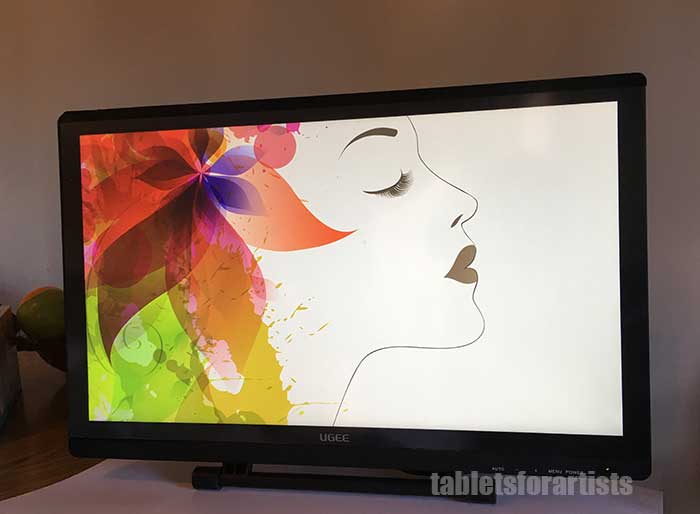 A big tablet monitor is not something you want to carry around at about 14 lbs., but since the box has a handle, you can take it places if you really want to.

It’s fine for lefties. Some controls are on the bottom right, but they aren’t ones you need to access often. Since there are no Express Keys, there’s no issue about which side they’re on.

As with the Ugee 1910B, the Ugee 2150’s box doesn’t have any printing on it, it’s plain cardboard. The packaging protects the contents well, and the inner cardboard box has a handle. The included items are individually wrapped and come in a smaller box. The pen says Ugee on it.

The Ugee 2150 drawing tablet monitor is made of sturdy black plastic with a narrow bezel. The bezel is completely flat, so you can bring your pen all the way to the edge, which is a nice touch. This way, you don’t end up with lines suddenly hitting the edge of the bezel.

There aren’t any Express Keys on the monitor, nor any on-screen ones. The pen has two programmable buttons that can be mapped to mouse keys and eraser.

The ports are in the back, under the stand. They’re reasonably easy to get to, though the stand gets in the way some. The ports have held everything well, but be careful about bumping into the monitor.

Colors are bright and clear, and matched my computer’s with a little adjustment to the brightness.

The glass is pretty smooth and a little slippery. There’s some squeaking from some pen strokes, but someone gave me a fix that worked!  SQUEAKY SCREEN FIX: Rub your hands all over the screen, then wipe it off with a cleaning cloth–wipe gently, not too hard. 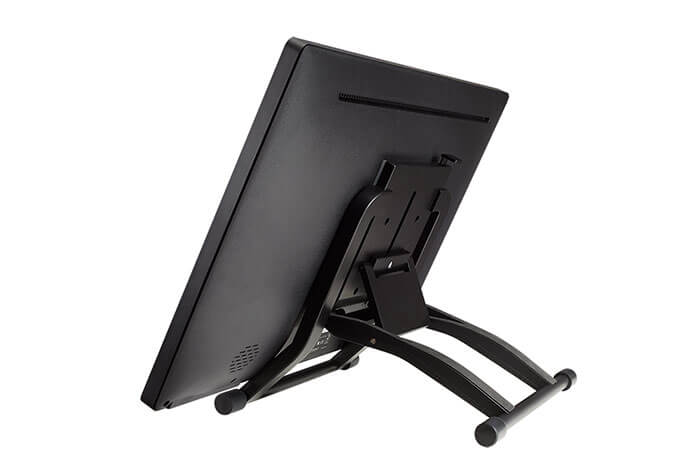 The pen doesn’t have a grip or indentation. It charges via USB and has a blue charging indicator. It weighs 17 grams, a good weight, and is comfortable to hold. It’s not too thick for my small hands. It says “Ugee” on it.

Calibration, which is 5 points with the Ugee driver, worked out of the box.

Here’s a pen demo I did of me sketching in Photoshop using the Ugee driver on Windows 10.

The driver is responsive and springy, going from a very thin line to a very thick one without blobbing.  I ended up leaving it set to needing less pressure rather than dialing it to the right.

There’s some parallax because of the distance from the pen tip to the glass, as is often the case with drawing tablet monitors. Nothing I’m not used to.

On Mac El Capitan, I tried Photoshop CC, Illustrator, Krita, Gimp 2.8, Manga Studio/Clip Studio Paint, Rebelle, Sketchbook Pro, and Sculptris, which uses ZBrush. Pressure and everything else worked great in all of them.

As expected, Illustrator and Inkscape did not get pressure, as expected (because only Wacom’s do), but you can still use these programs. Pressure works with vector layers in Manga Studio, so vector painting is not a lost cause. 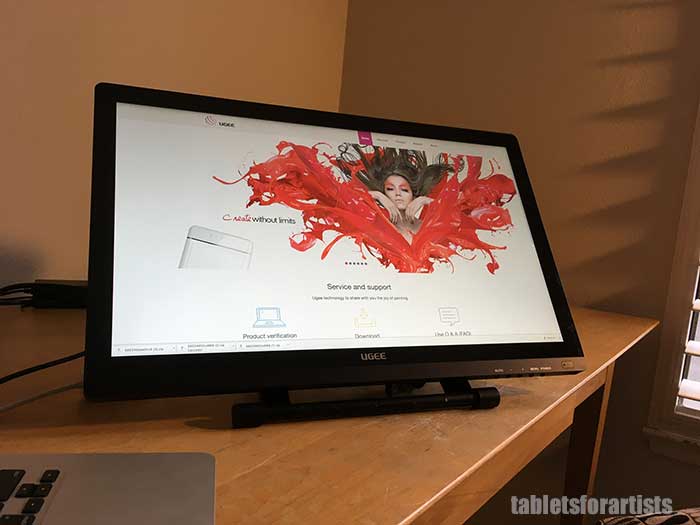 But in Sketchbook Pro in Windows, there was some lag. I could not get Gimp 2.8 to work on Windows. As per the Ugee site, I tried Gimp 2.6 instead, and this worked perfectly.

Installing the 2150 driver was pretty easy on both Mac and Windows providing that the computer is free of old tablet drivers. Ugee has a page with troubleshooting tips. The manual is clearly written and well-printed.

The Ugee 2150 is the same tablet monitor as the XP-Pen Artist 22, both are manufactured by Ugee.

No Ugee 2150 review can claim that the Ugee is “as good” as a Cintiq. But the Ugee 2150 is enough for artists who don’t need all the bells and whistles. It has the same levels of pressure sensitivity  and display resolution, and it’s brighter (250 nits vs. the Cintiq 22HD’s 230). The screen is glossier, because it doesn’t have the coating that Wacom uses to give the surface some bite. The included screen protector from 3M works well in giving the drawing surface a little friction.

The Cintiq 22HD lets you customize express keys and the pen buttons to keyboard shortcuts. The pens also have a variety of types of nibs. Cintiqs support tilt and rotation sensitivity and their stand rotates. They offer a touch version with which you can use your hands to do gestures or draw.

Wacom Cintiqs offer more features, but you don’t really need these to draw; they are to streamline workflow. The Ugee gives you most of the features of the Cintiq. The choice depends on your own needs and preferences.

Vs. tablet PC: The drawing features of the Ugee and other Cintiq alternatives are like those on tablet PCs such as Surface Pro and Lenovo ThinkPad Yoga–there’s no tilt recognition or express keys.

For on-screen keys, on your computer, you can download the Wacom Feel driver that gives you an on-screen radial menu, or the more robust Tablet Pro app on Windows computers.

Most users like the Ugee and feel it’s a good tablet for the money. Some of those who penned an Ugee 2150 review felt it was just as good as a Cintiq.

Others had problems with the drivers or figuring out how to calibrate it to their screen resolution. These problems are fixable. For instance, if the computer screen is a lower resolution than the Ugee, you have to use Extend, or view on 2, rather than Duplicate/Mirror. Otherwise you will get an offset.

Drivers can be finicky
No Express Keys (not a con if you don’t use them anyway)
Just one type of nib for pen
Stand does not rotate (but tablet is VESA-compatible, so you can use a mounting arm)

The Ugee 2150 is a spacious tablet monitor you use with Mac or Windows (or Linux, made by third parties). It’s well built, and colors are bright and clear. The stand doesn’t jiggle, and it’s highly adjustable. The pen gives good accuracy.

The drivers were pretty easy to install. You have to be sure to remove other tablet drivers and their remnants though. If you use Sketchbook Pro, the XP-Pen driver seemed to work better with it in Windows.

This tablet is especially good for students, beginners, artists on a budget, and those growing their art career. It’s simple, affordable, and does the job.

Links will open in the Amazon store local to your country.

Want to know more about tablets? Read our article: Best drawing tablet: a complete guide to art and graphics tablets