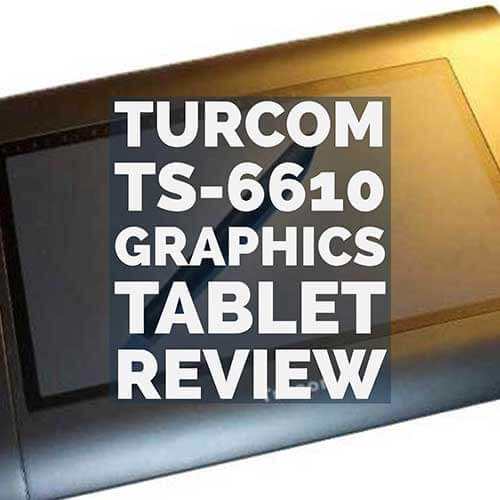 Summary: The tablet is built well, and the pressure curve is great, but the driver can be difficult.

I tested it with various art programs on both Mac and Windows, and reported the results below.

Type of tablet
Graphics tablet (no screen), attaches to computer
What’s in the Box 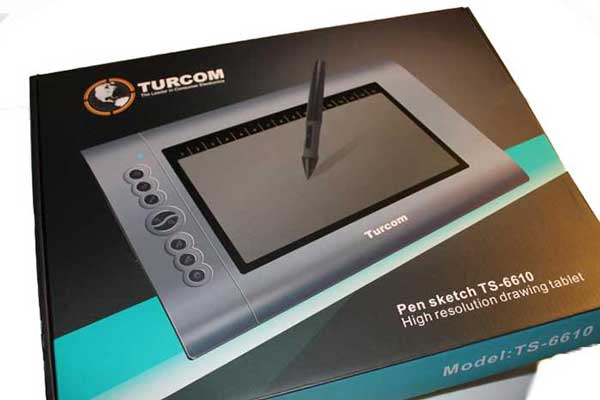 It’s pretty easy to take with you at a little over 2 pounds.

The driver has a feature that will adjust for lefties once they turn the tablet so the buttons are on the right.

Turcom was kind enough to send me this tablet. I tested art programs and installed the driver on different computers and operating systems. Overall the drivers worked best on Mac, then Windows 10 on laptop/desktop, then Windows tablet. The tablet and other items came safely packed in styrofoam . The quickstart guide doesn’t look professionally designed, but it has the basic information needed. There’s no larger guide on the TurcomUSA site (compare to Huion, which sends a more complete set of information in a booklet).

The Turcom TS-6610 tablet has a solid build quality, with eight customizable Hot Keys, including a two-button ring with a zoom in/out default function, and 16 softkeys you can program in the advanced driver settings. It looks a lot like the Huion H610Pro, but I weighed the two and the Huion weighs slightly more. The Turcom’s beaded surface is rougher than the H610 Pro’s, which is also beaded, but smoother. There are no Touch features. 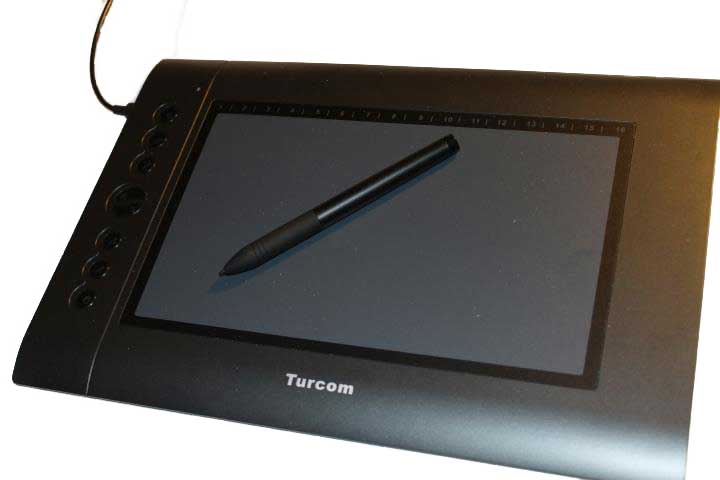 Some reviews say  it’s the same tablet as the Huion H610 (non-Pro), which has an AAA battery-powered pen. The specs and appearance seem to match. The driver for the Turcom is made by Huion. The download is on the Turcom site. I also tried the Huion H610/H610 Pro driver from the Huion site and it worked. 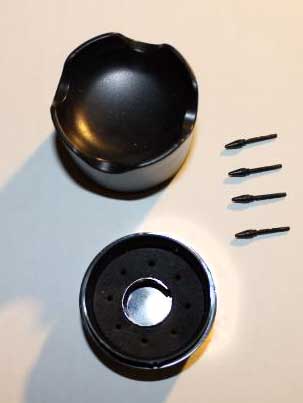 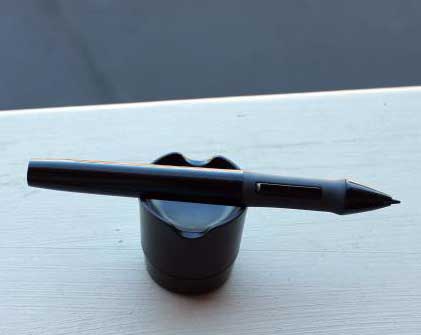 The pen is chunky, about 1/2″ at the thickest part, with the grip part being a little thinner. It’s pretty heavy with the battery in it–this is an AAA battery, not a smaller AAAA. The pen has no eraser at the end. The gray grip is hard, but has a more graspable texture than the rest of the pen, which is smoother.

The buttons are placed so that you have to be a little careful to not press them by accident, but you can get used to it and avoid accidental presses. The build is plastic and seems quite durable. The weight of the pen doesn’t result in too-heavy lines. The penn makes a scratchy noise when drawing on the beaded surface.

Drawing on the Turcom tablet

Palm rejection and hover work fine. The beaded surface provides a rough area that’s pleasant to draw on despite the noise, and the surface may cause nibs may wear down quickly–luckily, they’ve provided extras. There’s a row of numbers across the top that visually correspond to the softkeys.

Setting the pressure curve in the middle produced the best results for me. The most sensitive setting still provided good variation.

The pressure curve works great. It’s responsive and snappy and goes from a very thin line to thick. Setting it at lower sensitivity still gives a good variation. Both lower and middle sensitivity feel comfortable to draw, and I’m not a hard presser. It’s quite comparable to Wacom, and some may even prefer the Huion. It doesn’t cause any blobs or sudden changes. I didn’t have a jitter problem.

The tablet shows the numbers 1-16, so you can access these softkeys while drawing.

TIP: Keep other tablets and other items with electrical components at least a few feet a way, as interference from them can cause odd hover issues.

Both the 6610 driver from the Turcom site and the Huion H610/H610 Pro driver from the Huion site work on the tablet. Both drivers are made by Huion. It’s best to use the site ones because they are kept up up to date. The Huion H610 driver seemed a bit better than the 6610 driver, in that the 6610 would open up a page of what seemed to be developer’s notes. But otherwise they are similar.

When it works well, the driver installs quickly and easily. It can be a breeze or a hurricane, depending what’s on your computer. 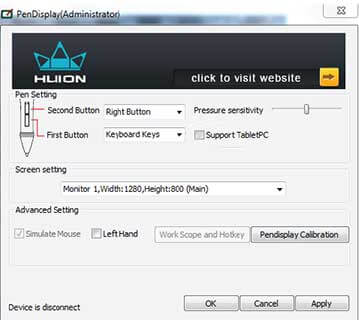 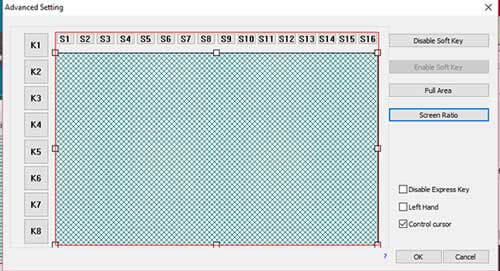 Troubleshooting the Turcom/Huion driver. If you’re having problems, these are things to look into: Install the drivers as Administrator. Delete all Wacom drivers and any other graphics tablet drivers. Even if they are not showing up in Control Panel they could still be there, visible in RegEdit (please ask someone for help if you are not comfortable going into your system and deleting files; deleting the wrong files can cause problems with your computer). Delete the Wacom Feel/Wintab driver if you have that (it can be redownloaded here). Delete all previous versions of this driver. Shut off all antivirus, including the default Windows Defender. Once all that’s done (and that is not the totality of possible considerations, but the main things I encountered after trying it on several different Windows 10 computers), you should be able to open the settings. Huion has a support thread on Deviant Art as well as offering other ways to contact them, including Skype.

Using a penabled Tablet PC will not interfere with the driver.
Turcom/Huion driver on Mac (El Capitan)
On the Mac, the driver installed beautifully, but I have less stuff on the Mac. The Mac driver doesn’t have the Pen Pressure Test panel, but that’s no big deal.

I could not get Tablet Mapping to work.

Wacom drivers are more robust with more ways to customize, since the Radial Menu with its submenus offers 64 different programmable shortcuts to the Turcom’s 24 (not counting pen buttons for either). Wacom has a more complex pen-pressure options, the ability in the Pro tablets to customize per application, and screen mapping as well as tablet mapping. They generally are easier to install (some will disagree). Some Wacom tablets have touch. Wacom offers tilt sensitivity, and in the Pro versions (Intuos Pro and Cintiq) also rotaton sensitivity. Wacom’s has a mouse mode and the Huion driver does not.

Not everyone needs to use a lot of customization (or any; they are totally optional), and the Huion drivers do nearly the same amount of things as Wacom’s.

Wacom’s tablets come with some art software bundled and some offer Touch.

Art programs in Windows 10
I got pressure in Photoshop and Sketchbook, though it took a restart whereas GIMP and Krita worked right away. The tablet worked in Inkscape, but I couldn’t get pressure in Inkscape’s Calligraphy tool with the pressure box checked. It works in Illustrator without pressure. Huion says they are working on pressure for Illustrator.

Art Programs on Mac
Same results as Windows but less fussing to get pressure in Photoshop and Sketchbook.

As with other graphics tablets, this one also works well as a rather large mouse substitute for opening programs, editing documents in Word, etc.

Customer support. Huion seems to have a bigger online presence than Turcom, and since the drivers are Huion’s, asking Huion or perusing Huion threads where they have responded can be helpful in troubleshooting. Huion is good about answering, and can be reached via email, Skype, or phone. The company also a support thread on Deviant Art here.

The Huion H610 Pro specs are higher–it has a higher resolution (5080) and report rate. The H610Pro’s pen attaches by a cord, avoiding taking a battery, thus the pen is lighter. Other than that, the pen size is similar to the Turcom pen. The Turcom tablet is a little heavier and its surface somewhat smoother (all models may not be exactly the same). The Turcom’s resolution is like the Intuos, and the Huion 610 Pro’s is like the Intuos Pro.

Most users are happy with this tablet, praising its affordability, size, and capabilities. Many see it as a good alternative to Wacom. Some had problems with the drivers and some reported hover issues, but overall, comment are positive.

The Turcom TS-6610 graphics tablet is a viable starter alternative to a Wacom graphics tablet; you may want to upgrade after a while. The drawing experience is really good, with a large surface and good pressure sensitivity.  If you have a decent understanding of your computer and file systems, then potential driver issues should be manageable. If that kind of thing is overwhelming to you, you may be better off going with Wacom.

Free software such as Gimp and Krita actually worked better off the bat for me with this tablet than did Photoshop CC,  which took a restart to get pressure working. Using this with free software can get you going in digital art without a major investment.

What the Turcom TS-6610 graphics tablet can do, it does well, and offers a lot of value. Good for students, beginners, or those on a budget.

See our review of the Huion H610 Pro

See our review of the Monoprice graphics tablet

See our review of the Intuos Pro

See our review of the Intuos Pen and Touch Small