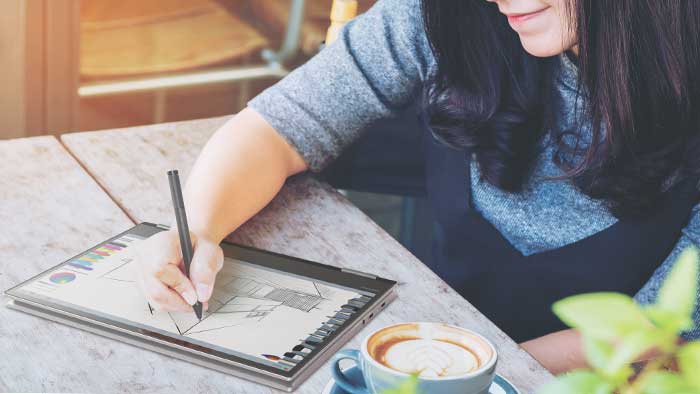 Best tablet PC for drawing: laptops and 2-in-1s for artists in 2017

What’s the best tablet PC for drawing? Here’s what to look for:

The best tablet PC for digital artists has power, portability, and a great display. The very top have a dGPU to give Photoshop filters a boost–not a necessity for all artists.

All these computers are great for drawing directly onto the screen, as well as note-taking and photo editing. And they’re portable to boot. All have an active pen that lets you draw naturally with state-of-the-art digitizers including Wacom, N-trig, and Synaptics.

Best of all, a lot of these tablet PCs for drawing have 15 and 16″ displays–a generous canvas area just makes drawing so much easier.

Some are powerful enough for video editing. A lot of these are not just the best 2-in-1s for art, but the best tablet PC for general use, productivity, students, and professionals from all walks of life.

To make it easier, links open in the Amazon store in or near the country you’re in.

Here are our picks for the top ten tablet PCs for artists in 2017: 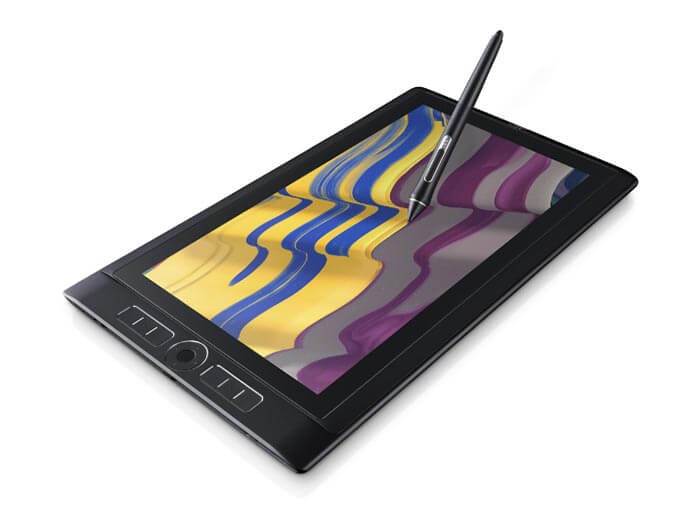 Who wouldn’t want one of these? With its buttery-smooth patented Wacom EMR digitizer and generous sizes of 13 and 16, the MobileStudio Pro tops our list in drool-worthy tablet PCs for drawing. The 16 has an option with a 3D camera/scanner and NVIDIA graphics. With its chrome Express Keys, quiet fan, and Pro Pen 2 with 8,192 levels, there’s a lot to work with.

With the optional Wacom Link, you can hook it up to a Mac or PC and use it as a Cintiq. It gets 95% of the Adobe RGB color gamut, making it a great tablet PC for photo editing as well as art. This is certainly a best tablet PC for Photoshop. Runs WIndows 10.

See the MSP on Amazon 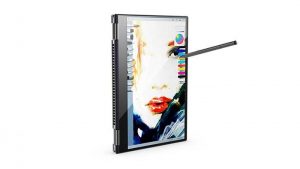 The Lenovo Yoga 720 goes where no convertible laptop has gone before–it has a dGPU and works with the Lenovo Active Pen, a Wacom pen with 4096 levels. It’s a convertible laptop that folds into 4 positions. That means the keyboard doesn’t detach, making it an excellent all-around productivity machine as well as art device. Tablet mode makes it easy to draw on, though you won’t be able to access the keyboard in this mode. Windows 10 is the operating system. The Active Pen is responsive and accurate.

See it at Lenovo

See it at Best Buy 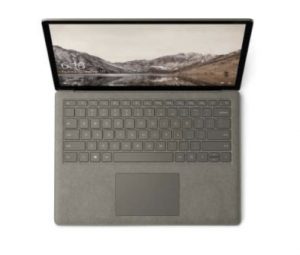 You might think of this model as the Surface Pro 5. The new Surface Pro’s pen has 4,096 levels of pressure sensitivity as well as tilt, and lets you shade with the side. The pen is sold separately. The keyboard is covered in Alcantara, a fabric that’s easy to clean and gives you a nice soft place to rest your mitts. The PixelSense display is crystal clear.

If you want a GPU, though, you’ll have to get the Surface Book, which has that option. The Book is “laptop first,” with a metal keyboard that detaches. Its battery life is not as long as the Pro.

The Vaio Z Canvas has integrated graphics, but its Intel Iris Pro Graphics 5200 graphics is as powerful as a dGPU. This little tablet is a mobile workstation on which you can edit video. It has an N-trig pen with 1,024 levels, and you can also use a Surface Pen on it, though don’t count on getting more than 1,024. The number of levels don’t matter a whole lot.

The Vaio Z Canvas has some nifty art-centric features. The keyboard does not attach but connects via RF. The Z Canvas has a 12.3″ screen and has a 3:2 aspect ratio, which is valuable for drawing. The display gets 95% of the Adobe color gamut, making it a best tablet PC for photographers as well as for drawing. There are on-screen controls aimed at artists, and you can map it to multiple monitors.

The Vaio Z Flip is similar, with an attached keyboard, and is also an excellent detachable PC for drawing. 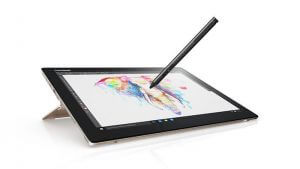 The Lenovo Miix 720 lacks a dGPU, but is a nice all-around detachable that also takes the Lenovo Active Pen. It has frequently been compared to the Surface Pro 4 specs-wise, but has the Wacom pen. It has a QHD screen that’s a sunny 400 nits. Lenovo has a wide variety of Miixes with active pens. It’s a pick for the best tablet PC for drawing.

Though it’s a little older, the 1st gen ThinkPad Yoga 14 is still around and has NVIDIA graphics. 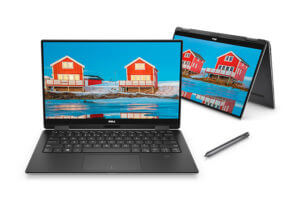 Super skinny convertible laptop has the Dell Active Pen, which uses Wacom ES. This Dell won an innovation award at CES. Though its processor is not quite as strong as the Dell XPS that’s lacking a pen, it still has plenty of power. (That other Dell rivals the MacBook Pro but has no active pen; this is one is not quite as fast.)

It’s light and portable. Its Infinity Edge screen is nearly bezel-less. The pen gets 4096 levels. There are both HD and higher-res UHD display options, at a bright 400 nits.. The keyboard doesn’t detach, but you can fold it all the way back.

With an i7 processor and Wacom EMR. Samsung has created a powerful all-around notebook. It has imported Air Control from its Android tablet–a radial menu that can be controlled with the S Pen. The included S Pen now rocks 4096 levels of pressure and gets tilt in certain apps.

It’s a bit weighty at 4.5 lbs. and the battery isn’t the longest at 6.5 hours, but for a 15.6″ screen I can live with that. This is one of the more powerful of the Samsung tablet PC lineup.

The Asus Transformer T304UA is a powerful detachable PC with an included Synaptics pen.
There’s an i7 processor with a 256GB SSD and 8GB Ram. Battery life goes to 8 hours. With the keyboard attached, it still weighs under 2 lbs and is super thin at .3″. The 2164 x 1440 FHD resolution is decent.

One notable feature that makes this a good tablet PC for artists is that the display covers the full RGB color gamut. The Asus has a Windows 10 touch login with fingerprint sensor and Windows Hello. The included keyboard is backlit.

The only drawback is its Synaptics pen, which is a bit less accurate for drawing than its competitors such as Lenovo, which uses Wacom, and Microsoft’s N-trig pen.

Convertible ultrabook with 360-degree display comes in 13″ and 15.6″. This powerful convertible tablet PC touts 16 hours of battery life. It’s got a 4K display, Thunderbolt, NVIDIA graphics, over 12 hours of battery life, and Bang & Olufsen speakers. There’s also a far more affordable model without so much power, but still not bad. A really nice-looking, light, and powerful Windows device. However, its Synaptics pen is just a bit less accurate than Wacom and Microsoft’s pens. 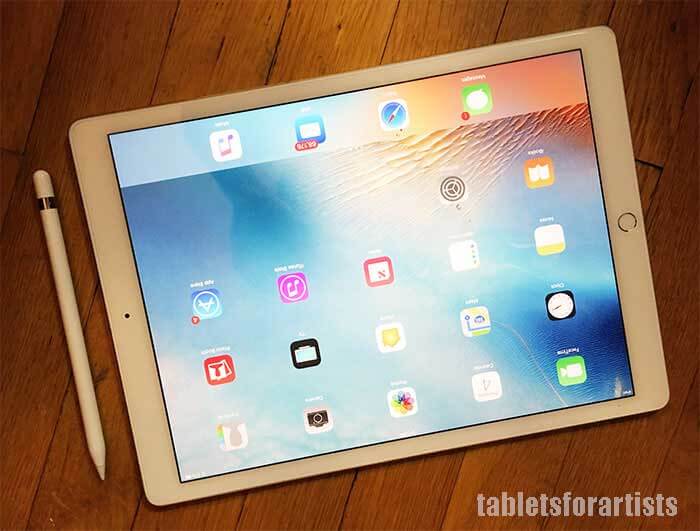 While you may not see Apple as a tablet PC, in fact its A9X processor with 12 graphics cores is as powerful in some ways as one. So I think it deserves a place here. It doesn’t run desktop apps, but apps like Procreate and Medibang offer a lot of the features of Photoshop, including the ability to create brushes, use lots of layers, high-res files, 3D, and your favorite filters.
With the Astropad App, you can use the iPad Pro and Apple Pencil as a wireless Cintiq-like input device with your Mac.

The new iPad Pro for 2017 even has a Windows-like File Explorer, so you’ll be able to find your stuff. Runs iOS.