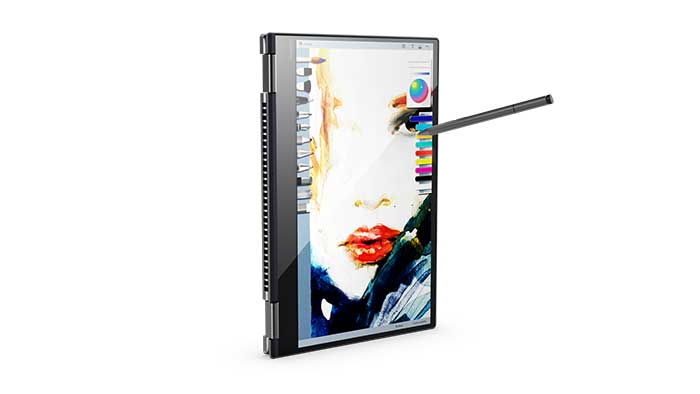 The Lenovo Yoga 720 2-in-1 goes where no convertible tablet PC has gone before. It combines a pen that gets 4,096 levels of pressure sensitivity with a 4K screen and NVIDIA graphics. This noteworthy hybrid is more proof that Lenovo is forging ahead with innovative art devices. The  Yoga 720 tops the Yoga 710, which also had the dGPU.

Pen: Lenovo Active Pen 2 or any pen that works on Wacom ES

13″ model comes in Platinum Silver, Iron Grey, and Copper. The 15″ comes in Iron Grey and Silver.

Lenovo states that on the models with the NVIDIA GTX 1050 card, you can edit photos, play advanced games, and render multiple videos at once. 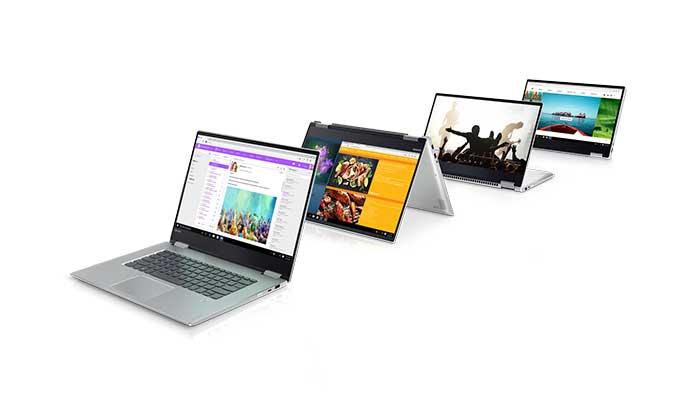 The Yoga in all its poses.This is the 13″ mode.

At the bottom of the post is a downloadable spec sheet with more detail.

The Lenovo Yoga 720 (YOGA 7200 151KB) has  up to the latest Intel Core i7 Kaby Lake processors. The 15″ Yoga 720 at the moment is the fastest in its class, which is convertible laptops. Like many Lenovo products, there’s a dizzying array of configurations, so I’m summarizing them here rather than writing each one out.

The highest-powered and largest one will probably excite digital artists the most. That would be the one that’s 15″ and has discrete NVIDIA graphics, suitable for rendering Photoshop filters and for gaming.

The fact that you can add your own memory is a plus. Many PC hybrid laptops have the memory soldered in and don’t let you upgrade.

The fast processor also lets you boot up quickly.

Unlike some thinner and less powerful ultraportables, this laptop does have fans, and it can run warm. The vents are in the back.

The Lenovo Yoga 520 is a more entry-level option with only has Intel i3 and 15 and HD. It has a 14″ screen that also has the Wacom digitizer. It also has the option of the NVIDIA GeForce 940 MX graphics card. It’s a good even more affordable option if you’re not a power user; you can use Photoshop and other Adobe software on the i5, and on the i3 too but we suggest the i5 if you’re going to get the Yoga 520. The 520 will be for sale in July 2017.

Want a detachable instead? Try the Miix 720

If you’re looking for a powerful detachable, the Lenovo Miix 720 is not quite as strong as the Yoga 720 but it does let you take off the keyboard.

The Yoga 720 and 520 work with the not-yet-shipping Pen 2 or with any Wacom ES pen, so it won’t be difficult to find a pen. Some product info says the “new release” Active Pen 1 is capable of getting the whole 4096.

Though Wacom ES is lower resolution than EMR, there’s practically zero parallax (distance from pen to line). The pressure sensitivity and palm rejection work well, and I can’t tell the difference between 2048 and 4096. The Lenovo Active Pens do not have tilt sensitivity.

A 15″ surface is a great size for drawing, and there are few portable tablet PCs around this size, besides an older Dell Inspiron 7568 and the MobileStudio Pro 16 by Wacom. The 13″ screen is a good drawing size, too. The Yoga 520 has a 14″ screen.

The larger, 4.4 lbs. model of the 720 is pretty good for a 15″ screen. You should carry a sleeve to keep the pen in, as there’s no silo. The 13″, at 2.9 lbs, is not the lightest laptop, but still carryable. Since it’s a clamshell, there’s more protection than you’d find in something with a soft keyboard such as the Surface Pro 4.

The IPS screen is antiglare but still glossy. Viewing angles are pretty good.

Brightness-wise, at about 280-300 nits it’s bright enough, but colors are not as vibrant as some laptops, but it’s not bad.

This nondetachable laptop has a 360-degree hinge, letting you bend the Yoga to poses of laptop, stand, tent, and tablet. “360 degrees” may sound like you can also rotate the screen; you can’t. It bends on hinges, like other Lenovo Yogas.

The screen gets over 100% of sRGB, better than most laptops, but it’s not wide gamut, so those who need Adobe RGB coverage will have to look elsewhere.

The large lower bezel on the bottom is an odd design touch but I think it’s to make it easier to pick up the device in tablet mode without getting fingerprints on it. The other 3 sides have a very thin bezel. Designwise, the Yoga 720 doesn’t stand out. It doesn’t have the distinctive watchband hinge of some Yogas. One cool thing is the fingerprint reader to the right of the trackpad.

The island-style keyboard has keys with key travel not as high as the most comfortable keys, which are deeper, but the keys are fine. They are about 1.2 mm, and I prefer to type on 1.4, yet 1.2 is OK. The keyboard is full-size and backlit. Since the keys are recessed when the laptop is in tablet mode it makes sense for them not to be taller. 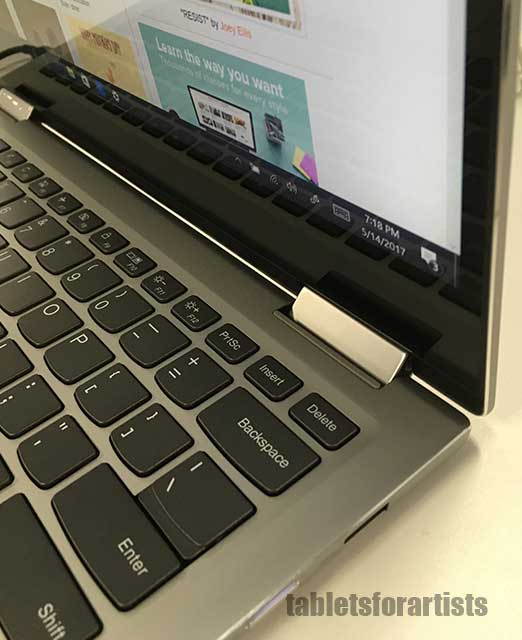 Not amazing battery life
USB ports only USB-3, may be a difficulty for some users
colors not super-vibrant
no Adobe RGB
some fan noise

Lenovo claims 9 hours battery life for the HD and 8 for the UHD (4k), but this would depend a lot on use. A 4k screen and graphics rendering is going to take up more power and drain the power faster.

Lenovo Yoga 720 reviews have been positive, though the product is still new.

The lower-spec model is OK too, but without the dGPU it doesn’t differentiate itself a lot from others in the same category.

The lack of Adobe RGB may be a sticking point for some.

This is not the fanciest-looking tablet PC, but the one with NVIDIA is high-performance. Lenovo is not not adding a premium to the price for the art capabilities. The specs of the higher -end model compete with the Wacom MobileStudio Pro, which of course has more specialized art features. The 720 is a good value for a powerful art PC.

The large size alone is enough reason to appreciate this release. It fills a gap that’s been missing since the Lenovo ThinkPad Yoga 14 1st gen, namely that of discrete graphics. This Lenovo  Yoga 720 review is a thumbs-up, and we’re adding it to our top list of tablet PCs because of its dGPU and Wacom pen.

See it at Lenovo.com

The Lenovo site has descriptions of each model.

Here’s a short video by Lenovo.

More about top tablets for artists at homepage