A Conversation with Isaiah Coberly of FlipSteady Handmade Cases for iPad, iPad Pro, and Cintiq Companions

Looking for a handmade iPad case? Now you can have one that’s not only handmade, but opens like a Transformer, folds and unfolds like origami, and has an adjustable stand that can rest on a tabletop, lap, or knee.

If you’d like to hear our recorded interview with FlipSteady inventor Isaiah Coberly in which he talks about his ideas and and the meaning of being a small, independent designer and inventor in a world of mass production, click the button above for the audio.

These unique, artisanal cases are available for iPads, iPad Pro, and Cintiq Companions. The FlipSteady is the brainchild of Isaiah Coberly, whose home and workshop are in Tacoma, Washington. His company is called New Pencil.

You can get a FlipSteady case for: 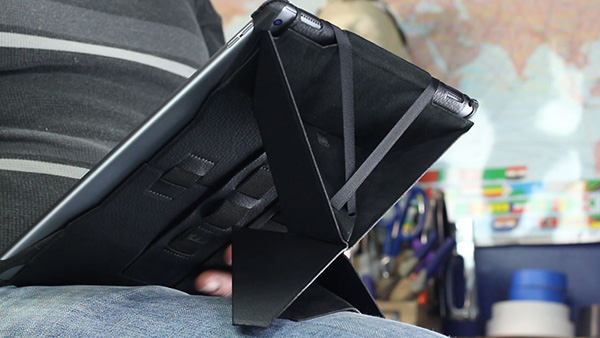 The cases stands up on many surfaces, including your lap. You can work on a plane, on a park bench, on the sofa, or in bed. Just open the cover and set it down. You can stand it up in portrait or landscape. You can rest it on your knee as an elevated desk with a rotating stand.

The cases are made of fine-hand Majilite synthetic leather and synthetic Toray suede, the same materials found in yachts and high-end car interiors. The stand is made of 50/51 aluminum, which is thin and pliable, yet rigid. The glue is a non-toxic, water-based glue that’s a recent innovation from 3M. Isaiah was familiar with these materials from years of working with his friends at the upholstery department of Belina Yacht Interiors. Belina spares no expense when it comes to quality, and Isaiah shares the same ideal.

FlipSteady cases are vegan-friendly, including the glue. 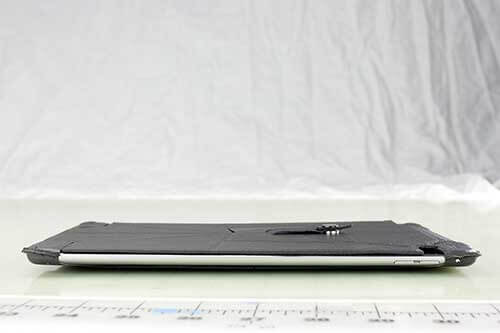 Isaiah is not new to tech. His background is in CAD and CADCAM software for architectural and industrial design. In the 1990s, his inventor’s mind saw a relationship between those 3D design programs, mostly used by architects and industrial designers, and art programs such as Alias Wavefront’s Maya and Pixologic’s ZBrush.

He realized a way to use these art programs to fabricate actual sculptural carvings. Word got out, and furniture and interior designers of custom high-end carved interiors began calling. They flew Isaiah back and forth to California where he programmed automated wood-cutting machinery to carve sculptural moldings 20 to 30 feet long, installing these in ritzy homes and casino interiors.

But he grew dissatisfied. These beautiful interiors were not shared with the public. He wanted to do work that made a difference. 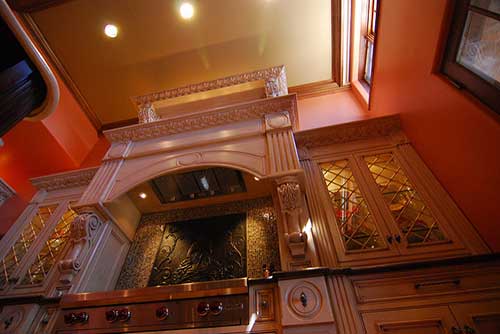 Around that time, he also worked alongside artist Ulrich (Rich) Pakker to create several monumental sculptures. These metal and glass structures could withstand absurd amounts of wind, some standing as high as 25 feet in the air. The sculptures still live in public places around the continent.

“Working with Rich was pretty satisfying, but the work became less frequent. I didn’t want to go back to doing custom interiors so I kept kicking around ideas to make my own things. I kinda always new that I would eventually invent something. I don’t even really know that the FlipSteady is that thing,” says Coberly. 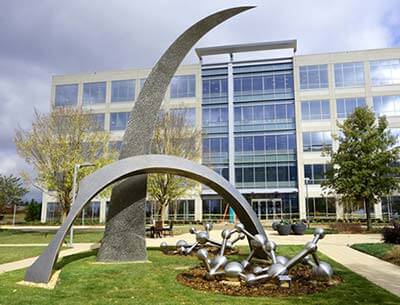 He started FlipSteady with a successful Kickstarter campaign in late August, 2012, raising nearly $30,000. He shipped backers their first-generation cases within a week of the scheduled delivery time, unusual for this type of project, which often runs late. 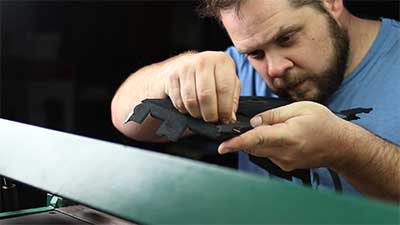 In the spring of 2011, when the iPad came out, Isaiah excitedly got one. Examining the Smart Cover available for it, he noticed some shortcomings: you needed two hands to hold it, and they only had two positions, both landscape.

He thought, “there has to be a better way.” As he was walking from his car to his home, the idea hit that a case could be made with a different cut pattern that would make a better stand. He went home, grabbed a shoebox, cut it up, and using duct tape, assembled a case. The first FlipSteady prototype was born. Here’s a video of Isaiah with the prototype.

By 2012, he had learned all about the materials and automated machinery needed, and started a beta production process. Belina Yacht offered him floor space on weekends. Recruiting his friends to the shop, they turned out 300 or so FlipSteadies in two weekends. These were shipped all over the world.

Since then, it has been a process of refinement. Coberly is constantly investigating and experimenting with ways of improving the cases. 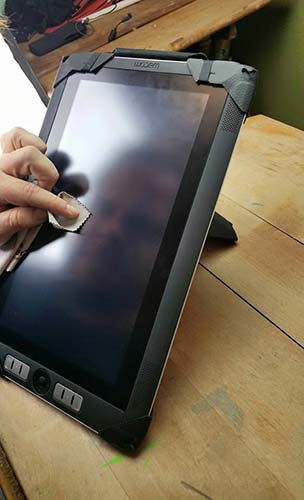 Being in the arts, he decided to only make cases for artists, so besides the iPad cases, he chose art tablets that lacked case solutions, such as the Cintiq and Cintiq Companion, which only had sleeves available. He also made a case for the Samsung Ativ 700t, a 2-in-1 Windows art tablet.

Once the FlipSteady came out, artists came out of the woodwork. FlipSteadies are used by many well-known digital illustrators, fine artists, designers, animators, CG artists, and even tattoo artists.
Coberly even did a line of Lenovo Helix cases for corporate clients that supply employees with the hybrid laptop, which detaches from its keyboard to become a tablet with a Wacom digitizer.

DIY kits to help others help themselves

Coberly has a vision of using his cases to help others by creating do-it-yourself computer and paper-tablet cases that people such as artists, those with disabilities, and pregnant women can put together and sell. The case is a totally new way to express his invention using bamboo ply, suede hinges, and recycled rubber components. He’s designing the kit so that it can be made by any able-bodied person with a bottle of super glue and a razor blade. He explains in more detail in the recorded interview. 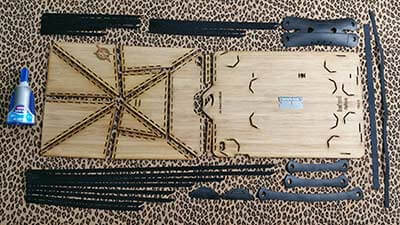 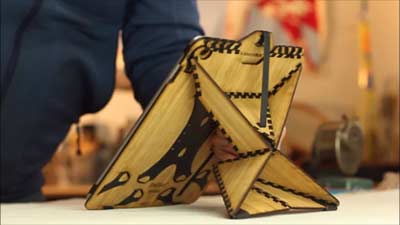 Recently, he was contacted by a rep from Apple Business Development, a concierge for local Tacoma businesses that use Apple products for work. The rep strongly believes in the cases and wants to use his connections at Apple and hopes to get the FlipSteady into Apple retail stores everywhere, right alongside Apple’s own cases.

Isaiah is used to enthusiastic reactions. “I love to give demonstrations of my invention in bars, cafes, and wherever I go…. It never mattered whether I was showing a cardboard-and-duct-tape prototype, or a carefully finished product. I flip the invention out onto a bar and I’m guaranteed to see jaws dropping like dominoes in a row. From my end of the bar, it always looks to me as if everyone has just seen a glimpse of the future and is now in a state of shock. “You’re going to be rich!” “You should go on Shark Tank.”

He DID almost go on Shark Tank, the famed reality show where  small businesses vie for seed money from a panel of wealthy investors. He was approached by the show and got the 29-page application packet, but he had doubts. It didn’t represent what he believed in. Listening to his inner guidance, he decided against it.

“I personally feel humbled to be a maker of things”

Isaiah encourages others to follow their dreams.  “I believe that it’s my job to encourage these shy ghosts of ideas to materialize themselves and take their place under the spotlight….

“I think hands are doomed to be underutilized in a time when people make less of their own things. There seems to be a common belief that creating things is reserved for rare talent, those trying to be famous, or the less educated. On the contrary, I personally feel humbled to be a maker of things and remain dedicated to the mastery of my craft.”

Besides showing people the FlipSteady in “bars and cafes,” he gives talks to schoolchildren to inspire them. He says, “I tell my kids all the time, you will eventually master whatever you practice enough at, and I hope they practice good things.”

So if you’re looking for a unique and versatile handmade case for your iPad, iPad Pro, or Cintiq (complete list above), check out FlipSteady, where you can purchase the cases. Use the code tabletsforartists to get $5 off. 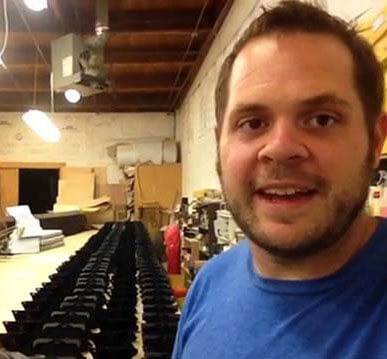 Isaiah in his studio, a line of FlipSteadies behind him

There’s lots more videos at the  FlipSteady YouTube channel and more photos and info at the FlipSteady Facebook page.

Here again is the audio link.

And here again is the FlipSteady site where the cases are for sale. Use code tabletsforartists at checkout to get $5 off.