Google’s tilt brush app is a fun, free app you can use with Vive and Oculus Rift headsets. I gave it a whirl to try to compare it to the experience of drawing on a tablet. 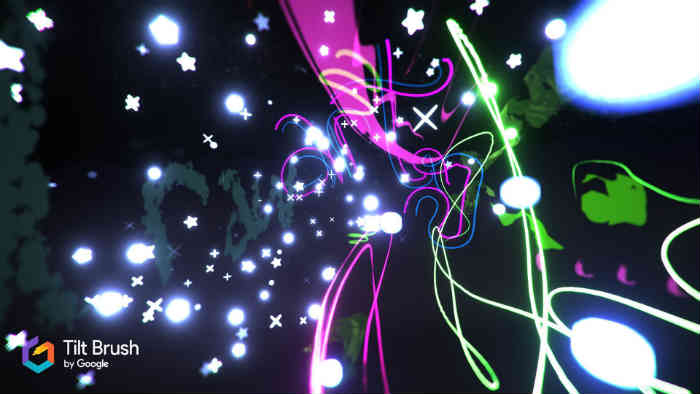 “Art” in the cosmos. (credit: Tablets for Artists)

The first thing is that the software is simple, comparable to a mobile app. It takes 15 minutes or so to learn your way around the app. The biggest challenge is sensory overload. It feels absolutely real. I suggest not doing things too quickly. I didn’t make much attempt to make a finished work of art, and am still a beginner. I can see that it has a lot of potential, and would take a lot of practice to get better control over it.

Drawing is a bit challenging because your sight line and angle easily changes. For instance, this virtual snowman’s carrot nose looked a lot better in the headset. And the 3D effects aren’t coming through with this brush. Even approaching the snowman was tricky; I learned I had to walk right up to it rather than trying to reach it.

Another issue is that in a hot room, the headset can end up sliding down your face due to moisture, which can make it harder to see the controls, and affect visibility of the whole thing. It works best in a cool, dry room. 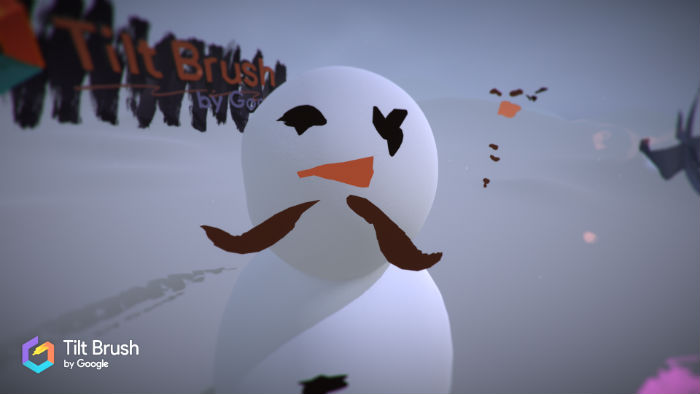 Tilt Brush app lets you paint in virtual reality that you’re right in the middle of. The room is your canvas. Just put on your virtual reality glasses and fire it up. Anyone can use it immediately; it’s intuitive.

You hold a controller in each hand; I found myself switching brushes a lot with one and taking a lot of snapshots, videos, and gifs with the others. The virtual controller has brushes with strokes of fire, snowflakes, and stars. There’s a full color wheel and picker. You can have a lot of fun with the effects. One of the coolest ones is smoke, which produces a foggy atmosphere (reminded me more of fog than smoke).

Inside Tilt Brush, you’re in charge of the sky and the backdrop of your world. You can pick different environments, moving from skies to mountains. For gaming veterans, the interiors of Tilt Brush may feel like a step backward, as there’s nothing that fancy, no characters or elaborate worlds. But you’re the creator here.

You can import 3D objects and draw on them. This was a bit tricky due to the angles. There are even audio-reactive brushes that bounce along to tunes. You can paint along with others as a group. VR parlors provide equipment for kids to Tilt Brush at parties.

Google has enlisted artists-in-residence at the Google Cultural Institute in Paris to share their creations. They work in a range of media, from animation to murals to computer art, and bring these sensibilities to their Tilt Brush work. They created pieces including disembodied organic, geometric tangles; humorous game-inspired animation; a “junk robot” aesthetic; and, from a hip-hop artist, dancing light beams.

One of the importable objects is dress form. Why a dress form? One possible use of the app for clothing designers to quickly make 3D mockups using realistic fabrics and textures.

Tilt Brush brings the potential of digital art to a new level–that of sculpture. It can also be just fun way to doodle or play with friends. The app has recently gotten an update.

It’s definitely worth a try if you’ve got access to a headset or VR parlor near you.

The Tilt Brush app itself costs about $20.00. it’s bundled with the HTC Vive. Share your Vive art in the Steam Community. You can also use it on Oculus Rift. Follow #tiltbrush on Twitter.