Should artists use a screen protector with the Apple Pencil? 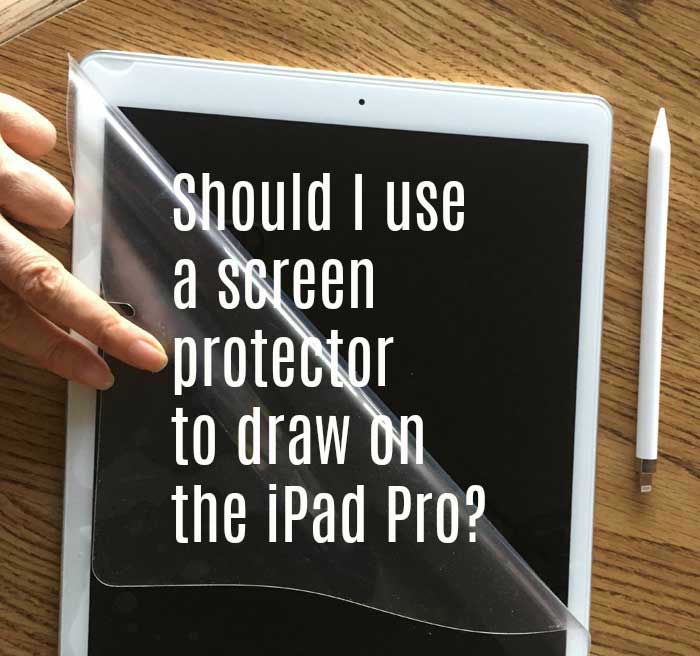 Now that I’ve had my iPad Pro for a while, I’ve finally gone beyond random scribbles and dived into some apps and drawings. I now find it to be my main tablet, since I’m addicted to its portability and wide choice of apps. But, slipperiness is an issue; sometimes I feel like the Apple Pencil is skating on a tiny ice rink. Finally I got around to trying a screen protector to draw on the iPad Pro.

Slip slidin’ away on the unknown glass

Unlike Wacom, Apple does not coat its glass with a substance that gives it a paperlike bite. The benefit of not having this coating is that that the display’s colors are bright and clear. But your hand can slip around.

Nobody but Apple knows what glass is used in the iPad Pro. The Surface Pro and many other tablets, including, reportedly, the first two iPads, used Gorilla Glass, but Apple keeps the iPad Pro glass a secret.

The iPad Pro screen does come with both a fingerprint-resistant oleophobic coating, and an antiglare coating. All the same, it gets smudged easily, and I can see my face in the screen when the tablet is turned off, so glare is there. Without these coatings, the glass might be even slicker.

The Apple Pencil is relatively heavy, and the length of it took some getting used to as far as finding my balance, making the slipperiness even worse. Its tip is hard rubber, not plastic, but the rubber is so hard that it’s plasticlike. I had put a matte screen protector on XP-Pen and Ugee tablet monitors and liked the feel, so I decided to try one with the iPad.

I got the Photodon matte MHX 25% anti-glare high-definition for the 12.9″ iPad Pro, ordered from Photodon. Photodon makes high-quality screen protectors. They’re a little pricey (this one is over $20 for one), but you can get a wide variety of surfaces for just about every screen you can think of. If they don’t carry the size you want, they can custom-cut one. You can also order sample packs to try out different types. I didn’t consider a glossy one because a matte surface gives the tooth I want.

The Photodon protector perfectly covered the whole screen and the border as well, with cutouts for the home button and camera that fit fine.

The screen protector came with a cloth, a moist wipe, and a sample piece to test. I followed the instructions as well as I could, except the optional one to use a vacuum to get every speck of dust. I don’t have a vacuum like that. Luckily, the vacuum was only a suggestion. I also turned off the screen so it would be cool, as the instructions said.

Bubbles in a screen protector are a pain. They are visible and distort the image. Oddly, drawing over them doesn’t seem to affect the drawing much unless the Apple Pencil gets caught on one. There are ways to get rid of bubbles but it’s not easy.

One solution for bubbles I’ve heard about but haven’t tried is to put on the screen protector in a steamy bathroom, but it’s over 100 degrees outside today, so I didn’t feel like creating a steam room.

Does a matte surface wear down the Apple Pencil tip?

If you press very hard, and draw all day, you might wear down the tip a bit. But your lines and painting are coming from software, not the sharpness of the tip.The tips are not that expensive to replace; you can buy a 4-pack of them.

I have only just installed the screen protector so it’s too early to say, but I doubt it’s going to be a problem.

You just don’t want to wear it down to where it’s whittled to a sharp point and tears your screen protector or scratches your screen. It’s an unlikely scenario.

Another benefit is that it’s possible to scratch your screen with the iPad Pencil if a little speck of sand or dust lodges itself in the rubber tip. A screen protector provides protection against such a mishap.

Touch works fine with the protector on. If anything, the screen protector will save your screen from smudges from your hands. It also improves handwriting.

Screen protectors can be hard to put on; they also add some expense. Bubbles can be hard to get rid of.nti-glare coatings can reduce clarity. The film may block or even refract light, causing a slight blurriness or the appearance of colors via the refracted light. I don’t find it to be an issue in this case.

The verdict: I am pro-screen protector

I find it better to draw on the iPad Pro with a screen protector than not. I was able to draw my straightish lines a lot easier than before, when the Pencil tip would slip. It makes me draw a little slower, with more control. That ends up making me work faster, as I’m not fighting the slickness or spending much time on cleanup.

I stopped getting tons of little “hooks” on my lines that were caused by slipping. Erasing those hooks was a time-consuming task. They would show up right in the beginning and sometimes also at the end of the line, like a tail.

They happen when I’m rushing and make initial contact strike too hard. I find these hooks are really related to screen surface, perhaps related to coatings or lack of–in one of my old old tablet PCs with a hard plastic screen, it was almost impossible NOT to get them.

If I concentrate I can stop getting them, but in drawing, there are so many things to focus on at once that any help in that area is needed.

With the protector on, there’s less glare, and a lot fewer fingerprints, even though this model lacks an anti-fingerprint coating.

There is an occasional squeaking sound, but this may stop once the oils from my hands coats the whole surface. There’s less of the tapping noise that results when the Pencil meets unprotected glass. There’s now more of a soft whoosh or whisper: the “iPad Pro whisperer” perhaps.

Colors are not affected and the screen is as sensitive as before.

Antiglare also protects your eyes, especially in bright light, more of an issue when outdoors.

As I haven’t tried other brands of screen protector with the iPad Pro, I don’t know which are best–maybe I’ll try some more.  I have tried other screen protector brands on other tablets. I think in the end the effects are similar, but the durability may be different. The Photodon seems thicker. Some screen protectors are thinner but the package contains more than one. Whatever floats your boat. Just get a good-quality, matte one.

Using a screen protector to draw on iPad Pro beats drawing without one. I recommend matte, not glossy, because matte is the kind that has the tooth. Glossy may provide some traction, but less.

Is it like drawing on paper? No. If you want paper, you can use something that can work with real paper, such as the Intuos Pro Paper Edition or the Lenovo Yoga Book. But using a screen protector to draw on iPad Pro is closer to drawing on paper.

Summary
Article Name
Should you use a screen protector to draw on iPad Pro?
Description
You may love your iPad Pro screen, but it can be slippery as an ice rink. A screen protector offers several benefits.