The iLapis is a sleeve that you put on a regular graphite pencil to turn it into a capacitive stylus. It has attracted attention from sites from Tom’s Hardware to ProCreate to LaStampa TV.  Amazingly, it’s only going to cost a couple of bucks!

Not only that, but lets you use the side to shade and it gets pressure sensitivity via apps sensing its speed. It can be used on any tablet or smartphone screen. I spoke with the creator, well-known Italian comics artist Giulio De Vita, over email, about his vision for this unique and game-changing dream art tool.

Tell me a little about yourself. Who are you, where do you live? Are you an artist?
I’m a comic book artist. I’m quite well known in Europe. I worked for mayor publishers since I was 16 years old. But I love to go further comics, I use to work in advertising, cinema, animation, videoclips, theatre.

A real artist never says that it is an artist 😀

Do you usually use a tablet to draw and paint?
I’m a curious guy, and I love to search, try, experiment tools, techniques, artistic languages, media to express my ideas. When digital devices came out, like all creatives, I have been fascinated by these new supports… At the moment I think that they are still too limited to replace traditional artistic tools for fine art, but I’m sure they are a very good tool for standard level. I do not use a tablet for a final art, but I use it for fun, or to make sketches or studies. Paper is still present in my life and I use digital device and paper at the same time.

What inspired you to create the iLapis?
As I use paper and digital device at the same time, I need a unique took to work on both support without changing continuously… As a drawer I tried to sketch on tablet using traditional styluses: they were not precise at all, so I spent lots of money for active capacitive styluses (Adonit, Bamboo, and later Apple Pencil). They were too heavy, fragile, and most of all expensive…

I thought about Steve Jobs when he said that touchscreen are born for the use in mobility that’s why he never wanted to produce a stylus for these device: you can loose it, break it etc…

An expensive stylus is too dangerous to be used in a train, on a beach or at school or in a construction site… For these use you need something resistant, light, that you don’t need to recharge, that is inexpensive, and that if you loose, forgot at home, someone stole it, you can buy another anywhere: in any stationery shop or at a supermarket… even in a lost island in Greece or in small village in Iceland.  Like a pencil, but a real pencil.So I started studying if there was a way to let a normal pencil work on digital devices, and, EUREKA! I found it! 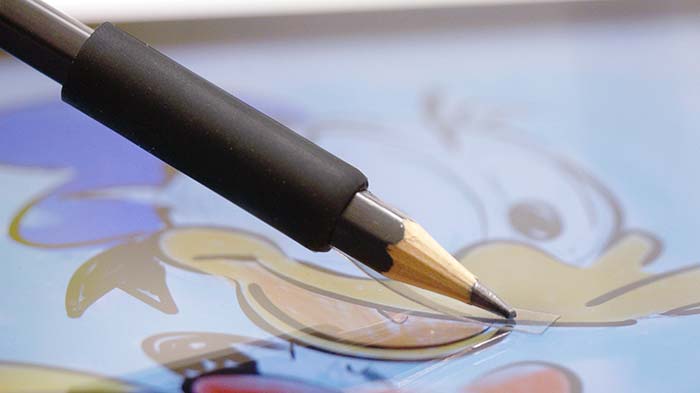 What do you hope to bring to the world with the iLapis?
First, it’s a romantic value, quite philosophic: the idea that an object that most people consider passed, like a pencil, can still say a lot. This can teach us that we shouldn’t give all for granted, because in the specific of iLapis a simple, inexpensive pencil is more innovative and performative than a hyper technologic and hyper expensive stylus.

Second is very important I think not only for artists, but most of all for children, who are more and more focused on digital devices. They can use to  keep the confidence of manual use, of the correct way to do traditional handwriting. Think about how important can be this product for playful teaching of writing.

Third thing, is for the pocket of the millions of people using smartphones and tablets in the world. iLapis is not only an excellent writing and drawing tool, but also a very good way to tap and swipe for people who have problems with their fingers (trembling or size, or simply the need to use gloves that make the finger touch impossible) or view.

What kind of challenges did you face in creating it?
The jungle of the patents’ bureaucratic procedures.

Is it difficult to get an item like this onto the market?
I think it’s difficult, because it’s new in some way, because it changes the perception of the capacitive stylus not more like a digital tool, but like a simple stationery tool. People thinks it’s a chinoiserie or a trick for its simplicity and low cost.

Is the iLapis your first product creation?
Yes, I used to customize artistic tools for my needs, but of course they were too specific to justify a production. I remember that some years ago I had fun to make a publishing project about impossible funny inventions (like the pillow that combs you while you sleep :-D) where maybe the idea of becoming an inventor has grown in my mind.

How does it work?
It’s really simple: it’s a transparent conductive film that you apply, through a grip, on the tip of the pencil to enlarge the surface of contact of the pencil to the touchscreen. The device detects this contact, like it was a finger, as the graphite of the pencil is a very good conductor like the human body.

You said you can use it with Apple Pencil. What happens?
That’s what I discovered recently: Apple Pencil works exclusively on iPad Pro, But if you apply iLapis on it you transform it in a universal capacitive stylus, so you can use it on any brand of touchscreen, size and model.

Does the iLapis work differently on iPad and iPad Pro? Does it get pressure sensitivity on iPad Pro?
iLapis has no battery, has no electronics parts, has no wifi or bluetooth connection: that’s what makes it different! (it’s nice to think that I “thought different” from Apple :-)) iLapis is the most precise capacitive passive stylus and the finest tip between all capacitive styluses (even actives), the one working at higher inclinations, the only one working on paper and touchscreen with the same tip

iLapis works the same way on any brand and model or touchscreen. It has no pressure-sensitive system, but drawing apps detect the speed of the gesture and interpret it as pressure with excellent result: I think that’s enough for a 5€ product instead of 100€ 😉

Tell me about your partnership with Perpetua.
Perpetua is the only pencil 100% made Italy (it’s incredible for the country of Leonardo, Michaelangelo, Caravaggio and Giotto)  with recycled graphite, ecological because made without wood, that draws underwater, that does not break when it falls, and that has been chosen for its values by G7 presidency as official gift for international delegations for the 2017 G7 summit that will be placed in Italy in May.

When I started the Kickstarter campaign I was contacted by Susanna Martucci, the brilliant inventor and entrepreneur of Perpetua, who saw many things in common of our stories and our products, and told me that we have to be partner. I’m very pleased of that, and I think we’ll make a long way together.

Does the iLapis work only with a pencil, not other drawing tools?
It works on any tool made in a material that is conductive.

Can you put it on a finger and use it? How about a stick?
Yes but I can’t see the utility of this, as iLapis is designed to use a fine tip on a touchscreen, and not a large finger 😀

Does the line get the texture of a pencil?
It depends on the app you use: you use a pencil, but the device read it as a normal stylus: through the app you can obviously chose any tool (pencil, pen, brush, eraser …) and colors (white, green, red, blue etc…) sharpness , opacity, dimension…

Does it matter how sharp the point is?
No.

Can you use it with a mechanical pencil, made of metal or plastic?
Yes, you need to have enough graphite inside the mine: if the mine is too thin (0,3mm; 0,5mm; 0,7mm; 0,9mm; 1,4mm) there is not enough capacitance to be detected by the device, if you have a large mine mechanical pencil it works good.

What drawing apps do you prefer to use with it?
My favorite are Procreate, Pen & Ink, Pencil,  Sketches, Penultimate and Notesplus.

What tablets does it work on? Does it work on Android tablets? What about phones? Touchscreens on laptops?
It works on any capacitive touch screens, of course it depends of the quality of the touchscreen and their apps. It works on trackpads too even if it make no sense to use it this way 😀

What will it cost?
The final price should be between 2,5 to 5 dollars, but it depends of conditions of distributions. anyway drastically cheaper than any other stylus.

Where and when can I buy one?
The Kickstarter campaign has just finished and unfortunately it has not be funded. Apparently it’s not a good sign, but I’m very happy about the result of the campaign. First of all I put a high goal of 33000€, that’s because I have to patent worldwide the idea and to set a mass production, and find a distributor.

That’s what I can’t do alone, and I need to find a partner to do that, I’ve never been intentioned to make handcrafted products. I want to do it seriously, because I believe in the product. Of course the mass of people out there doesn’t care a lot about the project, and care about the product.

The result of 7400€ is very good, and what’s more important for me is the big interest of the press about iLapis, and the enthusiasm of  people talking about it on the web… thats a really important approval rating for a product.

Now my concept is real and can be developed in a product. I hope very soon, with some improvements that I had in mind since the launch of the campaign.

What are your next steps, do you have more ideas for new creations or for the iLapis?
Next steps are to design a product that can be produced compatibly with Perpetua’s values (recycled material and 100% made in Italy) and then find a good distributor.
Thanks very much and congratulations on the iLapis!
Thank you for your interest.