If you haven’t gotten an iPad Pro yet, you’re just in time to get the second-generation one, which has some definite advantages for artists over the first. The lineup sees the 9.7-inch model replaced with a larger 10.5-inch version. The 12.9 inch iPad Pro 2017 size remains the same.

The cameras match the iPhone 7, which is a pretty big deal. In the past, iPads were way behind iPhones in photo quality. 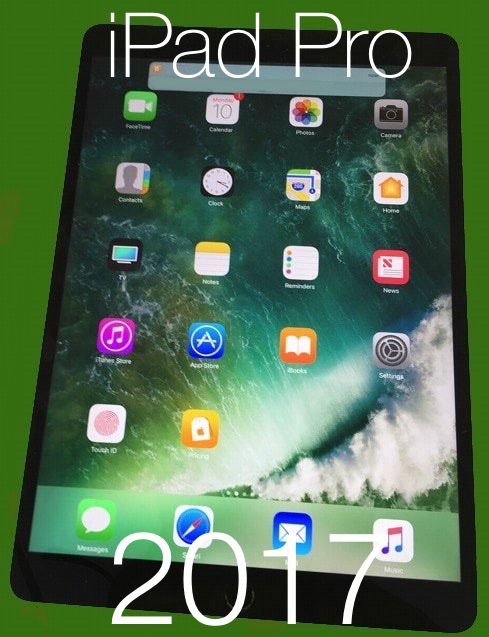 Both have a wide gamut DCI-P3 display, something the old 12.9″ inch model lacked, offering only sRGB. P3 is the same system used in digital cinema. It’s similar to Adobe RGB, though with fewer greens, and it’s an improvement over sRGB. Both new models’ screens shine at a very bright 600 nits. The 9.7″ iPad Pro had two color gamuts, including P3.

Both models now also have True Tone, which first appeared with the previous 9.7″. TrueTone detects ambient light, letting the iPad change the color of the display to look best with its surroundings.

The screens are each topped with two coatings, anti-reflection and fingerprint-resistant. Less than 1.8 percent of light gets reflected, making it easier to see in sunny or bright areas. Of course, the visibility depends how bright you keep your screen.

The larger dimensions of the 10.5″ now allows for a full-size on-screen keyboard, as well as a full-size layout for the optional Smart Keyboard accessory. And 10.5″ is bigger than it sounds when it comes to screen real estate than 9.7.” 10.5″ is a better size for drawing than 9.7″. (I like the 12.9″ one more, but it’s a bit less easy to throw into any old bag).

The 10.5-inch model’s borders are 40% smaller than the older 9.7’s, with the tablet still weighing just over a pound. The 12.9-inch iPad Pro’s borders are the same size as the original’s. This new model has a Wi-Fi and cellular version, supporting 802.11ac Wi-Fi and LTE Advanced, a boon for digital nomads. The 12.9 weighs a mere pound and a half. Both new iPad Pros have Retina displays with a pixel density of 264ppi, which hasn’t changed from previous iterations.

Apple’s new ProMotion technology is enables a refresh rate of up to 120Hz, double the previous models. So drawing with the Apple Pencil is now smoother with faster tracking, cutting down latency to 20 milliseconds, while also saving power by adapting the refresh rate to match what’s viewed on the screen.

The new models sport the A10X Fusion processor, consisting of a 64-bit six-core CPU along with a 12-core GPU with an M10 coprocessor also embedded. The company says the A10X has up to a 30 percent faster CPU and 40 percent faster graphics compared to the A9X chip. You can edit 4K video or render a 3D model quickly. While the A9X chip approached a laptop in processing power, the A10X beats out some.

The upcoming iOS 11 should bring welcome changes to file management and multitasking. It will become more like a Samsung Android tablet. There will be a file explorer and drag-and-drop features. (You’ll be able to put iOS11 on your older iPad Pro and some of the older non-Pros). The new operating system will being major changes and bring out the potential of the iPad Pro 2017 for artists.

The changes are significant, so if you’re in the market for a new tablet anyway, Apple is now doing even more to keep creatives in its ecosystem.The faster chip means you can do more with 3D and video. Art apps, especially those that let you mix colors, such as Paper by 53, will benefit from greater color accuracy.

The older iPad Pros are still fine, especially if drawing and sketching is your main interest. You’ll still be app-dependent, so if you want to run full Photoshop, you’ll need a laptop or desktop. But with mobile apps getting more and more powerful, you might start leaving your laptop at home.

See more info and reviews of the 2017 iPad Pro (Amazon)

See our choices for the 11 best art tablets