Lenovo AnyPen: Want a tablet with stylus? Grab a fork

Lenovo’s AnyPen is an enticing idea. Available on the Yoga Tablet 2 with AnyPen and some others of the company’s small, general-use tablets, this technology allows you to use just about, well, anything, as a stylus, except something made of pure plastic. Lenovo recommends using a pen or wood-and-graphite pencil. So now you can have a tablet with stylus even without a stylus.

This article is a look at AnyPen as an example of advancement in pen tablets. AnyPen tablets do not have pressure sensitivity or palm rejection.

Rather than using Gorilla Glass, a strengthened glass is used to protect the screen from scratches inflicted by the writing implements.

You can get a fine point with these implements, making it easier to get precise input. On a non-Pro iPad or other capacitive tablet, to use a fine point you need to trick the screen, for instance with those styluses that have a plastic disc around the tip.

With AnyPen technology, no such trick is needed. You can use a stylus, a real pencil, a real pen, a carrot, a banana, a hammer, your finger, a screwdriver, or a stick as an input device. Just as long as it’s not pure plastic, most materials will work. Lenovo has said it’s not expensive, and they added it to the Yoga Tablet 2 without hiking up the tab a whole lot.

This is certainly useful for notetaking, sketching, and technical drawing. The Tablet 2 even lets you hang it up, for instance in a garage or workshop. So you can grab a Philips-Head and draft up some plans for that new shelving.

AnyPen uses a capacitive touchscreen, not a resistive one.  A carrot has skin, and thus is not all that different from a finger. But getting a stick or graphite pencil to work is a feat on Lenovo’s part and redefines the idea of a tablet with stylus. The company can be maddening with its confusing product releases, but they are doing some real R&D. 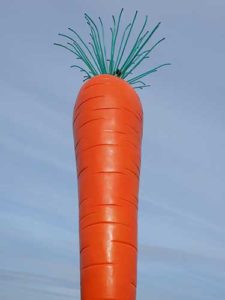 You can use a carrot as a stylus.

They aren’t the only company doing something like this; the Panasonic Toughpad FZ-M1 can also be used with a pencil or metal implement.

The touch controllers in these have a very high signal-to-noise ratio, making them recognize objects as small as 1mm, whereas most capacitive screens require at least a 5mm stylus. The non-Pro iPad, with its low signal-to-noise ratio, cannot recognize a fine tip unless it has a plastic disc around it. That’s why you have to use a squishy stylus on that kind of tablet; it’s large enough to drown out the noise, so to speak.

With AnyPen devices, you don’t have to press down hard at all to get a mark. On the downside, one user reported it was recognizing the entire tip of the pencil, skewing the line.

The Lenovo Yoga Book has a pressure-sensitive Wacom tablet in the black part, which also has a disappearing/reappearing Halo keyboard.

Not up to speed for art

Tablets with Lenovo AnyPen are not art tablets per se, since there’s no pressure sensitivity or palm rejection. But for those who geek out on pen tech, it’s a fun concept.

It would be great if a pressure-sensitive tablet came out with this feature, especially with a larger screen. Imagine if you could still be productive after dropping your digitizer pen down a storm drain. Hopefully, you keep some spare pens around just in case.

Lenovo has released AnyPen on Windows tablets and Android.

It’s certainly useful and cool, but artists will want to stick to their pressure-sensitive styluses.

If you want to read more about the tech, check out this post on the Lenovo blog.

End of Lenovo AnyPen: all the world’s a stylus

Summary
Article Name
Lenovo's AnyPen tech lets you use anything as a stylus
Description
Lenovo has put AnyPen technology into some of its small Windows capacitive-screen tablets. These don't have pressure sensitivity, but they expand the reaches of tablet tech by letting you use anything--an ink pen, wood and graphite pencil, screwdriver, or vegetable, as a stylus.
Author
Tablets for Artists
Publisher Name
Tablets for Artists
Publisher Logo