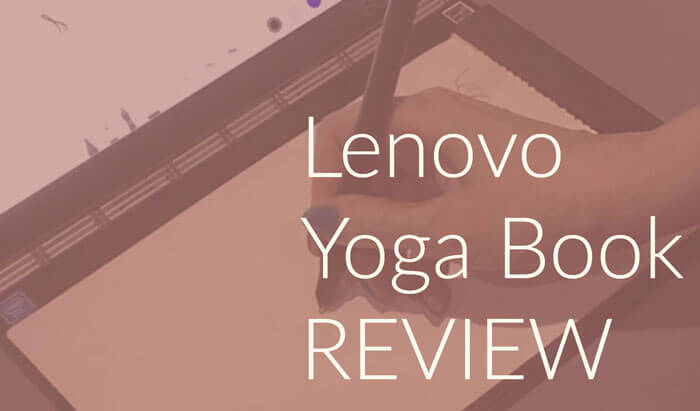 A while back, I wrote a fairly detailed Lenovo Yoga Book article when the product was announced, including specs. So here I’ll focus on my experience with it.  I have to say that it was as expected, and in some ways better–it’s a cool and very portable device that delivers in the art area. It comes in both WIndows and Android versions. 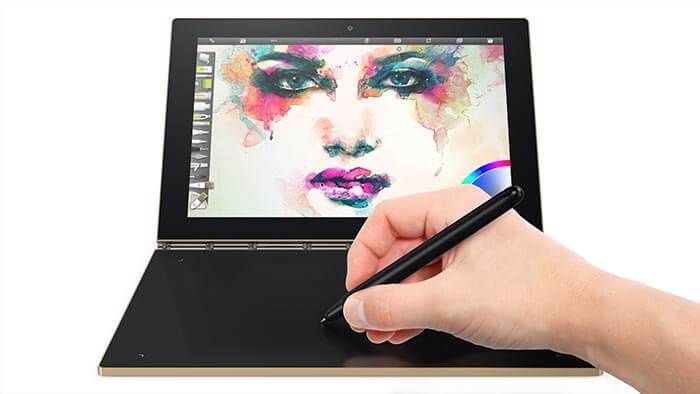 The Windows version comes only in black, while the Android Yoga Book’s hues are black, gray, and gold. Perhaps that’s a clue that they expect to sell more of the Android.

Needless to say, the Yoga Book is really cool-looking and the hinge is beautiful, with a bit of Steampunk sensibility. Lenovo is known for its utilitarian style. Here, the design has lightened and become whimsical.

As with all Yogas, the device bends into myriad poses. The smallness of it makes posing it easier and more fun than with the large ones. The large bezel lets you hold it without touching the screen, and visually sets off the display from its surroundings.

Tent pose would be great for showing your portfolio, letting an art director finger-scroll through your work. Or you could prop it on an airplane tray table and watch a movie. 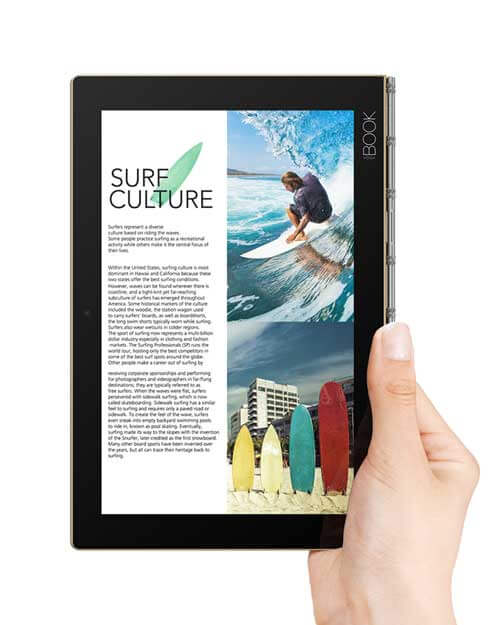 There’s a micro-USB and micro-HDMI, a conventional mic-headphone jack, as well as a microSD slot for a card up to 128GB. There’s no USB-C. To use USB peripherals, you will need to provide your own adapter, such as a USB to Go. You won’t be able to simultaneously charge the computer and use a peripheral unless you use a USB hub.

While some people are wishing for more ports, they wouldn’t fit into the skinny tablet body that gives the Yoga Book such great portability.

It’s a bright 400 nits. It’s just HD, but I think at a small size, that matters less than it would at a large size. It also makes the battery last longer. Lenovo reports 70% of Adobe RGB though some places are finding up to 90%. It doesn’t have professional-level color accuracy, but is fine for a digital sketchbook.

You can write or draw on the multi-touch Lenovo AnyPen touchscreen with the stylus tip of the Real Pen, or with anything conducive, from a fork to a banana, because the screen uses Lenovo AnyPen. The one thing that will not work is pure plastic. No matter what, though, you won’t get pressure sensitivity or palm rejection on the screen.

At about 1.5 lbs., it’s very light and easy to carry in a small bag. The Yoga Book feels more like carrying a paperback book or Kindle with a protective cover. To compare, a 13″ MacBook Air weighs about twice as much. I find my MacBook Air starts to feel heavy after a while so if I have to cover a lot of ground I leave it at home.

Since the Yoga Book is a clamshell, the screen is protected. This means savings, as with an open tablet like an iPad, you have to invest in serious armor or padding.

Comparatively, the large iPad Pro weighs about the same as this, and the small one less than a pound. But then you have to figure in the weight of a case, and the Apple Pencil adds about 3/4 ounce.

Light as the Yoga Book is, though, you also have the paper pad, pen, and additional nib to carry around. There’s no silo for the pen. So having a sleeve that holds everything, and closes would be a good solution. 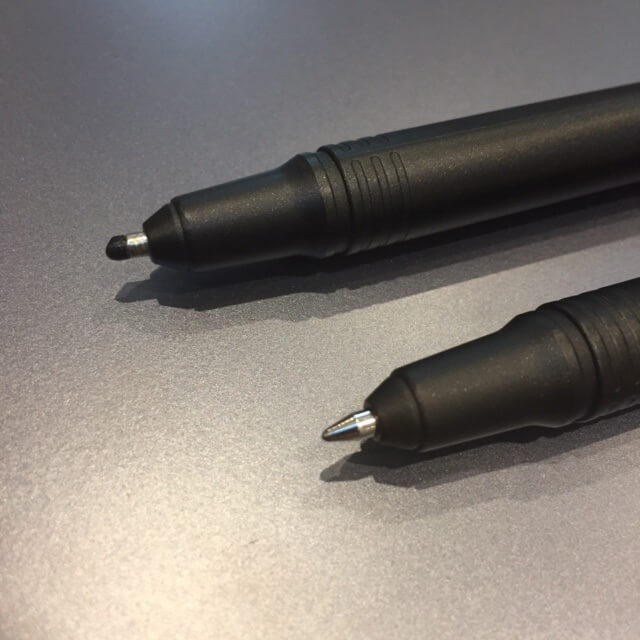 The Yoga Book Real Pen is a batterlyess, Wacom EMR pen with 2,048 levels of pressure sensitivity and 100 degrees of tilt. Lenovo tried over 200 pen designs to get one that fulfilled the Real Pen’s dual functions. While on the large side, the pen is light and comfortable to hold. There’s no eraser tip, so you’ll need to use your program’s eraser brush. 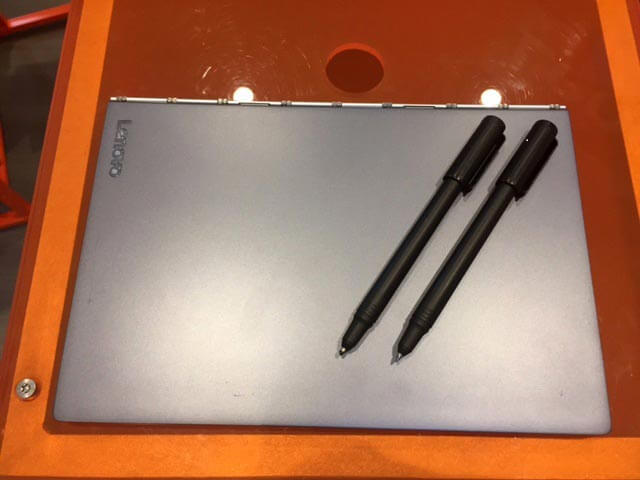 If you want to draw for a while on the Create Pad, then change to drawing on the screen, you switch out the nibs, from the digitizer nib to the real ink nib. To switch them out requires using a little hole in the cap to pry out one nib. It’s reminiscent of the hole in the top of the Intuos that you use to pull out nibs.

Notice the fine tip of the top pen, which is the stylus to use on the AnyPen screen. The tip is coated with conduction polyoxymethylene (POM). 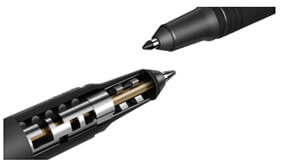 If you’re a frequent switcher, getting an extra pen isn’t a bad idea. If you don’t like the nib remover you can use a ring one that comes with a Wacom pen. (photo illustration by Lenovo) Or, you can use just about anything to draw on the screen.

Drawing on the Yoga Book

Here is a super-short pen demo. You can see how the line appears with my pen strokes with no lag. This is just one layer, though. If you have a very large file, you could get some lag as the Atom processor catches up.

The Create Pad is the black drawing tablet. Pushing a button switches it to stylus mode from keyboard mode.

Drawing is where the Lenovo Yoga Book shines. The Creator Pad is very responsive, perfectly mimicking what you draw or write. The Wacom digitizer works great, offering 2,048 levels of pressure and 100 degrees of tilt. There are no hotkeys. 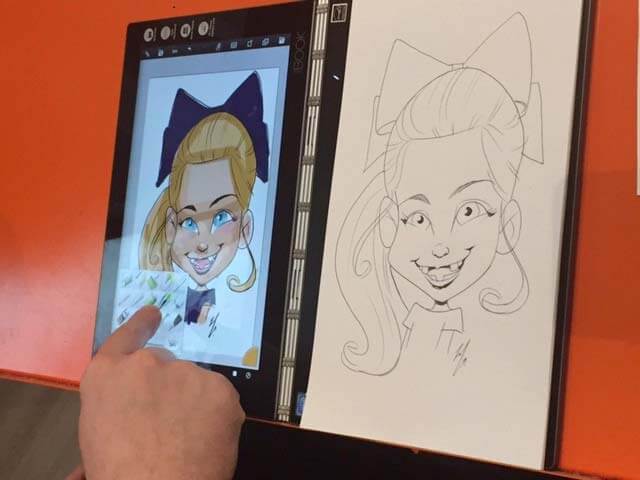 It would be nice if the EMR pen offered nibs other than a ballpoint, but it has to conduct electricity.

There is something nice about getting back to paper.  I found myself keeping my eyes on the paper, whereas with a graphics tablet you have to look at the screen. (Though the new Intuous Pro includes a paper option). If the paper or just the novelty of it inspires you to draw more, than that’s a good thing. You can use any normal paper. To get retro, you could use tracing paper to build up your drawing on paper.

If you didn’t bring paper, you can draw straight onto the Create Pad with no paper. TheCreate Pad is actually the surface of the drawing tablet, not the paper pad. Then you can wipe off the ink. Similarly, you could use the ink pen on the AnyPen screen then wash it off. But I don’t like washing off ink, so I stick to the paper and Real Pen tip.

The ink refills are regular ink refills. You can buy them at stationery stores or from Lenovo or other places. 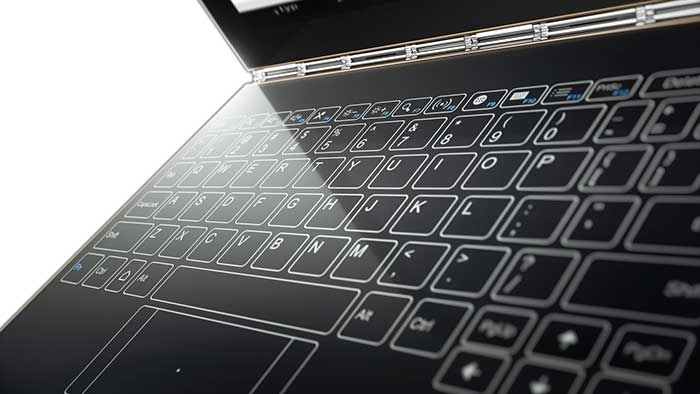 The keyboard is cool-looking, but difficult to type on, not a whole lot better than texting or typing on an on-screen keyboard. There’s a vibration when you hit the keys. It’s not good ergonomics to type on a flat keyboard. The haptic vibration may help you reflexively not strike as hard, but I’d still be careful and use this just for emails or short items. The size of the keyboard is also challenging to type.

I asked Lenovo if they considered adding more keyboards, such as those for other languages, but they said that wasn’t a possibility right now, since the keyboard is etched in.

Lenovo estimates 12-15 hours, which is really long; realistically, using art apps,. 9 for Windows and 11 for Android. The device doesn’t get very hot.

Since the processor is Atom, there’s no point in trying to run heavy-duty programs such as Photoshop or Gimp. You can use them but only in the lightest way before you run into problems.

The Yoga Book comes bundled with a trial of ArtRage Lite, a versatile art program with loads of realistic brushes and effects, even glitter and impasto. It’s a very affordable program to purchase. 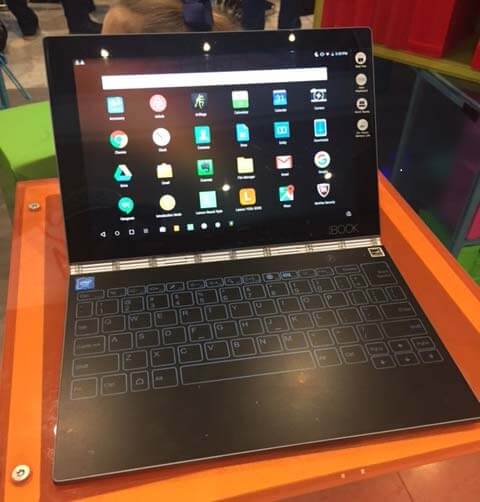 The hardware for both are the same. The one difference you can see is that on the Android, you can’t see the touchpad as well because it isn’t outlined; there are just markings on the corners.

With the Android version you can use any app in the Google Play store, such as Procreate. With Windows, you could use ArtRage desktop, Photoshop Elements, Sketchbook Pro, Mischief, Krita, Sketchable, and other art programs that are not too resource-intensive.

Which is best? If you’re used to Windows, you might want to stick with the familiar. But the Android actually has more going for it. The Yoga Book is a tablet-first laptop. Its specs are low for a Windows machine, but high for an Android tablet.

The Android version lets you use anything in the Google Play store, including Procreate, Sketchbook Pro, Photoshop Express, and tons more. The Android apps are smaller, hence run faster. In the Android you can turn off the screen to save battery while you draw on the Create Pad, with the image still getting digitized.

In the Windows version, there is two-fingered scroll. You will also get Windows Ink and handwriting to text. And you can use Microsoft Office or Open Office. However, if writing is your main thing, I doubt this can replace a full-size laptop. 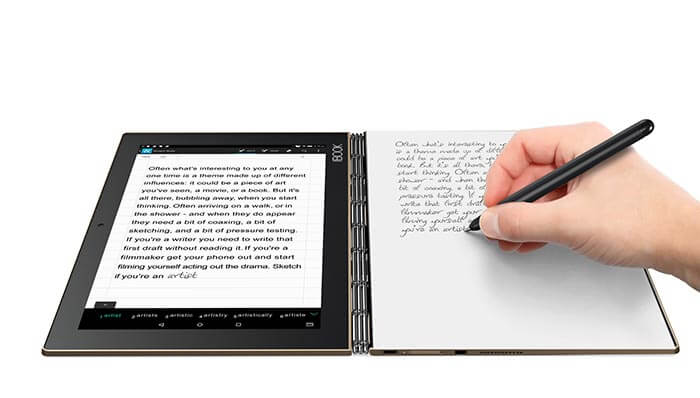 Converting handwriting to text on the Yoga Book.

All in all, the Android is  bit better, but there’s not a huge difference, so get whichever one you’re more comfortable with. Just realize that large Windows applications aren’t going to work well. There are Windows mobile apps (the apps formerly known as Metro) in the Windows Store, but nowhere near the amount for Android.

A lot of people are enjoying this tablet. Some Lenovo Yoga Book reviews say the Dolby speakers are louder in the Windows version. Some are also reporting problems with pressure sensitivity in full Photoshop and Corel Draw, but I think those are too large to run on this tablet anyway. The device seems to be sort of “comfort food” for some users.

The biggest sticking points are the trackpad and keyboard.

The design of the Lenovo Yoga Book is excellent, the hinge is beautiful, and it’s fun to tote around and show off. It’s a neat digital sketchbook, and nice to have a graphics tablet that’s already connected without dealing with cords.

You could get a Wacom Spark for less money if your main goal is to digitize your ink drawings as you draw.  If you want a very portable device to draw and do light typing on, the Book is a fun, versatile digital sketchbook. The main draws for me are the si

What the Yoga Book has done is combine a bunch of functions. Some call it gimmicky, others just enjoy it. I think there’s a bit of that old Apple charm going on here–though it may not give you a ton of power, it’s got a certain charisma and ease of use that’s getting it a lot of fans (and some detractors).

This functions somewhat better with Android, but go with your needs and preferences.

This artist, Arthur Walker, has created this great time-lapse video of drawing on the Yoga Book. He has even mastered touch typing.

See the Lenovo Yoga Book  (Android and Windows) on Amazon