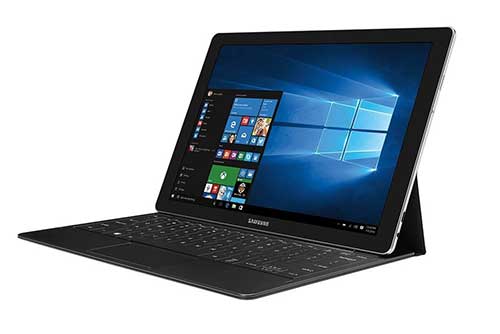 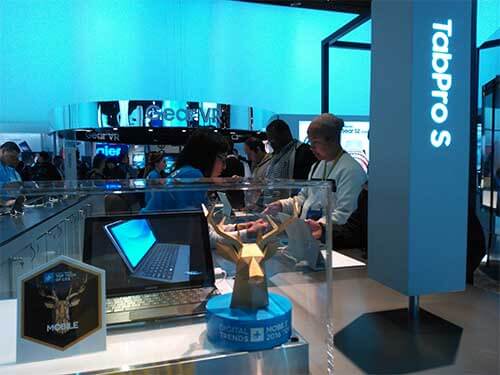 The TabPro S is joining a growing population of Windows 2-in-1s. This type of tablet is all the rage, because it turns out lots of people want a portable device that works well for both entertainment and productivity. Active pens have really hit the mainstream.

Non-Pro iPads and other mobile tablets are most useful for entertainment, full, 64-bit Windows and a pen gives a lot more options. It can replace a laptop and tablet and fit neatly into your bag or briefcase.

You can use desktop programs as well as Windows apps (formerly known as Metro apps). The very high-res screen is the first OLED for a Windows tablet. So this is a milestone. Previously, they have been in smartphones, Android tablets (mostly Samsung’s), monitors, and just recently came to laptops. 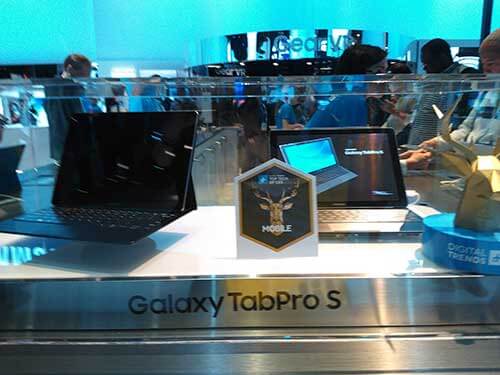 The Samsung people at CES told me there was not going to be a pen, though one of them said maybe. So either the pen was a weakly-kept secret, an agonizing decision, or an afterthought for them. I didn’t expect to be writing this review.

It’s the big MacGuffin here. Not much is known about it except it is pressure-sensitive, it probably won’t be a digitizer we’re familiar with, and that it uses Bluetooth.

Update: The pen has come out.

There’s just a USB-C port and a headphone jack. No micro SD, nothin’. The 2015 MacBook also has this single-port feature and also faced criticism about it, but maybe it’s the future. Samsung says they’re going to release an adapter. Meantime, there are other adapters, but not that many peripherals for the USB-C.

The tablet may be ready for the future, but for now, users are the ones who need to be ready.

On the plus side, the USB-C offers FAST charging, just 2 1/2 hours from zero to full and the battery optimally lasts up to 10.5 hours on this charge.

The display is bright with excellent viewing angles. The colors are more saturated than we generally see.

The colors are rich, and the blacks very deep (because there is no light where there’s black with the OLED),  with great contrast. But this is is made with something called PenTile subpixels, which makes it so the resolution is effectively not quite as high as it says, and there’s a little too much green. Lots of people have been oohing and aah-ing over the display. I just prefer a regular LCD.

The screen is smooth and somewhat glossy, but not high-sheen. It doesn’t reflect so much light that you can’t see the display. Its 400 nits is very bright.

The bezel is relatively narrow, but provides enough of a visual “frame” that makes your artwork pop from the background.

The 3:2 aspect ratio is less oblong than the usual 16:9 or 16:10, and preferable for drawing. Portrait mode is more in proportion to a regular sheet of paper. 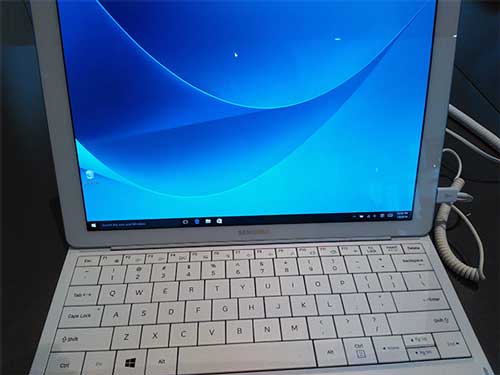 TabPro S in white. Note the closeness of the keys.

The machine is snappy and responsive, with apps opening quicky. Scrolling is peppy even in memory-intensive Chrome.

You can run full Photoshop CC with the TabPro S, but you may experience some lag when running heavy graphics, such as filters with high-res files. With 4 GB and a Core M3, it’s not powerful enough for heavy use of Adobe Suite, you would need at least an i5 and 8 GB.

I have no complaints about the RAM and storage, since this is a portable tablet of a certain class and fulfills its duties well. A close cousin is the entry-level Surface Pro 4, which also has a Core M processor but has a lot more ports and a better keyboard.

It would be nice if the battery were replaceable.

The machine is suitable for light gaming.

The build is solid and feels and looks premium, with a metal frame. The TabPro S is almost as sleek as the luxe Galaxy S7 phone. The tablet’s back is a not-unpleasant black, rubbery, matte plasticky material that is very grippable and lowers the chance of dropping it. And the rubberized texture is not a dirt/fingerprint magnet.

I don’t know how much the rubbery surface protects the device in drops onto its back, but it probably provides a bit of cushioning, along with the cover.

Upright position shows off the thinness of the tablet. Keyboard is not backlit.

Unlike with the Surface Pro line, here, a keyboard dock is included. It’s held on by a Pogo connector in the bottom center edge of the tablet. Once connected, it’s pretty stable, and doesn’t seem to cause lags or skips when typing.

The cover only takes two positions. It’s a trifold, similar to the Apple Smart Cover. It’s thin, but seems durable, and the design is clever: the cover wraps all the way around the tablet, protecting it from light mishaps.

The angles of  two positions are decent, but, they only work in Landscape mode. If they really had an art tablet in mind, maybe they would have designed the cover for Portrait position, too.

The cover’s square camera port lines up well with the camera. The whole tablet has straight lines, except for the rounded edges.

Typing on the keyboard

The keyboard wasn’t really to my liking for typing, I prefer island-style keys. There’s almost no space between the keys, they don’t have great travel at 1.4 mm, which is a bit low.  I also don’t love the look. It was challenging to type accurately. There’s no requirement to use the keyboard; a separate keyboard would work too. 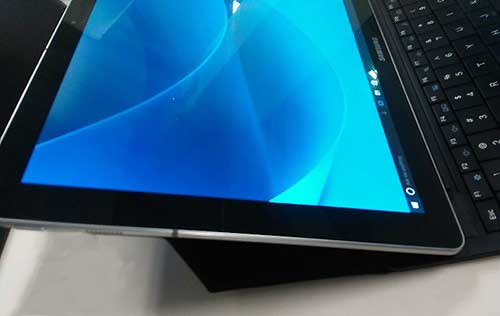 The keys are larger than most, but to me that doesn’t really help with accuracy. It might be a good for thick-fingered folks. The whole thing feels a bit floppy. It’s similar to the old Surface Pro Type Cover, except that one sat at an angle and this one is flat on the table, and the stand had more positions.

The trackpad works fine and works with Windows touch gestures.

You can use the TabPro S with  the keyboard on your lap, but being so light, it’s not super stable, and may cause worries about it falling. If you get really into painting and move like a digital Jackson Pollack, sitting on a wide, soft surface may calm those anxieties.

The color gamut is standout. It covers 95% of Adobe RGB and  full (or more than full) sRGB, similar to the Vaio Z Canvas  (an N-trig tablet PC with an IPS screen) That makes it suitable for artists and photographers to use it to make their own prints for professional print work, provided they have a strong understanding of color correction.

Without that understanding,  the color gamut can be a source of confusion. According to DisplayMate, a trade organization, “OLEDs currently have the opposite problem of traditional LCDs, too large a native color gamut, which requires color management in order to deliver accurate sRGB/Rec.709 colors.”

If you’re a professional artist, you probably use a printer that uses Adobe RGB or, for photographers, ProPhoto RGB. Consumer printing is mostly done in sRGB. sRGB is also the standard for Web colors.

The high gamut can really make your work pop, and you can adjust settings to avoid the high saturation that can occur. There’s also an sRGB setting. The settings panel also gives you choices of how long the screen will remain bright before it auto-dims to prevent screen burn-in, which can be a problem with AMOLED screens.

Many love the saturated colors of AMOLED, but they are a bit hyper-real.

No, it’s not a psychological state, it’s a feature. If you’ve got an unlocked Galaxy phone, you can unlock the tablet by scanning your fingerprint, as well as easily turn on the phone’s hot spot and sync notifications.

Most users who have penned a Samsung TabPro S review so far seem to be enamored with the lightweight 2-in-1, calling it speedy and able to handle a lot, and they like the sound quality and the rich display.

One pointed out its use as an e-reader for, ahem, ageing eyes because of its deep contrast. (I still prefer e-ink for reading, because it has less contrast and less glare than a computer).

The biggest complaint about the tablet is about the keyboard. The second biggest is the lack of ports. Wouldn’t it be nice if they included an adapter?

Just one port, USB-C
Keyboard cover sits in only two positions
Keys a bit clunky to type on
Keyboard not backlit
Stand only adjusts in landscape position (as with most keyboard covers)
Limited to 4GB
Not everyone likes AMOLED display color
Can’t replace battery (typical in tablets)

If you like the screen, then this is the only Windows tablet that’s got it. If you don’t mind the single port, or find the simplicity is appealing, this may be for you. There really are a lot of pros, and the cons are not so bad.

The tablet is pretty peppy and the wide color gamut is appealing. Is the TabPro S overall better than its main rivals, the entry-level Surface Pro 4 and the iPad Pro? I don’t really think so, but the pen will be a a major factor.

But it has got its own unique character, and the field is getting wide enough that there’s something for everyone.

Here’s a video of a Samsung spokesman showing the tablet in action. You can get a full look at the keyboard cover.

See more info, reviews, and price for the Galaxy TabPro S on Amazon