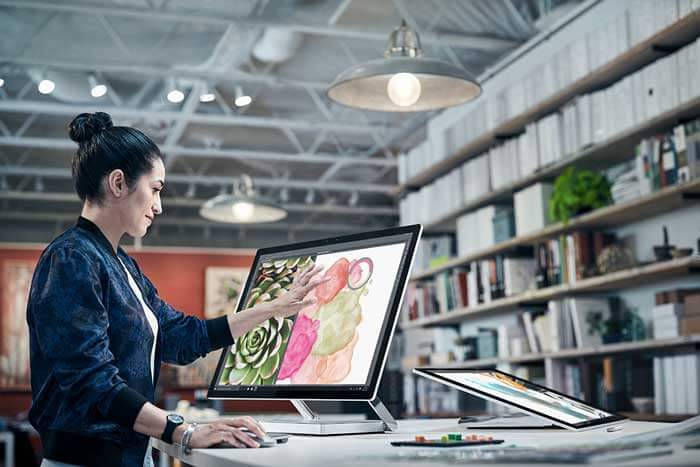 At work using multitouch on the Microsoft Surface Studio.

Along with the refreshed Surface Pro 4 with Performance Base, Microsoft has just released this large all-in-one, the Surface Studio, that will go nicely with a Starbucks Trenta (that’s the 31-oz. cup). How big is it? It’s 28″ and has lots of features, including four input methods for the touchscreen–with all that caffeine, you’ll be as productive a semi-octopus. I got to try it out and penned this Microsoft Surface Studio review. 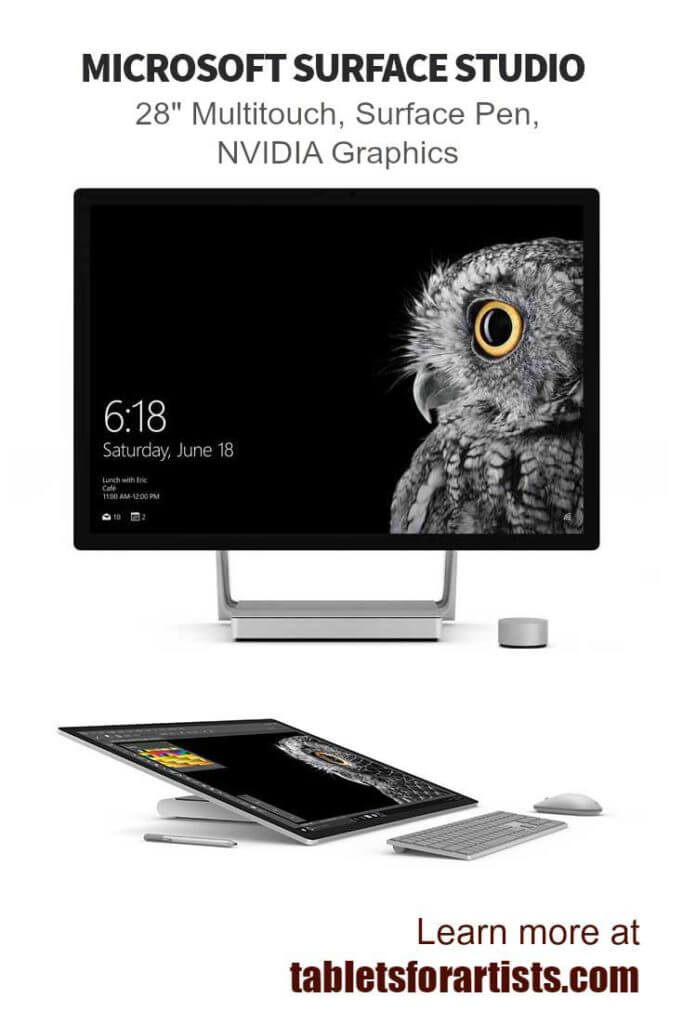 The Microsoft Surface Studio has an amazingly thin, 12.5 mm 28″ PixelSense screen with 10-point multitouch and comes in models from i5 with 16 GB to i7 with 32 GB RAM. With a light touch of the Zero Gravity Hinge, the screen folds to any angle down to 20 degrees, similar to the angle of a drafting table. This is positive, because 20 degrees is the best angle for ergonomics–it’s “neutral” on your wrists.

The GPU options are 2GB NVIDIA GeForce with 1 or 2 TB memory. You should be able to have lots of fun and games on those. It even has XBox Wireless built in. Though its primary use will likely be art and design, can use it as an entertainment center, art studio, monitor, or very expensive drafting table.

The lower-end models of the Surface Studio, if you can call something this fancy lower-end, use the GTX 965M and the highest-end one has the GTX 980M. Both of these are from last year, and considerably less powerful than the latest GTX 1070. So if you’re working in CAD programs, it won’t be the fastest that’s possible. For Adobe programs and most 3D use it would be fine.

The Surface Dial is a sleek-looking puck that reminds me of gizmos of the future from the movie Sleeper. You place it on the screen, where it can open up the Radial Menu, or use it as a color picker. It’s even got haptic feedback. You turn it to access various settings, such as opening up menus of tools, palettes, or brush options. The dial has a black magnetic bottom that gets some traction on the screen, but doesn’t stick like a refrigerator magnet, you have to hold it.

The curvy Surface Mouse also can be used directly on the screen. So there are four possible touchscreen options–the mouse, the dial, the pen, and your fingers. Perfect if you like to accessorize. The Dial may feel gimmicky, and if you’re into keyboard shortcuts, turning the Dial may slow you down. Others may enjoy its tactility.

Adobe didn’t work with Microsoft on the Radial Menu, so it doesn’t offer granular support for the programs, and it’s not customizable in the same way as Wacom ExpressKeys. You make adjustments in Windows Settings. The dial will work via Bluetooth with the Surface Pro 3, 4, and Book (Surface Pro 3 and up) but the on-screen functions will only work on the Surface Studio.

It’s not that easy to say what the advantage is over something like the Wacom Feel Driver’s on-screen radial menu for tablet PC. That’s not an option for the Surface, but if you prefer an easily accessible on-screen menu, you might want to try the Tablet Pro app. 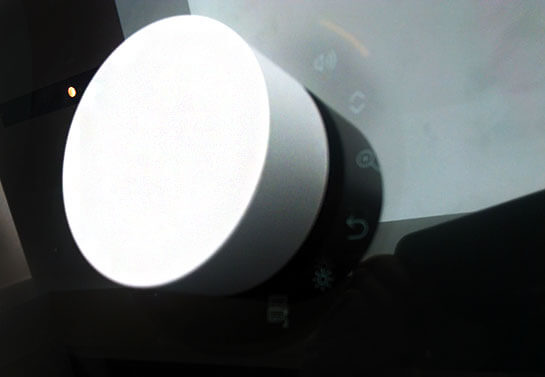 The power cord comes with a release grip, which is convenient since you might not be moving this around that much.

The screen is glossy, and if you don’t want that you’ll probably need a custom-made screen protector. With 13.5 million pixels, it’s 63% over 4K. Or, since the Surface Pen has a variety of nibs, some of which provide some bite, you could draw with one of these nibs. You can quickly switch color profiles, which are individually calibrated.

The sharp resolution, individualized color profiles, endless angle adjustability (to 20 degrees) and inviting 3:2 aspect ratio all make quite a feast for art. Adobe RGB Is not specifically supported; instead it’s DCi-P3, 25% larger than sRGB and similar to the iMac Retina.

Not much. But at around 21 pounds, it’s more portable than some desktops. And it looks really nice. The Bluetooth keyboard is full-size but light, with good key travel.

The Microsoft Surface Studio is basically a huge Surface Pro 4 with higher specs. Storage won’t be a problem, at least not for a while, with 1 to 2 terabytes.

Drawing on the Surface Studio

The Surface Pen is included, and gets 1,024 levels of pressure sensitivity via its N-trig digitizer, and same with its eraser end. That’s a far cry from the new, compact Wacom MobileStudio Pro‘s 8,192 levels, but hey, who’s counting. 1,024 is plenty and enough for a smooth pressure curve. S

However, compared to Wacom’s offerings, the Surface Pen isn’t quite there in terms of fluidity, and there’s no tilt or rotation sensitivity. It also requires more pressure than a Wacom pen to make a mark on the screen.

With something this expensive, it’s disappointing to not have tilt. It seemed like less of a compromise in the smaller Surfaces, since those were portable and could replace laptops and tablets. But this is a studiobound art tablet. It has lots of redeeming features, including the thinness, hinge, and relative lightness, as well as all the other good stuff (like the way over 4K display). This could work very well for photo editing.

The Zero Gravity Hinge  with 80 custom-set springs feels wonderfully weightless and the screen simply floats up and down, coming to a firm rest at 20 degrees–it doesn’t go all the way flat. As with the computer’s smaller cousins, the Surface Pen sticks magnetically to the upper-right side of the frame.

The screen is glossy, but not glarey and it doesn’t feel too slippery. It didn’t bother me that there was no “tooth” or screen protector.

The Studio would suit some people great, but others might prefer something Wacom. You can read some creatives’ reactions to the Studio in this Endgadget article. One who gave a quick Microsoft Surface Studio review lamented the lack of tilt sensitivity.

Pricey (though Microsoft says it’s a great value, and you are getting a lot, but still)
Lack of tilt sensitivity for pen
Processor not the fastest or latest

I’m a bit wary of investing this much into an all-in-one, because of the speed at which computers obsolesce. You can keep a Cintiq around longer than the average computer, and Cintiqs hold their value longer. The Cintiq Companion 2 and the Wacom MobileStudio Pro can be attached to a larger monitor so that you can draw on and see your creation on the larger screen.

The Surface Studio is not the first large all-in-one, but it’s certainly the most powerful. Some Wacom-alternative companies have put out all-in-ones but they are seldom seen, and don’t have high specs like this one.

The Surface Studio has great build quality. Its hinge is graceful. There are plenty of ports. It’s gorgeous and would wow clients who walk in–which can be quite valuable.

If size and power are what you need, and you want the convenience of the hinge, this might be all you need.

Get a free Surface Dial with pre-order: Shop Surface Studio