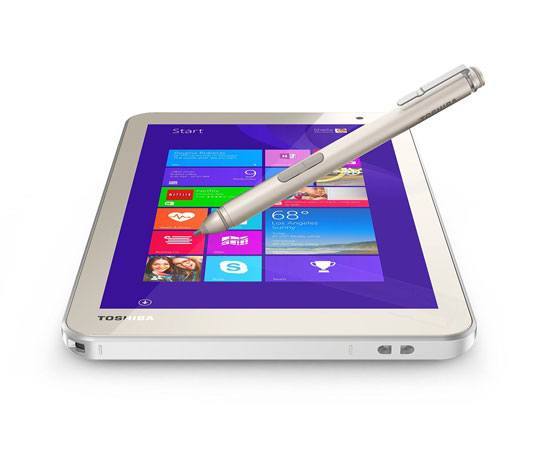 About the Encore 2 Write

If Toshiba’s new Encore 2 Write is the shape of things to come, then this is an encouraging time to be a digital artist. The Encore 2 Write was featured at the 2015 Consumer Electronics Show (CES),  an annual international convention held in Las Vegas that showcases the latest in gadgety innovations.

This tablet’s price point and features are comparable to the Asus Vivotab (read our review), which is no longer being manufactured. The Write is newer and has received more favorable reviews than the Vivotab. Like the Vivotab, it’s a portable tablet that runs full Windows 8.1 and has a Wacom digitizer. While the Vivotab gave you 1,024 levels of pressure sensitivity, the Encore 2 gives you the maximum, 2,048. The VivoTab only had a thin pen, but the Write has a full-size pen; the tablet does not have a slot to old it. Unlike Wacom pens for the Cintiq and Intuos tablets, the Encore 2 Write’s stylus takes a battery, size AAAA. The battery should last a few months with regular usage. It has two hi-res cameras and dual mics.

The digitizer is not EMR (electromagnetic radiation) like a Cintiq. Instead, it is called “Active ES” (electrostatic) digitizer, which makes for a lighter tablet, as an EMR tablet requires a separate layer. The ES is a capacitive digitizer that is in front of the LCD screen. It’s somewhat like the N-Trig, and the metal pen that resembles a ballpoint pen also has the feel and look of the N-Trig pen. The screen is touch-screen and you could use it without the pen.

Though the Encore 2  does not currently support Wacom’s Wintab Feel It driver, which allows you to get pressure sensitivity in all the art apps that support it as well as map the pen,Wacom has unofficially said it will be getting this valuable feature. The Surface Pro 3 with its N-trig “dual sense” does not have this feature. The ES digitizers could in the future be the norm for lower cost (under $1,000), more portable, lighter-weight tablets.

Drawing on the Encore 2

With some programs  you will get an initial blob, as with the Surface Pro 3, as the tablet decides whether you are touching it with a finger or pen. The pressure curve is very good. The hover is a bit higher than on the Surface Pro 3, so it might seem like the palm recognition isn’t quite as good, but it works. The “hover tracking” is better, so there is less parallax with this than the Surface Pro 3. According to the video below, shot at CES, the initial activation force (geekspeak for how hard you have to press on it) is a light 3 grams. The line does not get jittery around the edges as it would in a Cintiq or the Vivotab. Both the N-trig and ES are fine even right near the edges. The pen provides some “bite” which gives a paperlike feel.

The screen resolution is not that high, but for this price you would not expect it to be. 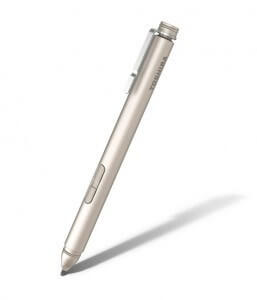 The metal TruPen is fine-tipped, “pro grade,” and takes a AAAA battery. The eraser is a button on the side. The palm rejection kicks in when the pen is hovering at about 3/8″ above the screen.

Windows 10 will allow desktop apps on tablets 8″ or over. You can run desktop apps on this, since it’s a full Windows tablet, but it’s a little hard to use Photoshop since the tablet is small. As well, since it is an Atom processor, doing serious digital painting in Photoshop could be laggy, though basic image editing is OK. What will work best are apps such as Fresh Paint and the Sketchbook Express app, which are optimized for a tablet. One user who wrote an Encore 2 Write review praised using Manga Studio (desktop) with this, so by all means, try it.

The tablet is centered around note-taking. It comes with the preinstalled apps TruNote, TruCapture, and TruRecord. TruNote lets you take and organize handwritten notes, TruCapture is to take hi-res photos of text in books or from a blackboard, chalkboard, or whiteboard and do OCR, and TruRecord lets you record sound. There is an organizing and tagging system, kind of like Evernote. So you can not only draw on it, but use it as a multimedia creative diary.

Microsoft Office and OneNote work fine with this tablet.

Many people enthusiastically recommend this tablet as a digital sketchbook. One Encore 2 Write review praised its ability to work with Manga Studio. The high-res cameras, dual mics, and other features add appeal.

relatively affordable art tablet with screen
portable, lightweight
cameras do OK in low light
Pen and tablet are both fast and responsive

The screen resolution is not that high.
Atom processor works pretty well, but is not as fast as a full computer when you run graphics-heavy full Windows programs.
Cannot access battery.

I found them pleasant and professional when I did a chat to ask questions. If you happen to get a faulty one, Toshiba or Amazon will send you a new tablet.

This is an exciting development in tablets. It would be great if there were one that was a little larger. But this is a great portable sketchbook with pressure sensitivity that allows you to run both desktop and Metro apps. You can also use OneNote, play games, watch videos, and use a Bluetooth keyboard. I don’t see it as quite a Cintiq replacement, because of the size and there is not as much memory as with a full computer, so large programs such as Photoshop would not be ideal, though you could run Photoshop to an extent. For artists, this is overall better than an Android tablet or iPad because of the digitizer and ability to run desktop programs. It doesn’t have the great screen resolution of an iPad, but is more of a productivity tool.